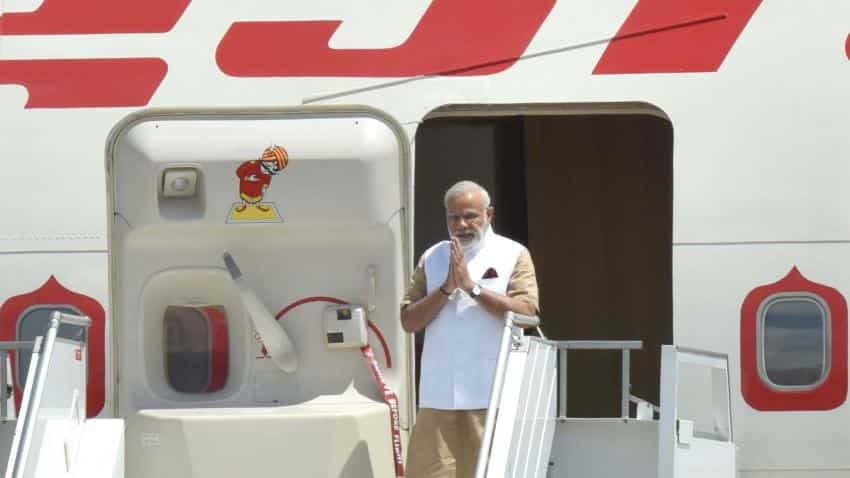 Prime Minister Narendra Modi will leave on a four-nation tour of Africa around midnight on Wednesday with the issues of energy, food security, trade, maritime cooperation and diaspora interactions high on his agenda.

Modi will visit Mozambique, South Africa, Tanzania and Kenya from July 7 to 11 on his first official visit to the African mainland.

In a pre-departure media briefing on Monday, Amar Sinha, Secretary (Economic Relations) in the Ministry of External Affairs, said Modi's visit will be the third segment of India's high-level engagement with Africa this year after Vice President Hamid Ansari`s visits to Morocco and Tunisia and President Pranab Mukherjee's visits to Ghana, Ivory Coast and Namibia.

This will be the first prime ministerial visit from India to Mozambique after the visit of then Prime Minister Indira Gandhi in 1982.

The issues of energy and food security are expected to figure in the discussions.

Mozambique is the third largest exporter of natural gas after Qatar and Australia.

A memorandum of understanding (MoU) on purchase of pulses from Mozambique for India and another on civil aviation are expected to be signed.

After interacting with members of the Indian community, which numbers around 20,000 in Mozambique, PM Modi will leave for South Africa.

This will be the first prime ministerial visit from India to South after the visit of then Prime Minister Manmohan Singh in 2013 for the BRICS summit in Durban.

On July 8, the Prime Minister's engagements will be in the twin cities of Johannesburg and Pretoria, South Africa's seat of power.

According to Sinha, contrary to reports appearing in the media, South Africa has been actively supporting India's bid for membership in the Nuclear Supplier Group (NSG).

Modi and Zuma will address a meeting of South African and Indian business leaders.

The Prime Minister will meet with associates of Mahatma Gandhi at the Constitution Hall in Johannesburg.

On July 8 evening, he will address an Indian diaspora rally at the Ticketpro Dome, Johannesburg's entertainment hub.

There are around 1.2 million people of Indian origin in South Africa.

On July 9, Modi will travel to Durban which is home to 800,000 people of Indian origin, making it the city with the largest Indian people outside India.

He will undertake a train journey to Pietermaritzburg in memory of the 1893 incident in which Mahatma Gandhi was thrown off a train compartment because of his skin colour.

The Prime Minister will also visit Gandhi's Phoenix Ashram and then meet with leaders of the African National Congress (ANC).

On July 9 evening, he will leave for Tanzania on the first prime ministerial visit from India to that country after the visit of then Prime Minister Manmohan Singh in 2011.

On July 10, Modi will hold bilateral discussions with Tanzanian President John Pombe Joseph Magufuli which will be followed by the signing of agreements.

A major highlight of Modi's visit to Tanzania will be a meeting with a group of "solar mamas".

"Solar mamas" are women who have been trained in harnessing solar energy at the Barefoot College at Tilonia village in Ajmer, Rajasthan.

According to Sinha, Modi will be meeting a group of 40 or so solar mamas from different parts of Africa.

After interacting with members of Indian community, which numbers around 50,000 in Tanzania, Modi will leave for Kenya on July 10 evening on the fourth and final leg of his African tour.

This will be the first prime ministerial visit from India to that East African country since the visit of then Prime Minister Indira Gandhi in 1981.

After arriving in Nairobi, that same day Modi will address a diaspora rally at the Kasarani Stadium Complex. There are around 80,000 people of Indian origin in Kenya.

On July 11, the Prime Minister will visit the United Nations Office in Nairobi, one of the four major UN office sites where several different UN agencies have a joint presence.

He will hold bilateral discussions with Kenyan President Uhuru Kenyatta which will be followed by the signing of agreements.

Air connectivity and sports ties between the two countries are expected to be discussed.

Later, the Prime Minister will visit the University of Nairobi where he will pay homage to a statue of Mahatma Gandhi.

He will also address students of the university, which was originally set up by a group of Indian-origin people.

Following the conclusion of his engagements in Kenya, the Prime Minister will return to India.