Prime Minister Narendra Modi will next week launch the 10th city gas licensing round that will help extend coverage of CNG and piped cooking gas connections to 70 per cent of the population. 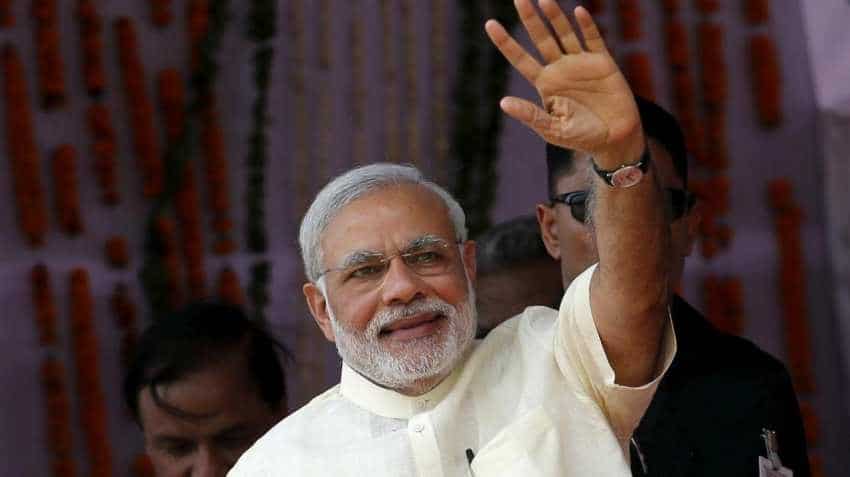 Modi through video conferencing will lay the foundation stones for 62 GAs during a function on November 22, Petroleum and Natural Gas Regulatory Board (PNGRB) Chairman said. Image courtesy: Reuters

New Delhi: Prime Minister Narendra Modi will next week launch the 10th city gas licensing round that will help extend coverage of CNG and piped cooking gas connections to 70 per cent of the population.

Modi will also lay foundation stones marking the beginning of work for city gas networks in at least 62 cities, licences for which were given out in the previous bidding round that concluded a couple of months back, oil regulator PNGRB Chairman Dinesh K Sarraf told reporters here.

In the 10th bid round for giving licences to retail CNG to automobiles and piped natural gas to household kitchens, 50 geographical areas or GAs spread over 124 districts in 14 states, covering 24 per cent of India's population and 18 per cent of its area, are being offered, he said.

In the ninth bid round, 86 GAs spread over 174 districts in 22 states and union territories and covering 26 per cent of India's population and 24 per cent of its area were offered. Of these, 78 GAs have been awarded to companies like Adani Gas, Indian Oil Corp (IOC), Bharat Petroleum Corporation Ltd (BPCL) and Torrent Gas.

Modi through video conferencing will lay the foundation stones for 62 GAs during a function on November 22, Petroleum and Natural Gas Regulatory Board (PNGRB) Chairman said.

First CNG station or a piped natural gas connection in the GAs awarded in the previous round will take at least 1-2 years to become operational. "In the two rounds (9th and 10th), we have covered 50 per cent of India's population and 42 per cent of the area," he said.

The government is targeting raising share of natural gas in the primary energy basket to 15 per cent from current 6.2 per cent, in the next few years and the bid rounds are aimed at fulfilling that objective. Bids for the 10th round will close on February 5 and areas will be awarded by end of February, he said.

The GAs awarded in the 9th round and to be offered in the 10th are the ones that lie close to natural gas pipelines, he said adding companies have been given 8 years for the complete rollout of city gas infrastructure in their awarded cities.

"Future bid rounds will be slower and smaller as new areas can be offered only when gas pipeline is laid to connect them to gas grid," he said. "Next round will happen after some gap."

For companies to retail CNG to automobiles or supply piped natural gas to household kitchens, natural gas - either imported on ports or found below the earth's surfaces, mostly in offshore - has to be transported to consumption centres through pipelines.

Currently, western and northern India are well connected with cross-country pipeline and only couple of years back the work on connecting the eastern part with pipeline has begun.

Like in the 9th round, bidders in the 10th round will have to quote the number of CNG stations to be set up and the number of domestic cooking gas connections to be given in the first eight years of operation.

Also, they have to quote the length of pipeline to be laid in the GA and the tariff proposed for city gas and compressed natural gas (CNG), he said.

Cities on offer in the 10th round include Nellore in Andhra Pradesh, Muzaffarpur in Bihar, Kaithal in Haryana, Mysore and Gulbarga in Karnataka, Allapuza and Kollam in Kerala, Ujjain, Gwalior and Morena in Madhya Pradesh, Jhansi and Basti in Uttar Pradesh, Firozpur and Hoshiarpur in Punjab, Ajmer and Jalor in Rajasthan, Nainital in Uttarakhand and Darjeeling and Howrah in West Bengal.

The net worth eligibility goes down with population, with a Rs 5 crore net worth firm being eligible to bid for GAs that have less than 10 lakh population.  The winning company would have 8 years of marketing exclusivity in the given city. Licences given prior to the 9th round provide for 5 years of exclusivity.

In the 9th round, which closed in July, billionaire Gautam Adani's group, IOC, BPCL and Torrent Gas were the big winners. Adani Gas won rights to retail CNG to automobiles and piped cooking gas to households and industries in 13 cities on its own and another nine in a joint venture with IOC.

Prior to the 9th round, 91 GAs were awarded to firms like Indraprastha Gas and GAIL Gas, which are serving 240 million population, 42 lakh domestic consumers and 31 lakh CNG vehicles.  Of these, 56 GAs were awarded through bidding rounds and the rest on government nomination.