PM Narendra Modi says not afraid of being seen with industrialists, opposition hits back

The opposition has been critical of Modi government`s inaction while persons like Vijay Mallya, Nirav Modi, Choksi, Jatin Mehta and Lalit Modi easily flew out of the country after being accused of committing huge financial frauds. 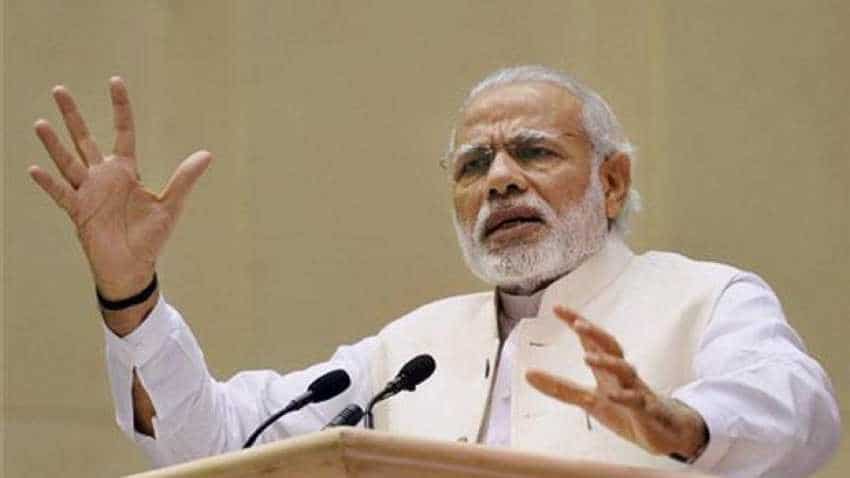 Congress responded to his remarks saying he should not lend his legitimacy and respectability to "crony capitalists". Image source: PTI
Written By: PTI
RELATED NEWS

Hitting back for the first time at critics who questioned his perceived friendly relations with corporates, Prime Minister Narendra Modi on Sunday said that unlike "some people" he was "not afraid of" publicly standing beside industrialists and business magnates because his intentions were "noble".

In response, the Congress responded to his remarks saying he should not lend his legitimacy and respectability to "crony capitalists" while Delhi Chief Minister and Aam Adami Party leader Arvind Kejriwal called it "an unsuccessful try" as people were now raising questions.

In his address at a government-industry interface in Lucknow as he inaugurated several development projects for Uttar Pradesh, Modi said industrialists too contribute to nation building and it was not right to label them all as thieves but those who do wrong "will have to leave the country" or live in jail.

"We are not the people who will be afraid of standing beside industrialists. You would be knowing some people (who are such) that you would not find a single photo of them with an industrialist/businessman. But there is not a single businessman in this country who would not have gone to these people`s places and bowed to them in reverence," he said.

"If your intentions are noble, you won`t be tainted no matter with whom you are standing," Modi said, adding that Mahatma Gandhi never had any qualms about living in the Birla household.

The opposition has been targeting Modi over his picture at Davos economic forum in January this year with fugitive diamondaire Nirav Modi who is at the centre of multi-thousand crore Punjab National Bank (PNB) scam besides the Prime Minister`s perceived closeness with another fugitive, Mehul Choksi, whom he once publicly addressed as "Mehul bhai".

The opposition has also been critical of Modi government`s inaction while persons like Vijay Mallya, Nirav Modi, Choksi, Jatin Mehta and Lalit Modi easily flew out of the country after being accused of committing huge financial frauds.

The Congress has of late also targeting Modi for allegedly giving the offset contract in the Rafale jet deal with France to "one of his corporate friends" at the expense of state-owned Hindustan Aeronautics Ltd.

"Mahatma Gandhi never hesitated standing beside (Ghanshyam Das) Birlaji because his intentions were right. But those who do things behind the curtain and wish not to be seen publicly (with corporates), they are afraid," Modi said.

"Just as much as the labour of a farmer, an artisan, a banker, a government employee or a labourer goes into the making of the nation, the efforts of industrialists too have a role in nation building. Should we insult them, call them thieves and robbers? Is this the way?

"But yes, whoever (among corporates) does the wrong, he will either have too leave the country or live in jail. This would not happen earlier because a lot happened behind the curtains then."

Addressing a media conference in Delhi later, Congress spokesperson Manish Tewari said "If the Prime Minister feels alright to be photographed with such people, who allegedly ripped off the banking system, and run away to Antigua and London or probably disappear from the earth, then I leave it to the Prime Minister`s wisdom to lend his legitimacy and respectability to such people."

Tewari also hit out at Modi for comparing himself with Mahatma Gandhi.

Kejriwal questioned Modi`s closeness with those who looted the country and all the investigating agencies failed to nab.

"Giving a contract of the Air Force to a 10-day old company and whose owner is a friend of PM. All these are raising questions among the people. Sir, your clarification is unsuccessful try," he said in a tweet in Hindi.