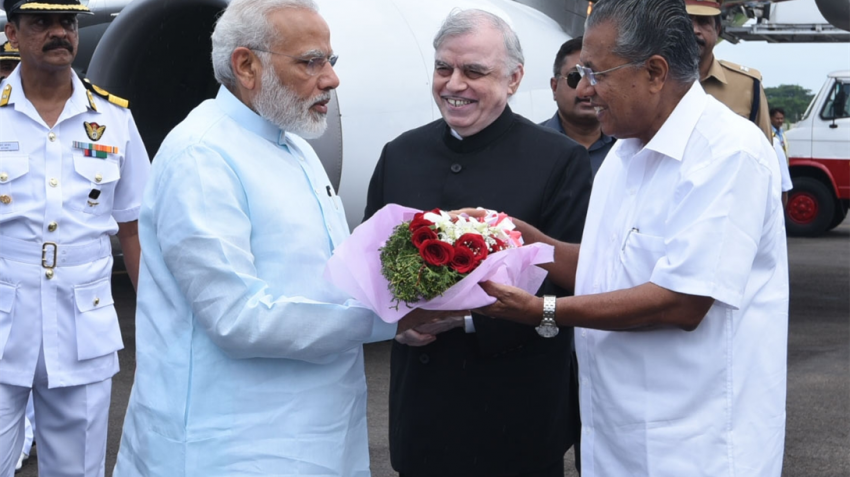 Prime Minister Narendra Modi being received by the Governor of Kerala, Justice (Retd.) P. Sathasivam and the Chief Minister of Kerala, Pinarayi Vijayan on his arrival, at Kochi, in Kerala on June 17, 2017. Image Source: IANS
Written By: PTI
RELATED NEWS

Soon after his arrival at the Naval airport here from New Delhi, Modi drove to the Palarivattom station and took a ride from Palarivattom to Pathadippalam.

After cutting the ribbon at the Palarivattom station, Modi shook hands with the chief minister and Sreedharan before proceeding to board the metro train.

During the journey, Modi waved at the crowd as Sreedharan and Kochi Metro Rail Ltd Managing Director Elias George interacted with him.

After the train ride, the dignitaries left for the Jawaharlal Nehru Stadium at nearby Kaloor for the formal inaugural function.

Considered the fastest completed metro project in the country, Kochi Metro, the flagship transportation infrastructure project of Kerala, will start its regular operations from June 19.

The estimated completed cost of the metro touched Rs 5,181.79 crore.

A long-cherished project of Keralites, the foundation of Kochi Metro was laid by then Prime Minister Manmohan Singh on September 13, 2012.

It will improve regional connectivity and reduce traffic congestion.