Modi earlier said the Chandrayaan-2 mission was "Indian at heart, Indian in spirit! What would make every Indian overjoyed is the fact that it is a fully indigenous mission". 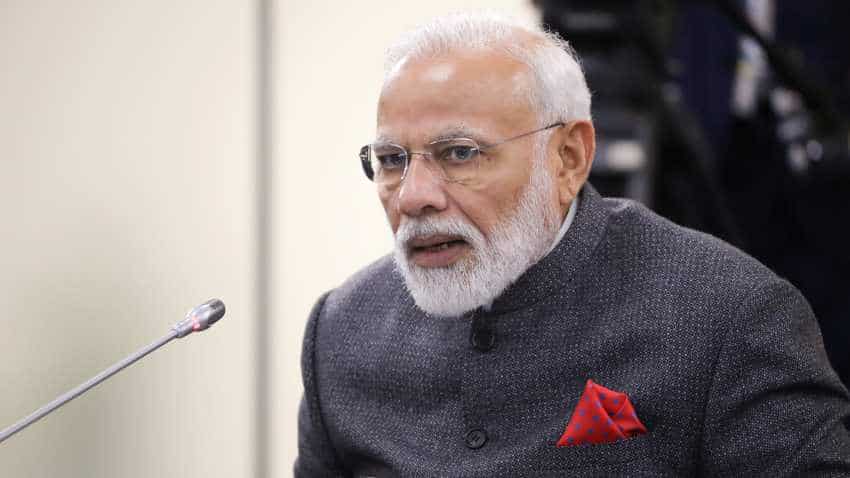 Officials said Modi`s visit to ISRO will boost the morale of its space scientists and inspire the youngsters to develop an inquiring spirit .Image source: Reuters

Officials said Modi will witness the final descent of Chandrayaan-2 on the lunar south pole from Satellite Control Centre (SCC), ISRO Telemetry, Tracking and Command Network (ISTRAC). He will also interact with the winners of the `space quiz`, which was conducted for students between classes 8 and 10 to coincide with the event.

Officials said Modi`s visit to ISRO will boost the morale of its space scientists and inspire the youngsters to develop an inquiring spirit .

Modi earlier said the Chandrayaan-2 mission was "Indian at heart, Indian in spirit! What would make every Indian overjoyed is the fact that it is a fully indigenous mission".

Prime Minister Narendra Modi flew here on Friday night to witness the historic landing of the Chandrayaan-2 mission`s lunar lander Vikram with rover Pragyan in it on the moon early on Saturday, an official said.

"Modi landed at the Yelahanka base of the IAF on the city`s northern outskirts at 9.40 p.m. for an overnight stay at a star hotel, which is near to the space agency`s network centre to witness Vikram`s landing on the moon between 1.30-2.30 a.m.," an official told IANS here.

"Modi will drive to the Indian Space Research Organisation`s (ISRO) Telemetry, Tracking and Command Network (Istrac) in the Peenya industrial area of the city`s northwest suburb by 1.00 a.m. and return to the hotel after watching the landing by 3.00 a.m. for rest," added the VIP protocol official.

As India`s first moon lander Vikram is all set to land on the moon on early on Saturday, Tamil Nadu`s Sona College revealed its Special Electrical and Electronics Drives Division (SPEED) supplied three products that are its parts, including two vital components that will allow its smooth landing on the moon and collection of soil and rock samples.

These products are the fuel mixer motors that mix liquid oxygen with fuel, the Doppler mechanism for Vikram module to guide the laser to ensure smooth landing on the moon and the Sona Mechanical Research team-built robotic arm for picking sand and rock samples from the moon, the Salem-based institution said.

"Today is an exceptionally proud day for researchers from Sona College of Technology as years of intense indigenous research effort have contributed, in a small way, to smooth landing of Chandrayan-2. These efforts will go a long way in India`s quest to unravel what is on the moon," said Chocko Valliappa, Vice Chairman, Sona College of Technology.

This is not the first time that the institute has supplied the components to the Indian Space Research Organisation (ISRO).

The pioneering research and development efforts of researchers at Sona College`s SPEED Division have led to the institute supplying the Indian space agency with special-purpose BLDC (brushless DC) motors for satellites and rockets as well as lunar robot for many earlier space missions.

The Department of Science and Technology (DST) has recognised Sona as a Scientific and Industrial Research Organization (SIRO).