Addressing the G-20 Summit here, Prime Minister Narendra Modi equated Lashkar-e- Taiba and Jaish-e-Mohamamd to ISIS and Al-Qaeda, saying their names may be different but their ideology is the same. 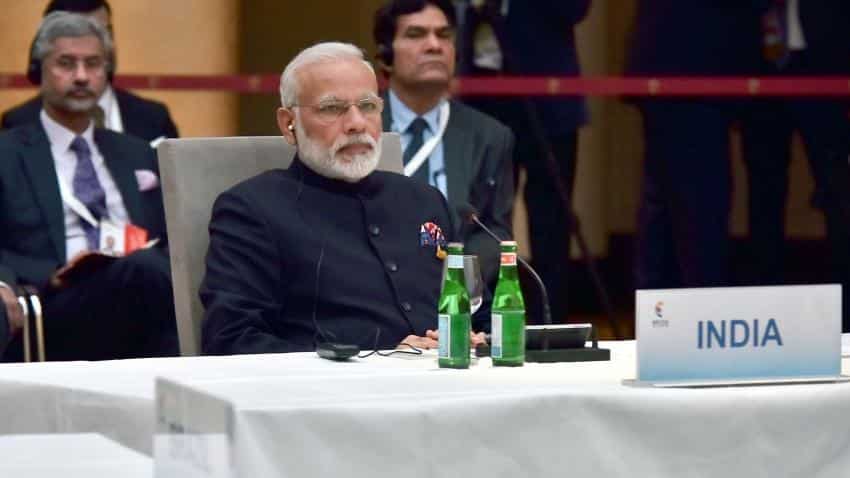 Prime Minister Narendra Modi at the informal meeting of leaders of the BRICS countries on the sidelines of the 12th G-20 Summit in Hamburg, on July 7, 2017. Photo: IANS
Written By: PTI
RELATED NEWS

Naming Pakistan-based terror groups LeT and JeM, Prime Minister Narendra Modi today said some countries were using terror as a tool to achieve political objectives and pressed for "deterrent" action collectively by the G-20 members against such nations.

Addressing the G-20 Summit here, he equated Lashkar-e- Taiba and Jaish-e-Mohamamd to ISIS and Al-Qaeda, saying their names may be different but their ideology is the same.

With leaders like US President Donald Trump, Russian President Vladimir Putin and Chinese President Xi Jinping listening, Modi regretted that the international response to terrorism was weak and said more cooperation was needed to fight the menace.

The Indian prime minister presented an 11-point 'Action Agenda' which included suggestions for exchange of lists of terrorists among G-20 nations, easing and expediting of legal processes like extradition and concrete steps to choke funds and weapon supply to the terrorists.

"Some nations are using terrorism for achieving political goals," Modi said in a clear reference to Pakistan.

He named LeT and JeM as terror operatives in the South Asia like Daesh (ISIS) and Al-Qaeda in the Middle East and Boko Haram in Nigeria. "Their only ideology is to spread hatred and commit massacres," he added.
Regretting that the international response to terrorism has been "weak", Modi said the nations are less networked in dealing with the menace while the terrorists are better networked.