To cooperate in the field of manpower, India and the UAE signed an MoU that aims to institutionalise the collaborative administration of contractual employment of Indian workers in the Gulf country. 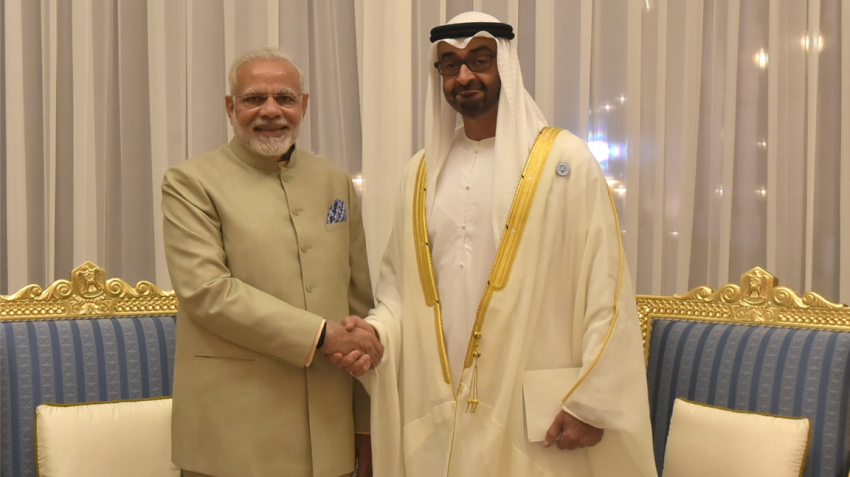 Modi, who arrived here from Jordan on the second leg of his three-nation tour, was received by Mohammed Bin Zayed and other members of the Royal family at the airport. The two leaders hugged each other and exchanged pleasantries.

The Prime Minister thanked the Crown Prince for the special gesture of receiving him at the airport and said his visit will have a positive impact on India-UAE ties.

"We warmly welcome our state guest and valued friend, the Indian Prime Minister H.E.@narendramodi to the UAE. His visit reflects our longstanding historical ties and is testament to our friendly bilateral relationship," Mohammed Bin Zayed, also the Deputy Supreme Commander of the UAE Armed Forces, tweeted.

Prime Minister Modi, who is here on his second visit to the UAE, held wide-ranging talks with and Mohammed Bin Zayed. Modi had first visited the UAE as prime minister in August, 2015.

An MOU between Indian Consortium (OVL, BPRL & IOCL) and Abu Dhabi National Oil Company (ADNOC) was signed for the acquisition of a 10 per cent participating interest in the Abu Dhabi's offshore Lower Zakum Concession, a statement issued by the Indian embassy here said.

The concession will be for 40 years from 2018 to 2057. Sixty per cent of the participating interest will be retained by ADNOC and remaining 30 per cent will be awarded to other international oil companies, the statement said.

"This is the first Indian Investment in upstream oil sector of UAE, transforming the traditional buyer-seller relationship to a long-term investor relationship," it added.

To cooperate in the field of manpower, India and the UAE signed an MoU that aims to institutionalise the collaborative administration of contractual employment of Indian workers in the Gulf country.

Under the MoU, both the sides will work to integrate their labour related e-platforms for ending the existing malpractices, combat trafficking and organise collaborative programs for education and awareness of contractual workers.

An MoU for technical cooperation in railways was also signed between the two sides. The MoU aims at cooperation in infrastructure sector especially railways.

"The MoU will facilitate development of joint projects, knowledge sharing, joint research and technology transfer. The MoU envisages formation of a Joint Working Group for institutionalising the cooperation mechanism," the statement said.

To deepen bilateral cooperation in the field of finance, an MoU between Bombay Stock Exchange and Abu Dhabi Securities Exchange was also signed. It aims at enhancing cooperation between both the countries in financial services industry.

The MoU would facilitate investment in financial markets by investors from both the countries.

An MoU between Government of Jammu and Kashmir and DP World was also signed to establish multi-modal logistics park and hub in Jammu comprising warehouses and specialised storage solutions.

Various buildings in Abu Dhabi were lit in the Indian tricolor as the city was decked up to welcome Prime Minister Modi, who also attended a state banquet hosted by the Abu Dhabi Crown Prince.

The Prime Minister will visit Wahat Al Karama, the UAE martyr's war memorial here, tomorrow before travelling to Dubai where he will interact with the Indian community at an event at the Dubai Opera House and will witness the groundbreaking ceremony of the first Hindu temple in Abu Dhabi. The ceremony will be live-streamed to the Opera House.

Prime Minister Modi will also deliver a keynote address at the World Government Summit in Dubai where India is a guest of honour this year. He will make inaugural address on the theme: 'Technology for development'.

On the first led of his trip, Modi earlier in the day travelled to Ramallah, becoming the first Indian Prime Minister to make an official visit to Palestine.

In Ramallah, Prime Minister Modi met Mahmoud Abbas during which the Palestinian President sought India's support for a multi-country mechanism to achieve a "just and desired peace" with Israel in accordance with the two-state solution.

They discussed the full range of India-Palestine ties following which the two sides signed six agreements worth around USD 50 million that includes setting up of a USD 30 million super speciality hospital in Beit Sahur. From the UAE, Modi will travel to Oman.