Indian-origin MIT professor Abhijit Banerjee, his wife Esther Duflo, along with Harvard professor Michael Kremer have been awarded the 2019 Nobel Prize in Economics. 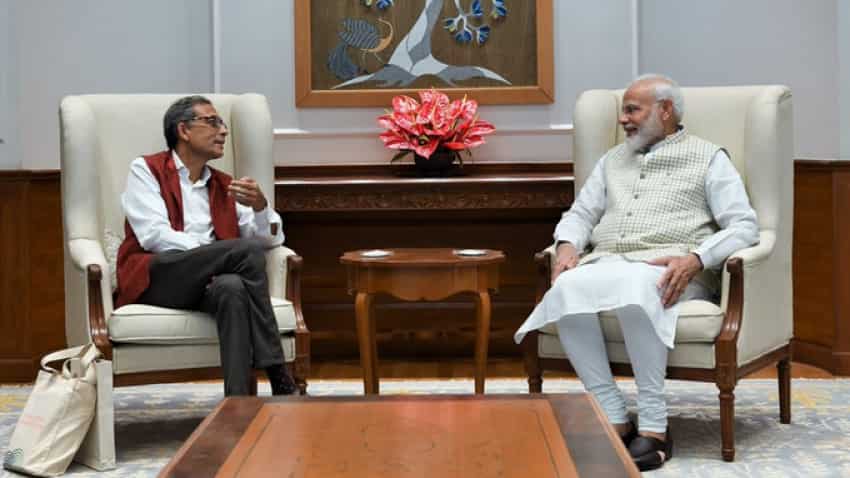 Abhijit Banerjee, who has authotred a large number of articles and books, is a past President of the Bureau for the Research in the Economic Analysis of Development. Image source: Twitter/Narendra Modi
Written By: ZeeBiz WebTeam
Edited By: Harish Dugh
RELATED NEWS

Prime Minister Narendra Modi today met Nobel Laureate Abhijit Banerjee, and appreciated his passion as well as his vision for human development. Referring to their discussion, Prime Minister tweeted, "Excellent meeting with Nobel Laureate Abhijit Banerjee. His passion towards human empowerment is clearly visible. We had a healthy and extensive interaction on various subjects. India is proud of his accomplishments. Wishing him the very best for his future endeavours."

Notably, Dr Banerjee had worked in Gujarat when PM Modi was Chief Minister. In an interview with a news channel, Banerjee said that he had an "excellent experience".

"In just two decades, their new experiment-based approach has transformed development economics, which is now a flourishing field of research," the Academy said.

Born in Mumbai in 1961, Bannerjee is one of the leading development economists and is presently working as a professor of economics at the Massachusetts Institute of Technology (MIT). Banerjee graduated in science from the Calcutta University in 1981 before moving to the Jawaharlal Nehru University in New Delhi from where he completed his MA in 1983. He received his PhD from the Harvard University in 1988.

Abhijit Banerjee, who has authored a large number of articles and books, is a past President of the Bureau for the Research in the Economic Analysis of Development, a research associate of the NBER and a CEPR research fellow, international research fellow of the Kiel Institute, a fellow of the American Academy of Arts and Sciences and the Econometric Society. He has also been a Guggenheim Fellow and an Alfred P. Sloan Fellow and a winner of the Infosys prize.