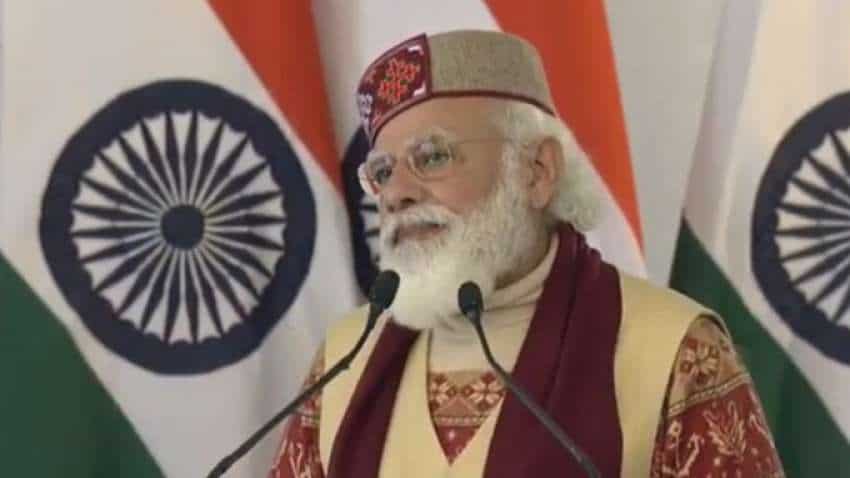 Atal Tunnel Inauguration: Prime Minister Narendra Modi inaugurated the much-awaited Atal tunnel today in Rohtang, Himachal Pradesh. Atal Tunnel cuts distance between Manali and Leh by 46 km and travel time by 5 hours. While inaugurating the horseshoe-shaped world's longest highway tunnel, PM Modi said that today the vision of former PM Atal Bihari Vajpayee is coming true. PM Modi said, "It is a historic day; not only dream of Atal ji realised but also decades-long wait of people of Himachal is over." He added, "Not just Himachal Pradesh, Atal Tunnel will be a lifeline for Leh-Ladakh."

PM Modi said. He also thanked the BRO and other professionals involved in the Atal Tunnel making for transforming the impossible into a reality. PM Modi said, "By 2013-14, only 1300 meters of tunnel was built; experts say had work been done at this speed, it would have been completed by 2040."

Modi added, "Nothing more important to us than protecting country; but there was an era when defence interests were compromised."

Pointing towards the border aggression of China in the region Rajnath Singh, Union Minister for Defense, Government of India said, "Atal Tunnel is going to help the public in general during peacetime while it will help our armed personnel during the war time." He thanked the Border Road Organisation (BRO) for completing the project within the allocated fund.

Himachal Pradesh Chief Minister Jairam Thakur said, "The vision of former Prime Minister of India Atal Bihari Vajpayee is getting complete today. This tunnel will help tourism to grow as it will make transportation smooth and fast in major tourist spots in the region. In fact, some more tourism spots will emerge due to the Atal tunnel." He thanked PM Modi and Defense Minister Rajnath Singh for taking personal interest in getting the tunnel inauguration done amid COVID-19 challenge.

While it will boost tourism and other business activities in the region, the tunnel has importance from a defense perspective as well because it will make it possible for the armed forces to move from one post to another in the border region.

1] Atal Tunnel is brain child of Atal Bihari Vajpayee who took the decision to construct Atal Tunnel was taken on June 3, 2000. The foundation stone for the tunnel was laid on May 26, 2002.

2] On 25 December 2019, the Rohtang tunnel was renamed as Atal Tunnel in the memory of Atal Bihari Vajpayee.

3] Atal Tunnel is located at a distance of 25km from Manali at an altitude of 3,060 meters.

4] The 9.02km long tunnel has been built with ultra-modern specifications in the Pir Panjal Range of the Himalayas.

5] Atal Tunnel, which is the longest highway tunnel in the world, reduces the road distance by 46km between Manali and Leh and the travel time by about four to five hours.

6] It is a horseshoe-shaped, single tube double lane tunnel with a roadway of 8 metres and an overhead clearance of 5.525 metres.

8] The tunnel is 10.5-metre wide and a 3.6x2.25 metre fireproof emergency egress tunnel has been built into the main tunnel itself.