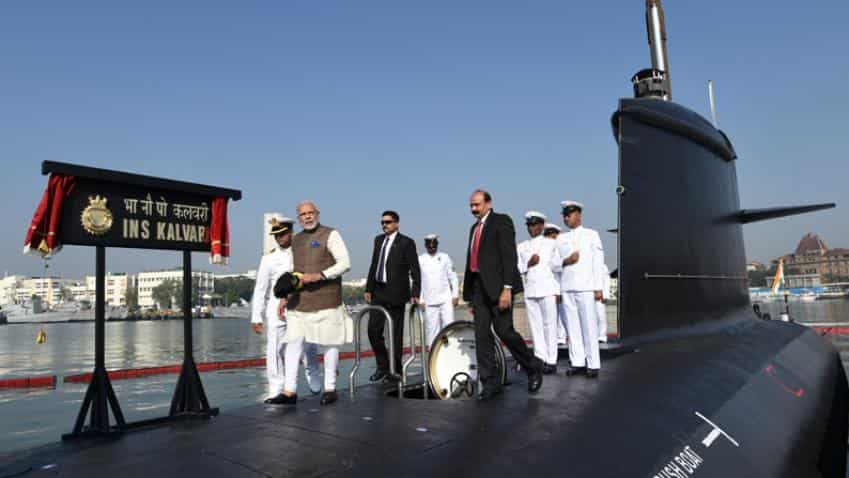 Prime Minister Narendra Modi today commissioned the first of the six Scorpene-class submarine Kalvari into the Indian Navy and said its induction was a big step in the country's defence preparedness.
Modi boarded the submarine and unveiled its plaque, after meeting veterans of the first Kalvari who were present at the ceremony.

"Kalvari is an excellent example of our 'Make in India' programme," he said, speaking at the commissioning ceremony here this morning.

Modi thanked France for this 'strategic joint project' and described the commissioning of the submarine as a "matter of pride" for 125 crore Indians. "It is a matter of pride for me to commission this submarine. Kalvari's induction in the Navy is a big step in defence preparedness," Modi said.

Kalvari is named after the dreaded tiger shark, a deadly deep sea predator of the Indian Ocean. "The power of Kalvari, that of a tiger shark, will strengthen our Navy," the prime minister said.

He said India has always been the first responder in times of crisis for neighbours, be it floods, water shortage or cyclones, in Sri Lanka, Maldives or Bangladesh.

Modi also dwelt on the 'sabka saath sabka vikas' motto of his government and cited the successful tackling of terrorism and Naxal threats. "So far this year, around 200 terrorists have been killed by police and security forces in Kashmir. There has been a reduction in the number of stone pelting incidents there," he said.

He said, "There has also been a decline in Naxal violence. This shows people are veering towards the path of development."

"India has proven its capability to build submarines for the past 25 years. These are highly significant steps in the direction of 'Make in India' and 'Skill India'. Making submarines benefits industry not only by itself through orders but also through stringent quality control," she said.

The submarines, designed by French naval defence and energy company DCNS, are being built by Mazagon Dock Limited (MDL) in Mumbai as part of Project-75 of the Indian Navy.

"The technology utilised in the Scorpene has ensured superior stealth features such as advanced acoustic silencing techniques, low radiated noise levels, hydro-dynamically optimised shape and the ability to launch a crippling attack on the enemy using precision guided weapons," an official of the MDL said.

The first Kalvari, commissioned on December 8, 1967, was also the first submarine of the Indian Navy. It was decommissioned on May 31, 1996 after nearly three decades of service.

Need to focus attention on use of technology in health sector: PM Modi