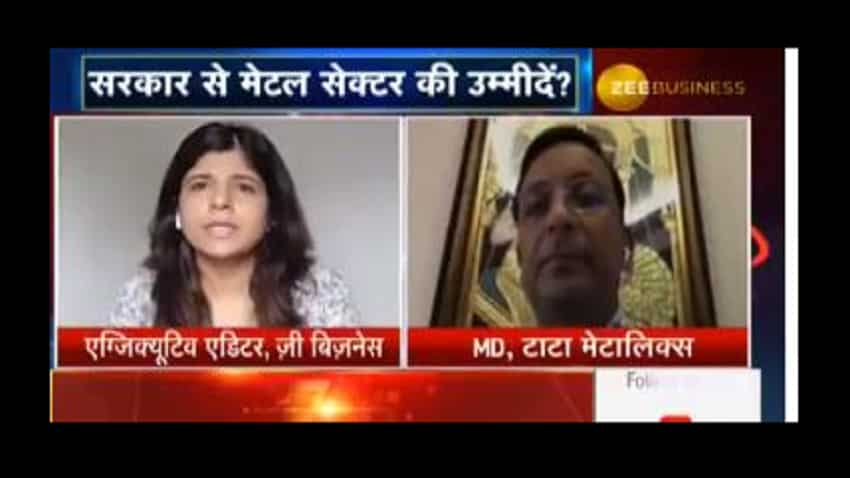 Sandeep Kumar, Managing Director at Tata Metaliks Ltd, talks about the March quarter results, impact of lockdown in Q1FY21 and order book among others during a candid chat with Swati Khandelwal
Written By: Jitesh Kumar Jha
RELATED NEWS

Sandeep Kumar, Managing Director at Tata Metaliks Ltd, talks about the March quarter results, impact of lockdown in Q1FY21 and order book among others during a candid chat with Swati Khandelwal, Zee Business. Edited Experts:

Q: Congratulations for good results in March quarter FY20. Please tell us about the growth drivers that contributed to this growth?

A: Basically, three reasons led to profit in the fourth quarter and they are:

These were the three factors that improved our operating profit by at least 70% when compared to the corresponding fourth quarter of the last year as well as the sequential quarter.

Q: Can you quantify the kind of impact that lockdown had on your business in Q1FY21 and what is your outlook for this quarter?

A: Everyone is aware of the kind of impact lockdown - announced in the last week of March 2020 - had on almost every economic activity and we are not an exception. So, our plants were shut till early May 2020 and restarted around May 10, 2020, from the production point of view. May has been well for us but not very good but a lot of growth was seen in June and things have progressed well in the month. Thus, there is a cause for optimism. The demand for pipes in June can be compared virtually with our pre-lockdown period. Now, both of our blast furnaces are running at 100% capacity. Even the pipe plant is also running at 100% capacity. But obviously, an impact will be felt in the quarter because April was virtually zero and it just started in May. We are doing well in June but April and May were not good and that’s why you can guess what quarter one (Q1) would be like.

Q: Two months have been difficult but demand was seen in June. Do you think that it can be a pent-up demand, which can temper down in the recent future?

A: If you would talk about the pipe plant then its business is dependent on government expenditure, i.e. government investment on water and sanitation. Our estimates suggest that there will be an improvement in demand when compared to the demand for the last 3-4 months. The demand was quite weak last year but Odisha was the state which supported the demand that year. Based on the announced projects, good demand is expected from other states like Uttar Pradesh, Madhya Pradesh, and Andhra Pradesh, this year but there is a need to convert them on the ground. That’s why we will have to wait and see the level to which they are implemented but the initial hints are quite good concerning the demand of the pipes.

Secondly, as far as demand for pig iron is concerned then it hasn’t recovered completely yet and the 100% capacity about which I was talking was related to plant capacity from the supply side. From the demand side, demand for the pipe is quite good and we will have to see how long it remains. While demand for pig iron stands around 50-60% at present due to unavailability of labours in many foundries, we are dependent on migrant labours as well as non-availability of permission in many locations. So, they are returning slowly and demand has reached the mark of 50-60%. What the future holds will completely depend on what form the virus takes next. But, I am quite optimistic about the demand for pipes.

Q: Can you tell us about your order book and what numbers were anticipated at the start of the year? What is your outlook for the order book?

A: Generally, we have order books for 9-10 months but it is slightly low at present as nothing special, like bookings and other things, have occurred in the last two-three months. So, we have an order book of around 6-7 months in the pipe business. As far as pig iron is concerned than is it is a month-on-month business that’s why I don’t think that we should discuss it but we have a business of 6-7 months in the pipe segment.