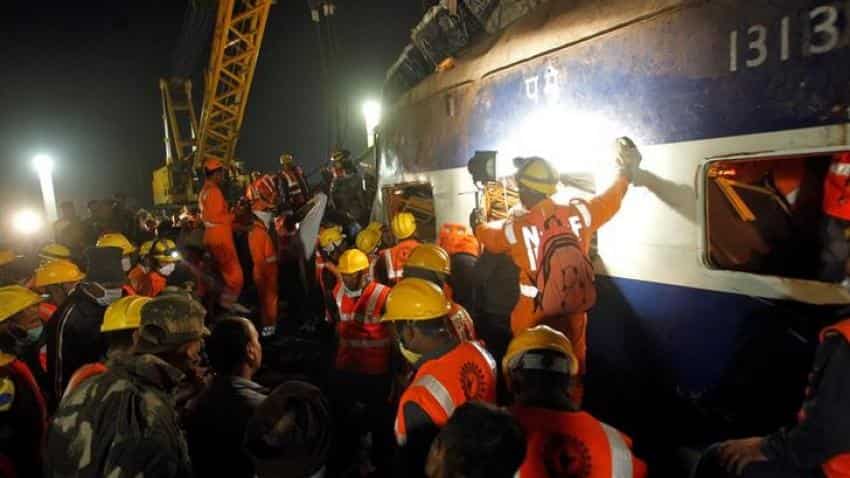 Rescue workers search for survivors at the site of a train derailment in Pukhrayan, south of Kanpur city. Image Source: Reuters

Rescue workers picked their way through the last of the mangled carriages of a derailed train on Monday to pull out more bodies from a disaster that killed at least 133 people and injured more than 200.

The derailment was India`s deadliest train crash since 2010 and has renewed concern about the poor safety standard of the state-run network, which is a lifeline for millions of Indians but has suffered from chronic underinvestment.

The largely colonial-era system, the world`s fourth largest, carries about 23 million people every day. But it is saturated and ageing badly. Average speeds top just 50 km/h and train accidents are common.

Sunday`s crash is a stark reminder of how hard it will be for Prime Minister Narendra Modi to fulfil his promise to transform the railways into a more efficient, safer network befitting India`s economic power.

Modi this year pledged record levels of investment and has announced a new high-speed line funded by Japan, but little progress has been made on upgrading tracks or installing modern signalling equipment on the main network.

He has also shied away from raising highly subsidised fares that leave the railways with next to nothing for investment - by some analyst estimates, the railways need 20 trillion rupees ($293.34 billion) of investment by 2020.

Police at the accident site in Uttar Pradesh said they were still searching through the last of 14 carriages that derailed in the early hours of Sunday while most of the more than 500 passengers were asleep.

"We have cleared 13 derailed carriages from the tracks but the last carriage is the most difficult to search," said Amit Chaudhary, a senior police official at Pukhrayan, 65 km (40 miles) from Kanpur. "Maybe seven or eight bodies are in the last carriage."

Railway official Amit Malvi said more than 150 people had been admitted to government hospitals and several were in critical condition.

Authorities are looking into the possibility a fractured track caused the train to roll off the rails on its journey between the cities of Patna and Indore.

Modi on Sunday held a political rally about 210 km from the site of the derailment. Uttar Pradesh heads to the polls early next year in an election his Bharatiya Janata Party is vying to win.