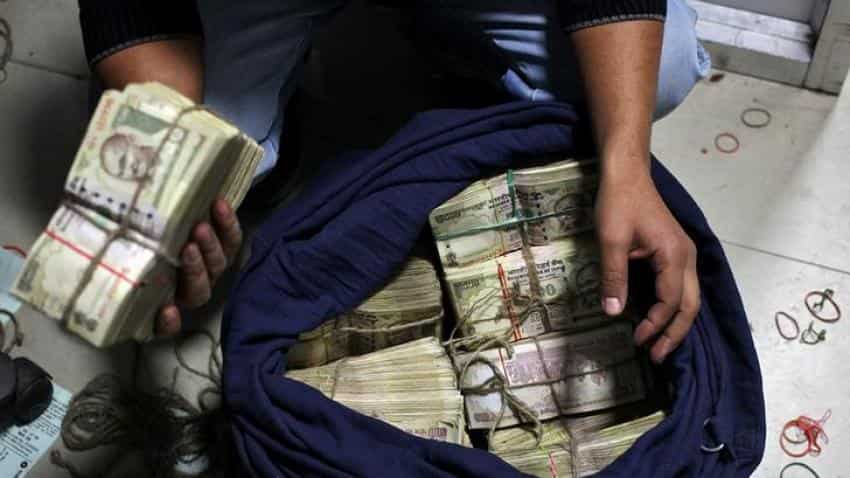 A bank employee takes out a bundle of old 500 Indian rupee banknotes from a sack to count them inside a bank in Jammu. Image Source: Reuters

India`s shock move to abolish high-value banknotes was expected to deliver a windfall to lenders, and banks have indeed seen coffers swell after people deposited Rs 12,40,000 crore ($183 billion) in cash into the system.

But while banks may benefit in the longer term, so-called "demonetisation" has hit them hard in the immediate aftermath, with demand for credit plummeting and additional costs incurred to make the transition.

Prime Minister Narendra Modi`s decision to remove Rs 500 and Rs 1,000 notes to funnel illicit cash into the formal financial sector has led to a severe cash shortage as the central bank has replaced barely a third of the higher-value notes that had been in circulation.

That has hit business confidence and dented demand for loans, hurting banks that were already battling the weakest loan growth in nearly two decades.

Not that they have resources to process loans anyway. Removing 86% of currency in circulation from Asia`s third-largest economy has proved harder than expected, and staff have focused mainly on customers changing old money for new.

"Our top priority is to provide relief to our customers, while lending could wait for some time," said Vaibhav Anand, who manages a branch of state-run Bank of India in Parliament Street, near Modi`s office in New Delhi.

For a sector that has long struggled with low profitability and sour loans currently totalling $136 billion, even a temporary hit is painful.

And the impact could be longer than expected, if businesses recover slowly.

The government needs a healthy banking sector to channel loans and fuel private investment to power an economy that grew 7.3% in July-September, the fastest pace among large countries but below 8% needed to sustain full employment.

Avtar Singh, owner of a small auto parts manufacturer in Ludhiana, in the northern state of Punjab, was applying to increase his credit limit to Rs 2 crore from Rs 1.5 crore n to expand his business.

Now, no bank official has time for him, and 40 of his 150 employees have stopped working since he can`t pay all the salaries.

"No bank is ready to give a new loan to us, as all of their staff are busy exchanging currency," said Singh.

State Bank of India (SBI) chairman Arundhati Bhattacharya told Reuters the country`s largest bank by assets would likely miss previous forecasts of boosting loans by at least 10 %in the year to March 31, although it would give a fresh outlook after the current quarter ends.

"Our (loan) sales teams are not operating in full force," said Bhattacharya, referring to the slowdown in retail loans.

She added that early repayments of outstanding loans from people using old notes also contributed to the overall credit slowdown.

"We will have to work full steam in the fourth quarter (January-March) to make up."

SBI shares have surged as much as 14.3% since Modi announced the measure on November 8. They have steadily lost ground, but are still up about 5% over that period.

Other banks are also likely to face difficulties, with bigger banks impacted more, given that smaller lenders had already been reducing their loan books as they focused on cleaning up balance sheets.

Jefferies, a brokerage, expected banking sector loan growth to fall to 6% in the year to March.

Banks are seeing temporary costs pile up, as they pay overtime to employees and hire additional security guards to manage crowds depositing old banknotes before a year-end deadline or swapping them for new ones.

Lenders also need to recalibrate cash machines after the government issued new banknotes that were different sizes to the abolished ones.

The Reserve Bank of India (RBI) has also ordered that banks waive fees for ATM transactions and card payments until the end of the year, depriving them of a lucrative source of income.

Banks had at least hoped that a rally in bond markets since Modi announced demonetisation would boost treasury gains, given lenders own around half of government debt.

But those hopes were dashed after the RBI unexpectedly held rates last week, sending markets lower.

Analysts still believe the longer term impact on banks could be positive, channelling more funds into the formal economy and driving up sales of credit cards and other services.

But Vinod Kathuria, an executive director at state-run Union Bank of India, said it would take at least two quarters for loan growth to return to normal.

For Singh, the small business owner, that will feel like an eternity.

"Small businesses have been ruined."