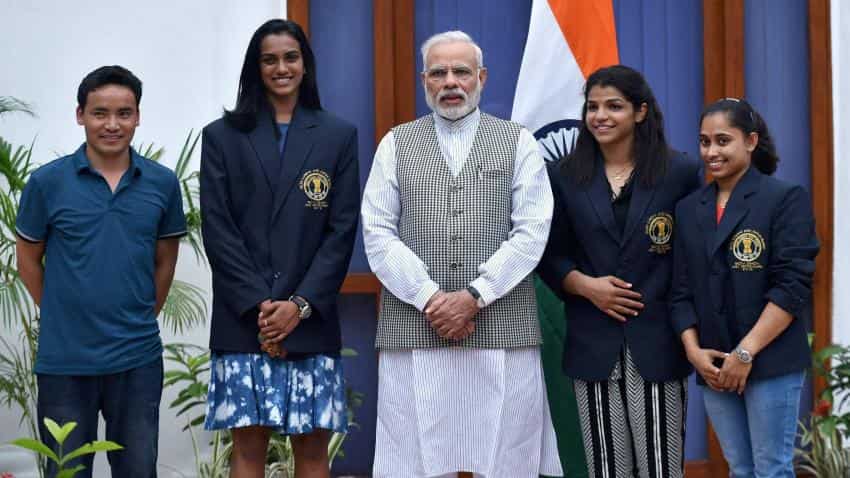 India celebrates National Sports Day on August 29 and on this day, the President of India, Pranab Mukherjee will present deserving Indian sportspersons with the Khel Ratna awards at the Rashtrapati Bhawan.

Indian athletes PV Sindhu, Sakshi Malik, Dipa Karmakar and Jitu Rai will be given the Rajiv Gandhi Khel Ratna awards for their performance in the recently concluded Rio Olympics 2016.

Along with these athletes, six coaches will be honoured with the Dronacharya Awards. The awardees include, Nagapuri Ramesh for athletics, Sagar Mal Dhayal for boxing, and Raj Kumar Sharma for cricket.

Prime Minister Narendra Modi, on National Sports Day, congratulated all the sports lovers across India and has expressed hope that sports and sportsmanship will always shine in our society.

“On National Sports Day I congratulate all sports lovers across India and hope sports and sportsmanship will always shine in our society” , the Prime Minister said.

On National Sports Day I congratulate all sports lovers across India & hope sports & sportsmanship will always shine in our society.

MYAS wishes you all a very happy #NationalSportsDay,celebrated in honour of hockey legend Dhyan Chand on 29th August pic.twitter.com/VTYLx4byOF

A total of 15 sportsmen, including those named above, will receive the prestigious Khel Ratna award on Monday.

Athletes like, cricketer Ajinkya Rahane, hockey player VR Raghunath, athlete Lalita Babar, boxer Shiva Thapa, and shooter Apurvi Chandela are some of the prominent names who will receive the Arjuna Award, which will be presented alongside the Khel Ratna and Dronacharya Awards at a special function at the Rashtrapati Bhawan on August 29.

Wrestler Sakshi Malik created history at the Rio Olympics by becoming the first Indian to win a bronze medal in women’s wrestling.

Pusarla Venkata Sindhu, also put up a good fight in her debut performance at the Olympics against Spain’s yet undefeated and world’s No. 1 player, Carolina Marin, in the badminton singles women tournament, winning a silver.

Dipa Karmarkar just missed the bronze medal at the Vaults final but won the hearts of many in Indians by qualifying for the apparatus finals of artistic Gymnastics at the Rio 2016 Olympics.

Recipients of Rashtriya Khel Protsahan Puruskar will be given trophies and certificates. Overall, top performing university in inter-university tournaments will be given MAKA Trophy, and award money of Rs 10 lakh and a certificate.