Earlier on Wednesday night, Chidambaram made a dramatic appearance at the Congress headquarters and addressed a press conference in which he rejected the charges against him and his son in the INX Media case and said "lies" were being spread by "pathological liars." 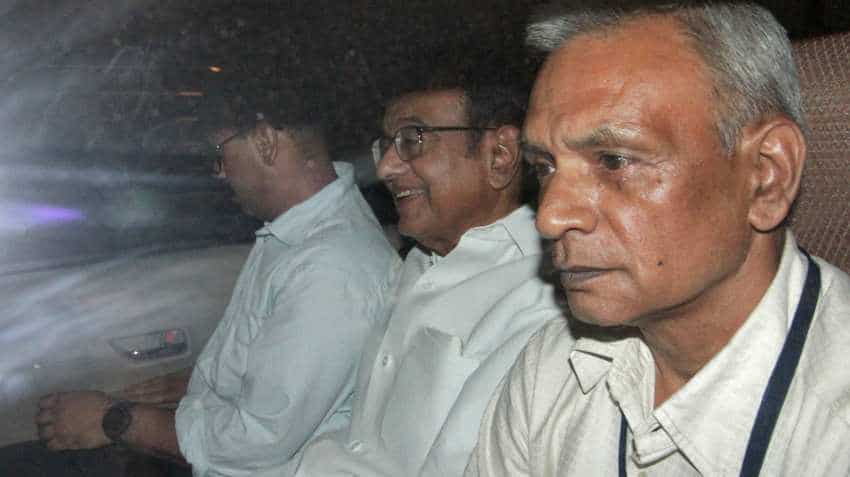 Karti Chidambaram has said that they will fight this "trumped-up and vindictive act" by a "pliant agency" politically and legally. Image source: Reuters

Earlier on Wednesday night, Chidambaram made a dramatic appearance at the Congress headquarters and addressed a press conference in which he rejected the charges against him and his son in the INX Media case and said "lies" were being spread by "pathological liars."

He then left for his Jor Bagh residence from the Congress office and teams of the CBI and the ED reached soon after. He was arrested in the glare of media after over an hour-long drama during which some officials scaled the gates to gain entry to his house. Supporters of the former Finance Minister raised slogans and tried to stop officials from taking him away. Some of them also blocked the road in protest.

CBI sources said that Chidambaram was arrested on an arrest warrant issued by a competent court.The CBI and ED filed caveats in the Supreme Court over Chidambaram`s plea seeking protection from arrest in the INX media case. Rejecting the charges against him and his son Karti in the INX Media case, Chidambaram said FIR does not impute any wrongdoing by him and there was no chargesheet either by the CBI or ED before the competent authority.

On late Tuesday night, the CBI had put up a notice outside his residence to appear before them in two hours prompting his lawyer to request the investigation agency not to take any coercive action until the hearing of Chidambaram`s plea in the Supreme Court on Wednesday.

After former Finance Minister P Chidambaram was arrested on Wednesday night, his son Karti Chidambaram has said that they will fight this "trumped-up and vindictive act" by a "pliant agency" politically and legally, adding "This is a totally vindictive and malicious act done by a pliant agency. This is only done to settle political scores."

"There is absolutely no necessity to have done this. It has been done only to create a spectacle on television and to tarnish the image of the Congress party, and to tarnish the image of the former Finance and Home Minister. This is a completely trumped-up case in which he has absolutely no connection whatsoever. This is being done only for political reasons," Karti told ANI in Chennai.

When asked about comparison with Union Home Minister Amit Shah`s arrest in 2010, Karti said, "I am not willing to make any kind of comparisons. I can only comment on the case pertaining to what is happening right now. All I can say is this is a completely trumped-up and vindictive act." He added, "He (P Chidambaram) has been on anticipatory bail since May last year. The judgment has been reserved since January. And all of a sudden the judgment which came out, I respectfully disagree with it and that is why we have appealed in the Supreme Court. The matter is coming up on August 23, now we will have to see its legal status. We will fight this out politically and legally."

Congress has rallied behind former union minister P Chidambaram who was arrested by CBI in INX media case, with party leaders Rahul Gandhi, Priyanka Gandhi Vadra strongly backing him and several senior leaders present at the press conference he addressed at the Congress headquarters after his dramatic appearance.

Party workers also reached Chidambaram`s Jor Bagh residence after CBI and ED teams reached there following the press conference at the AICC office. Congress communications department incharge Randeep Singh Surjewala termed his arrest a "shameless witch-hunt" and said, "democracy stands dead at the hands of BJP". "The shameless witch-hunt & unheard of abuse of CBI/ED by Modi Govt 2.0 is playing on every TV screen in India. It`s a sham and shame that democracy stands dead in the hands of the BJP," Surjewala said in a tweet.

Several other Congress leaders including Shashi Tharoor and Harish Rawat came out in support of Chidambaram. Tharoor, in his tweet, referred to remarks made by Chidambaram in an interview.

At the press conference on Wednesday night, Chidambaram was flanked by senior party leaders Kapil Sibal, Abhishek Manu Singhvi, Ghulam Nabi Azad, Ahmed Patel, Mallikarjun Kharge, Salman Khurshid, Vivek Tankha and KC Venugopal. Sibal and Singhvi were among lawyers who represented Chidambaram in the Supreme Court on his plea to get relief from CBI and ED`s pursuit of him in the INX media case. The matter was not heard by the court despite repeated efforts of his lawyers.

A member of Rajya Sabha, Chidambaram is a former Union Finance Minister and former Union Home Minister. It is apparently the first time that a former high profile minister who has held these portfolios has been arrested.