Ordinary Indians rush into stocks, spurring a rally as well as risks 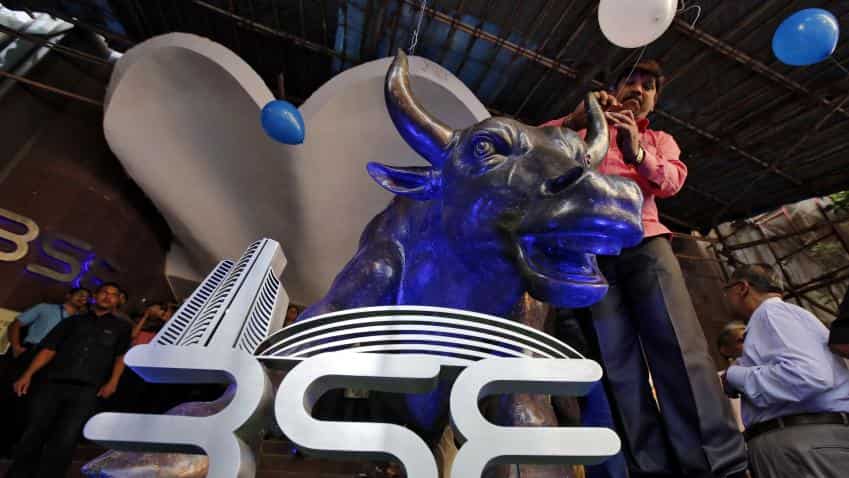 FILE PHOTO: A man ties a balloon to the horns of a bull statue at the entrance of the BSE while celebrating the Sensex index rising to over 30,000, in Mumbai. Pic: Reuters
Written By: Reuters
RELATED NEWS

With red-and-white headphones draped around her neck, 22-year-old Indian IT security consultant Abdhija Sharma looks like she would be more at home discussing the latest music or Bollywood movies than compound returns on equity investments.

But at an office in a Mumbai suburb one recent Saturday, surrounded by banners urging them to "Create Wealth", she and 60 others listened intently as finance professional Alpa Shah explained terms like "the power of compounding."

Tens of thousands of Indians like Sharma are attending presentations promoting mutual funds, such as this one organised jointly by Suresh Rathi and Birla Sun Life, and investing in stocks for the first time, many through monthly plans.

Their investments have helped send indexes to record highs; the NSE index is the best performer in Asia this year with gains of around 14 percent.

The rally is partly the result of a drive by Prime Minister Narendra Modi`s government to wean people off property and gold and channel savings into stocks through mutual funds.

The gains have led to soaring valuations, in particular in the telecoms sector, which some analysts believe are unsustainable and could lead to volatile price swings.

That stock has more than doubled since listing in March, and, to the concern of some brokers, become the second most expensive food retailer in the world, according to Thomson Reuters data.

But Sharma, who plans to invest 5,000 rupees ($78) a month, believes stocks will beat property and gold in the long run.

"There are risks in everything," she said. "Fund managers won`t let millions of people lose money. They will protect our money."

Since May 2014, when Modi came to power, Deutsche Bank estimates retail investors ploughed a record $31 billion into Indian equities through mutual funds, more than the estimated $21 billion overall by foreign investors over the same period.

As a result, assets under management have more than doubled to 17.55 trillion rupees ($274 billion).

Many new investors are buying stocks through monthly plans at mutual funds, or systematic investment plans (SIPs), of as low as 500 rupees per month.

It is part of a push by mutual funds to woo retail investors. Hundreds of presentations are held each month across the country, as well as major marketing campaigns.

The government is keen on the idea, as home prices in big cities have become unaffordable to large segments of the population, while imports of bullion, another favourite among savers, have led to persistent current account deficits.

"The retail investors should ideally come to the stock market via mutual funds and exchange-traded funds," said a senior finance ministry official of the trend.

The Securities and Exchange Board of India (SEBI) has steered investors to mutual funds, strengthening oversight of the sector and warning against Ponzi schemes in TV commercials.

Yet the proportion of equity investments as part of total savings remains in the low single digits, compared with around 10 percent in China or 40 percent in the United States.

As the educator Shah put it: "Skip one Domino`s pizza a month and put that money into a SIP, and over 20-30 years you will get both wealth and health."

Gains of around 12 percent are not seen as unrealistic in a high-growth emerging market like India, but analysts warn such projections mask major risks, including stretched valuations.

The benchmark BSE index is trading at a 12-month forward price-to-earnings ratio of 20.51 compared with a 5-year average of 17.91, Thomson Reuters data show.

Some sectors are especially high. The MSCI India telecoms sector, for example, is trading at a forward P/E of 62.3, nearly triple its five-year average of 22.2.

Some analysts justify high valuations given earnings largely performed poorly since mid-2014, leaving plenty of upside. But others warn the gains were being driven not by fundamentals, but by fund managers buying stocks for retail investors.

Valuations are seen as especially stretched among mid- and small-caps in sectors such as health care and consumer goods.

Avenue Supermarts attracted strong domestic investment and is now trading at a P/E of 58.3, making it the second most expensive food retailer in the world by that measure, according to Thomson Reuters data.

Indian markets have been traditionally volatile; since 1980, the BSE has gained or fallen by double digits in 29 of the last 38 years.

That raises the question of how retail investors would react if products they have been primed to believe were mostly safe suddenly lurched lower, or if property prices started to recover after under-performing in recent months.

India experienced a retail boom in the previous decade, but the 2008 global financial crisis wiped out many investors, leading to a mass exit from stocks that only started to reverse in 2014.

Vishal Modi, a 42-year-old businessman, is old enough to remember the market downturns, so at first he was sceptical. But now he believes SIPs are a safe bet.

"It`s so transparent that actually a fund house has to make a very big mistake to actually lose money."