On this key issue, Rakesh Jhunjhunwala takes on Warren Buffett

Rakesh Jhunjhunwala recently remarked he would not be where he is had it not been for leverage, while Warren Buffett believes price randomness in the short-term can obscure long-term growth in value, and can also unsettle investors' mind, the precise reason why one should avoid going into debt to buy stocks. 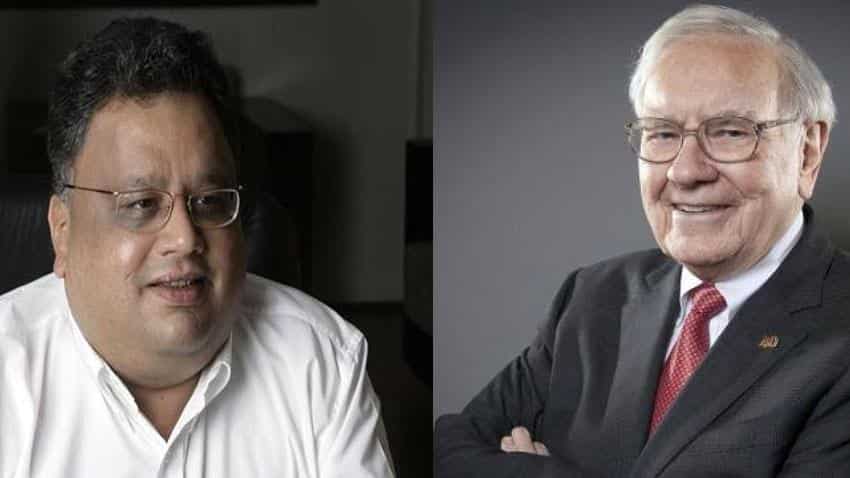 Rakesh Jhunjhunwala vs Warren Buffett: Famed investor Warren Buffett feels strongly about not investing in stock market on borrowed money. The Oracle of Omaha, as he is popularly known, suggested the same in his latest annual letter too. On the other hand, Rakesh Jhunjhunwala, often called Warren Buffett of Indian stock market, recently remarked he would not be where he is had it not been for leverage. Buffett, the chairman and CEO of Berkshire Hathaway believes price randomness in the short-term can obscure long-term growth in value, and can also unsettle investors' mind, the precise reason why one should avoid going into debt to buy stocks.

"This table offers the strongest argument I can muster against ever using borrowed money to own stocks," Buffett said, citing the historical price movement of Berkshire Hathaway's stock in his letter to Berkshire shareholders.

"There is simply no telling how far stocks can fall in a short period. Even if your borrowings are small and your positions aren't immediately threatened by the plunging market, your mind may well become rattled by scary headlines and breathless commentary," he said.

"When major declines occur, however, they offer extraordinary opportunities to those who are not handicapped by debt," Buffett added.

Nevertheless, Buffett is humble enough to acknowledge not taking leverage has indeed hit Berkshire returns over the years.

"Our aversion to leverage has dampened our returns over the years. But Charlie and I sleep well. Both of us believe it is insane to risk what you have and need in order to obtain what you don’t need. We held this view 50 years ago when we each ran an investment partnership, funded by a few friends and relatives who trusted us. We also hold it today after a million or so “partners” have joined us at Berkshire," he further noted in the letter.

Buffett believes the three Ls (liquor, ladies and leverage) can cause even a smart person to go broke.

"Borrowing money is a way of trying to get rich a little faster, but there are plenty of good ways to get rich slowly. And you can have a lot of fun while you're getting rich as well. My partner, Charlie, says that there's only three ways that a smart person can go broke: liquor, ladies and leverage," he said in an interview to CNBC last month.

Meanwhile, Jhunjhunwala happened to comment on Buffett's same remark, but the owner of Rare Enterprises took a divergent view.

"Mr Buffett has never taken a leverage so what does he know about leverage? He might have met a lady, he might have had a drink but he has never had taken leverage! If I started with Rs 5,000, I am not taking leverage I would not be where I am today. But that is a great man’s opinion, and so be it," Jhunjhunwala said in an interview to ET Now last month.

“It’s not a fitting comparison. In terms of wealth and success and maturity, he’s far, far ahead,” told Jhunjhunwala to Reuters once.

“I’m not a clone of anybody. I’m Rakesh Jhunjhunwala,” he booms. “I’ve lived the world on my own terms. I do what I enjoy. I enjoy what I do.”