Om Birla, a surprise pick for the post, won his first Lok Sabha election in 2014 and was again elected this year from Rajasthan's Kota-Bundi seat. 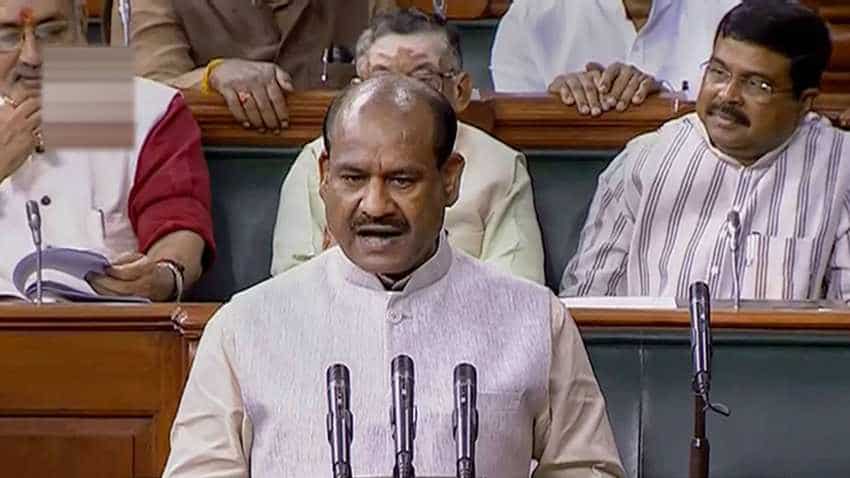 The 56-year-old leader is considered to be close to both Modi and Bharatiya Janata Party (BJP) president Amit Shah. Image source: PTI

BJP MP from Rajasthan Om Birla was unanimously elected the Speaker of the 17th Lok Sabha on Wednesday, succeeding Sumitra Mahajan. Prime Minister Narendra Modi and the opposition assured Birla of their whole-hearted support in the smooth conduct of proceedings in the House. Notably, there was no candidate in the fray other than Birla, and the motion moved by the prime minister to choose Birla as the Speaker was adopted by a voice vote. A total of 13 motions were moved in support of the Kota-Bundi MP Birla.

Since the motion moved by Modi, who is also the Leader of the House, it was adopted and other motions became infructuous. Pro-tem Speaker Virendra Kumar declared Om Birla as elected the Speaker. Modi led the new Speaker to the presiding officer's chair. Several leaders from BJP, Congress, DMK, TMC went up the podium to greet Birla.

Though the Congress and the DMK had moved notices for supporting Birla as the Speaker well past the 12 noon Tuesday deadline, the pro-tem speaker allowed it to be included as a "special case".

Om Birla, a surprise pick for the post, won his first Lok Sabha election in 2014 and was again elected this year from Rajasthan's Kota-Bundi seat. The 56-year-old leader is considered to be close to both Modi and Bharatiya Janata Party (BJP) president Amit Shah. He succeeds eight-term MP Sumitra Mahajan as the speaker, a post traditionally held by senior MPs.

Earlier speaking in Parliament, the Prime Minister said, "It is a matter of great pride for the House. We all congratulate Om Birlaji on being unanimously elected the Speaker of the Lok Sabha. Many MPs know Birlaji well. He has served in Rajasthan as well."

"I personally remember working with Birlaji for a long time. He represents Kota, a place that is a mini India, a land associated with education and learning. He has been in public life for many years. He began as a student leader and has been serving the society since then without a break," PM added.

Congress leader Adhir Ranjan Chaudhary, DMK's T R Baalu and TMC's Sudip Bandyopadhyay were among those who backed Birla and urged him to be impartial as presiding officer of the lower house. Chaudhary, while extending whole-hearted support to Birla, urged him to be impartial and give enough time to the opposition to raise issues of public interest.

He said the presiding officer is the custodian of the House, which according to Jawaharlal Nehru, represents the nation and freedom of the country.