Sakshi last night ended the country's painful wait for a medal at the Olympic Games by clinching the bronze medal in the 58kg category, pulling off a sensational 8-5 victory over her rival in the play-off bout. 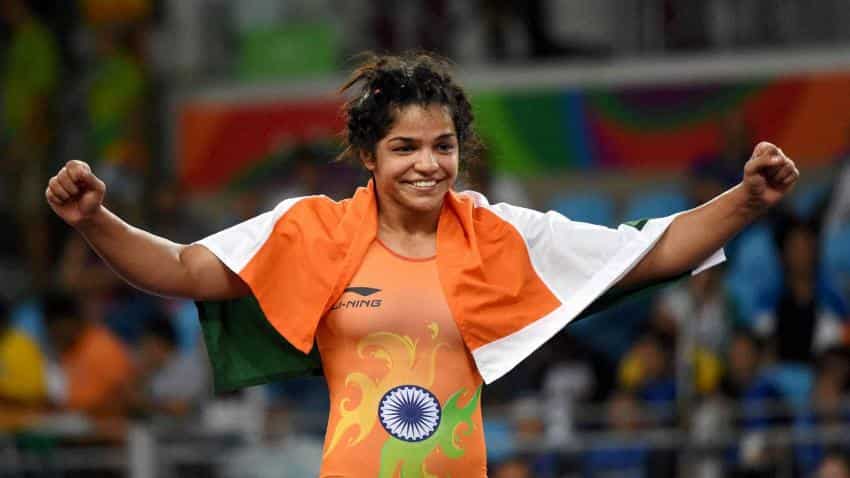 A windfall of cash rewards and incentives, amounting to at least Rs 3.5 crore, fittingly awaits woman wrestler Sakshi Malik who clinched a historic bronze medal for India in the Rio Olympics.

Before the start of the Olympics, Sakshi's state government of Haryana had announced Rs 6 crore for Olympics gold medallist, Rs 4 crore for silver and Rs 2.5 crore for bronze winners.

Sakshi is also entitled to Rs 20 lakh earmarked for an Olympic bronze medallist under the Sports Ministry's Special Awards Scheme.

The Railway Ministry, the employers of Sakshi, will give Rs 60 lakh to her. It had announced handsome cash awards of Rs 1 crore, Rs 75 lakh and Rs 50 lakh to gold, silver and bronze medal winners and a further Rs 10 lakh for qualifying in the Olympics.

For the first time, Indian Olympics Association had also announced that it would award Rs 50 lakh to a gold medal winner, Rs 30 lakh for a silver winner and Rs 20 lakh for a bronze medalist.

In addition, the IOA had said that the coaches would be awarded an equivalent of 50 per cent of the amount that the athletes receive.

Besides this, Bollywood superstar Salman Khan, who is also a goodwill ambassador of the Indian contingent at the Rio Games, has also promised a cheque of Rs 1,01,000 for all the athletes who took part in the Olympics.

Besides this the Indian Railways has also promoted her as a gazetted officer.

According to the announcement made earlier by Railway Minister Suresh Prabhu before the commencement of the Olympics, Sakshi will also be posted in the Zonal Railway of her choice.

"Entire Indian Railways fraternity is feeling proud today, as its employee has brought laurels for the nation," the Railways said in a statement.

Uttar Pradesh Chief Minister Akhilesh Yadav also announced that she will be awarded a bronze statue of Rani Laxmi Bai, a scroll and a cash reward of Rs 3.11 lakh and is given to meritorious sportspersons who excel at national/international level.

Sakshi is also likely to be offered a job by the Haryana state government.

Sakshi last night ended the country's painful wait for a medal at the Olympic Games by clinching the bronze medal in the 58kg category, pulling off a sensational 8-5 victory over her rival in the play-off bout.

The 23-year-old wrestler also became only the fourth woman athlete from India to win an Olympic medal as she earned the dramatic win after falling behind 0-5 in the do-or-die bout on day 12.

Her bronze is the first medal by an Indian woman wrestler and fifth overall for the country in the sport in Olympics.