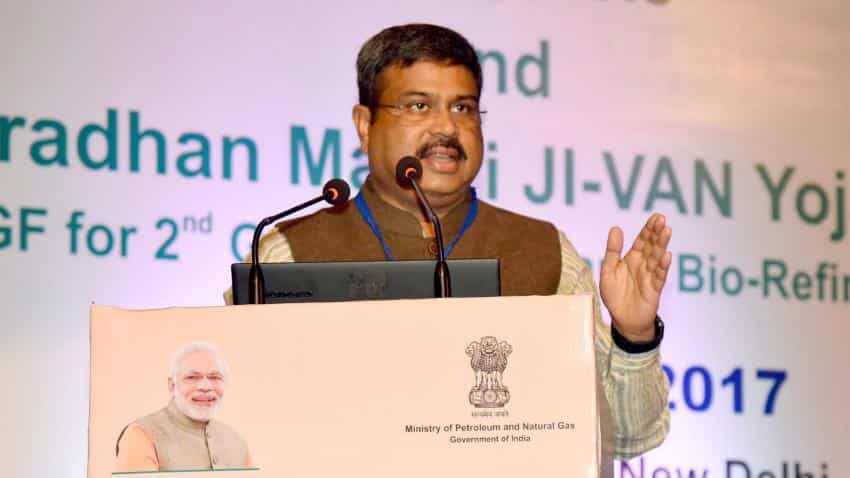 The plan to build the 60 million tonnes (MT) a year capacity refinery in Ratnagiri district of Maharashtra has come in for questioning after Transport Minister Nitin Gadkari announced that only electric cars would be produced in the country after 2030. Besides, Railway Minister Piyush Goyal has said that diesel locomotives will be phased out by 2022.

"India consumes just 6 per cent of the global primary energy at present but it will account for 25 per cent of incremental growth," Pradhan said at a KPMG Energy Summit here.

In order to meet the vast growing energy needs, India needs "multi-source fuels," he said, adding that there is a requirement for conventional fuels, coal, renewable sources as well as nuclear.
India has a capacity to refine 232.066 MT of crude oil into fuel a year, which exceeded the demand of 194.2 MT in 2016-17 fiscal. According to the International Energy Agency (EA), this demand is expected to reach 458 MT by 2040.

Pradhan said India's per capita petrochemical consumption is just 10 kg as against the global average of 30 kg. And the nation is import dependent to meet its petrochemical needs. "So if the petrochemical demand grows with the expanding economy, we would need domestic production," he said.

The planned Rs 2.7 lakh crore project in Ratanagiri district of Maharashtra will have a 10-12 MT petrochemical complex.

Petrochemicals which form the building blocks for products used in the manufacture of wide range of items, from plastics to cosmetics, is derived from refining crude oil or natural gas.

Refineries world over are looking at value addition to produce petrochemicals.

Saudi Aramco has also shown interest in taking an equity stake in the Maharashtra project, which is being jointly put up by Indian Oil Corp, Bharat Petroleum Corp and Hindustan Petroleum Corp.
"Given the market size we have and consumption pattern, we need multiple sources of energy," Pradhan said, adding that the planned refinery is to meet the incremental demand in India for fuel and energy. PTI