NTR: Kathanayakudu is based on the life of the former Andhra CM NTR and highlights the essence of his life. It arrived in the theatres on January 9, 2019 and opened to a positive response at the box office. 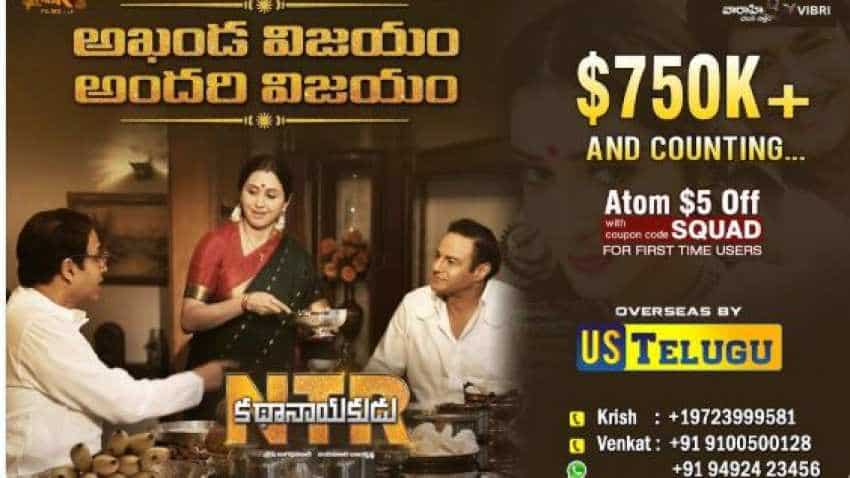 The critics are expecting that the movie is going to more than 50 Cr from the very first weekend of release alone from India. Twitter

NTR Kathanayakudu, directed by Krish Jagarlamudi has Balakrishna, Vidya Balan, Suman and Rana Daggubati in significant roles. The first-part of thr film showcases NTR's struggle in the film industry and his rise to stardom. Balakrishna is one of the biggest and most important stars in the Telugu film industry today. Tollywood 'Legend' enjoys a strong fan following thanks to his charming personality, nature and sincere performances.

According to industry tracker Ramesh Bala, NTR Kathanayakudu is on its way to cross 1 million dollar mark in the US. "#NTRKathanayakudu  collects $750K , heading towards Million Dollar mark in USA," he tweeted.

While the film made Rs 21 crore worldwide on its opening day, it's collections have subsided due to the release of two other Telugu films - Ram Charan's Vinaya Vidheya Rama and Venkatesh-Varun Tej's F2: Fun and Frustration. The film has done a good business in the US. According to the makers of NTR, Kathanayakudu, has collected $794,117 at the US box office in four days, which is over Rs 5 crore so far.

Also, critics are expecting that the movie is going to more than 50 Cr from the very first weekend of release alone from India.

The subject matter of the film. N.T.R: Kathanayakudu narrates the life and times of the NTR - from his acting career to his political career that included three terms as the Chief Minister of Andhra Pradesh. The generations succeeding his, who have only heard about NTR's life would be excited to watch N.T.R: Kathanayakudu.

The cast of N.T.R: Kathanayakudu is special as NTR is portrayed by his son, Nandamuri Balakrishna himself. While Vidya Balan played the role of his wife, as Basavatarakam. The film will have two installments and the second part titled NTR Kathanayakudu will focus on eventful political journey of the legend.