The district administration had on April 21 banned movement between Noida and Delhi except for ambulances, doctors, goods carriers, media, those directly involved in COVID-19 services and those with passes issued by it. 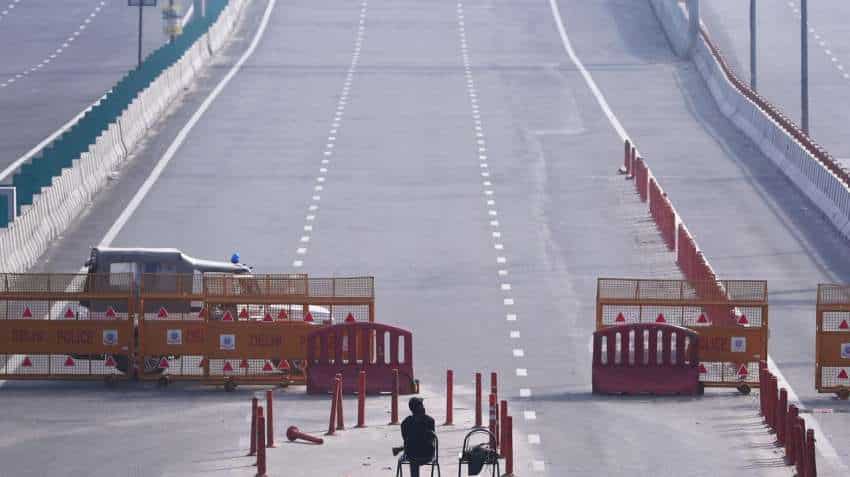 Noida-Delhi border will remain sealed for the movement of people to and from the national capital, the Gautam Buddh Nagar administration said in its latest guidelines for the COVID-19 lockdown issued on Sunday, Photo: Reuters
Written By: PTI
RELATED NEWS

The Noida-Delhi border will remain sealed for the movement of people to and from the national capital, the Gautam Buddh Nagar administration said in its latest guidelines for the COVID-19 lockdown issued on Sunday.

The decision has been taken based on a Health Department report on Sunday which said the source of infection in 42 per cent of the coronavirus cases detected in the district in the last 20 days has been tracked to Delhi, according to the guidelines.

"Therefore, it has been decided in public interest that status quo shall be maintained with respect to inter-state border," stated the guidelines signed by District Magistrate Suhas L Y.

The district administration had on April 21 banned movement between Noida and Delhi except for ambulances, doctors, goods carriers, media, those directly involved in COVID-19 services and those with passes issued by it.

The guidelines also said that activities permitted and prohibited by the Union Home Ministry shall apply to Gautam Buddh Nagar also.

It said 50 per cent of the shops in urban areas will open every day in an alternating manner and the Labour Department has been directed to modify and notify weekly holiday separately after consultation with the stakeholders.

Besides, all industrial activities are allowed outside containment zones but they are mandated to follow all precautionary protocols, it said.

The DM also asked all officials concerned to redefine containment zones as per the new directions.

In a relief for residents of high-rise apartments, the guidelines said in case there is one or multiple cases in a tower in a multi-storey society, only that particular tower where active case/cases have been found will be designated as containment zone.

"However, if cases are found in more than one tower in a society, all such towers where active cases have been found along with common facilities like gym, swimming pool, banquet hall, etc shall form containment zone," it stated.

A containment zone in an urban area covers 250 metres in radius which can include a sector or a residential tower, if there is a single positive case of coronavirus (Category I) and exceeds to 500 metres along with a 250 metre buffer zone if there are multiple cases (category II), according to officials.

However, in rural areas, an entire village will be a containment zone if there is even one case, and if there are multiple cases then the adjoining village will be taken as a buffer zone, they said.

Non-essential movement in or out of a containment zone gets restricted besides increased vigilance and action by the health department for contact tracing and preventing measures against COVID-19, they added.

According to the guidelines, all activities permitted by the Union Home Ministry or the state shall be allowed and no separate pass or permission is required for them.

Earlier on Sunday, the Uttar Pradesh government allowed interstate travel but left it to the district administrations of Ghaziabad and Noida to take a call on the movement of people from adjoining New Delhi.

In the guidelines on the next phase of the coronavirus lockdown, Uttar Pradesh Chief Secretary R K Tiwari said, "There is no ban on interstate and intra-state movement by persons or goods."

The order added that there is no need for a separate approval or an e-permit for this. But at the same time, the order said there will be a ban on the movement of people from the containment areas in Delhi to the NCR areas of Gautam Buddh Nagar and Ghaziabad.

Gautam Buddh Nagar has so far recorded 414 positive cases of corona virus including seven deaths, while Delhi has 19,844 cases including 473 deaths, according to official figures on Sunday.