The trio has been awarded the coveted honour "for their experimental approach to alleviating global poverty" with immense works in the field in poor nations including India, and in Africa and South America. 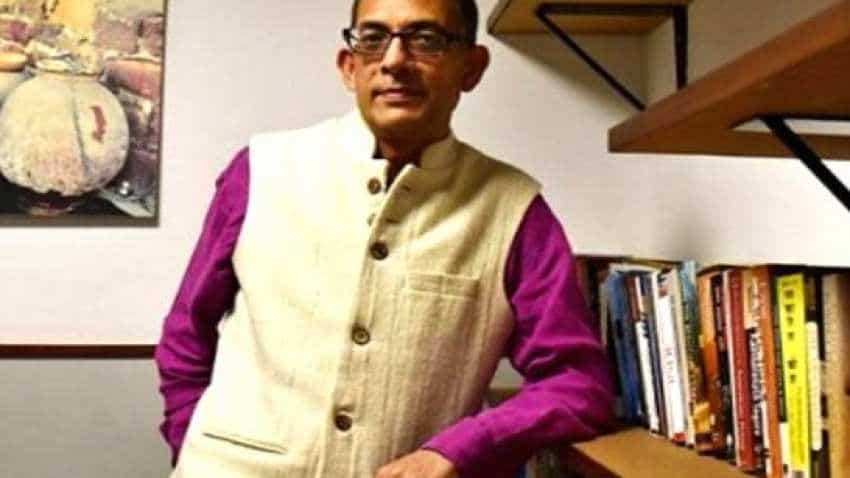 The trio has been awarded the coveted honour "for their experimental approach to alleviating global poverty" with immense works in the field in poor nations including India, and in Africa and South America. IANS
Written By: IANS
RELATED NEWS

As Indians all over the world were thrilled as renowned Indian-American economist Abhijit Banerjee was on Monday named, along with his French wife Esther Duflo and fellow US professor Michael Kremer, the recipient of the 2019 Nobel Prize in Economics - it emerged that he has a strong Maharashtra connection.

The trio has been awarded the coveted honour "for their experimental approach to alleviating global poverty" with immense works in the field in poor nations including India, and in Africa and South America. Banerjee, 58, was born in Mumbai to Maharashtrian mother Nirmala and father Vinayak Banerjee in 1961.

He did his graduation (BA) from the renowned Presidency College in Kolkata, and went to complete his MA from the prestigious Jawaharlal Nehru University, New Delhi. Then, it was to Harvard University for his doctorate on "Essays in Information Economics", and he is currently the Ford Foundation International Professor of Economics at the Massachusetts Institute of Technology (MIT).

"It was Banerjee who applied Randomised Control Trial (RCT) in the field of development and they did their first study for us in Mumbai for civic school students and in Vadodara (Gujarat) on how to improve the children`s reading and arithmetic," Chavan told IANS.

Over the past nearly two decades, similar educational and community-based RCT programmes for PEF were carried out in different parts of India including Jaunpur, Sitapur, and Unnao in Uttar Pradesh, Mahendragarh in Haryana, and in Bihar as a joint initiative with the state government.

"Till now, they are our very active partners and advise us on what work work can be taken up to improve children`s educational skills. They evaluate our programmes, around a dozen-plus so far, to validate whether these are effective or not," Chavan said.

Then, they would highlight the shortcomings/weaknesses in the programmes to enable PEF improvise on them for maximum impact on the students and the community, he added.

The Nobel citation said: "The Laureates` research findings - and those of the researchers following in their footsteps - have dramatically improved our ability to fight poverty in practice. As a direct result of one of their studies, more than five million Indian children have benefitted from effective programmes of remedial tutoring in schools. Another example is the heavy subsidies for preventive healthcare that have been introduced in many countries."

PEF CEO Rukmini Banerji said that the studies, on its programmes for different age groups, ranging from pre-school to vocation training, were published in various international publications.

"These include the book, `Poor Economics` (2011) co-authored by the couple Banerjee-Duflo, in which a chapter `Top Of The Class` is dedicated mainly to the PEF. Naturally, it got us a lot of global fame and respect," Banerji told IANS.

Both Chavan and Banerji describe Banerjee as "deeply committed to development all over the world, including India".

Duflo-Banerjee have published dozens of research papers together or with other co-authors and also jointly penned the upcoming "Good Economics for Hard Times" (2019).

Latest is a book titled "What the Economy Needs Now" (2019), co-edited with Gita Gopinath, Raghuram Rajan, and Mihir S. Sharma.

Additionally, Banerjee has also co-directed documentary films - 2019 release "The Magnificent Journey: Times and Tales of Democracy (co-director Ranu Ghosh), and earlier in 2006, "The Name Of The Disease" (co-directors Arundhati Tuli-Banerjee, Bappa Sen, Konkona Sen-Sharma and Sumit Ghosh) as per his official bio-data.

On a more personal note, Chavan and Banerji describe him as an extremely jovial, outgoing person who immensely loves Indian and Bengali cuisine.

"In fact, he is an excellent cook himself, a good host and enjoys inviting people to feast with him," Chavan said with a smile.

"He also is an aficionado of Indian classical music and can listen to it for hours. He even taught me how to buy fish in a New Delhi market a couple of years ago," said Banerji.