Nobel laureate Abhijit Banerjee has warned that the Indian economy is going into "a tailspin" and his prescription is for the government to focus to increasing demand rather than on deficits or stability. 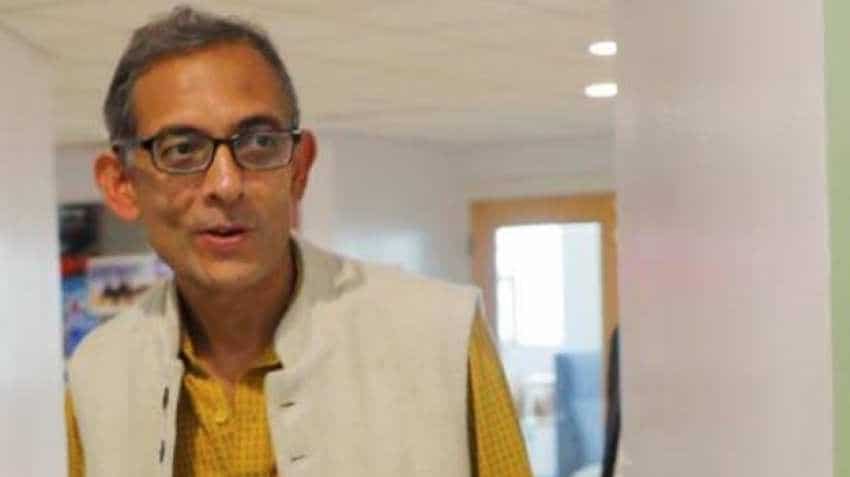 The fall in consumption was a warning sign for India, Abhijit Banerjee said while answering a question about the state of the Indian economy. Photo: Reuters
Written By: IANS
RELATED NEWS

The newly-minted economics Nobel laureate Abhijit Banerjee has warned that the Indian economy is going into "a tailspin" and his prescription is for the government to focus to increasing demand rather than on deficits or stability. When "the economy going into a tailspin is the time when you don`t worry so much about monetary stability and you worry a little more about demand, the demand is a huge problem right now in the economy," he said at a news conference at the Massachusetts Institute of Technology (MIT) in Cambridge on Monday after his prize was announced.

The fall in consumption was a warning sign for India, he said while answering a question about the state of the Indian economy partly in Bengali, which he translated into English.

He said, "The economy is doing very badly in my view. One of the numbers that just came out is the National Sample Survey which comes out every one and a half years or so and it gives you the average consumption in urban and rural areas in India and the fact that we see in that is that between 2014-15 and 2017-18, that number has slightly gone down. That`s the first time such a thing has happened in many, many, many, many years. So that is a very glaring warning sign."

In this scenario, he said that the government was concentrating on deficits and monetary stability when the focus should be on increasing demand.

"The government has a large deficit, but right now, it is sort of, at least, aiming to please everybody by pretending to hold to some budgetary targets and monetary targets," he said.

He criticised Prime Minister Narendra Modi`s government over the use of data.

"There is enormous fight going on in India about which data is right. and the government has a particular view of all data that is inconvenient to it is wrong," he said.

"Nonetheless, this is something that even the government is recognising that there is a problem," he added.

Banerjee was reflecting the views of many economists who have questioned the reliability of government data, among them former government chief economic adviser Arvind Subramanian, who asserted in a Harvard University paper that India`s growth rate may have been overstated by 2.5 per cent for each of the years between 2011-12 and 2016-17.

Banerjee was one of the advisers to the Congress Party in this years elections in moulding the Nyuntam Aay Yojana (NYAY) programme it proposed to give a minimum guaranteed income to 20 per cent poorest people or 50 million families in India.

Banerjee is the Ford Foundation International Professor of Economics at MIT and his wifeco-recipient of the Nobel Prize for Economics, Esther Duflo and is the Poverty Alleviation and Development Economics Professor there.

They shared the prize with Harvard professor Michael Kremer for "their experimental approach to alleviating global poverty," according to the Royal Swedish Academy of Sciences.

Earlier in response to a question about Latin America, Banerjee had said that since they worked on hard evidence and had not studied that area and done the homework he could not give an opinion.

So, Banerjee`s wife teased him amid laughter about answering the question about India saying, "He has an opinion."

He replied, "That is a statement not about what will work in the future but about what is going on now. That I am entitled to have an opinion about."

Asked for his resposne to being the sixth Nobel laureate with a Kolkotta connection, starting with Rabindranath Tagore in 1913, he said, "I assume they are all much more distinguished than me.

Mumbai-born Banerjee received his BSc from University of Calcutta in 1981, his MA from JNU in 1983 and his PhD from Harvard in 1988.

The first person of Indian-Origin to win the Nobel Prize of Economics is Amartya Sen and Banerjee follows in his footsteps by researching poverty-related topics like him.

Banerjee is at least the tenth person of Indian origin or citizenship to win a Nobel prize.

Sepaking about their research in India, Duflo said that they wanted to find out why parents did not vaccinate their children and what would motivate them.

They picked an area in Rajasthan and randomly selected 120 villages for three types of programmes, one where no nothing new was done for vaccination, another where regular vaccination camps were held and a third where there was distribution of lentils before vaccination and plates afterwards to parents, she said.

It gave an insight into how people made decisions and how programme can be made to work and the impact can be made for thousands of programmes.