No surprise? Repo rate to be kept at 6%? What experts believe RBI may do

Majority of experts are believing that RBI will cut down policy repo rate by another 25 basis points in April monetary policy, as inflation indicator stays well within their target. 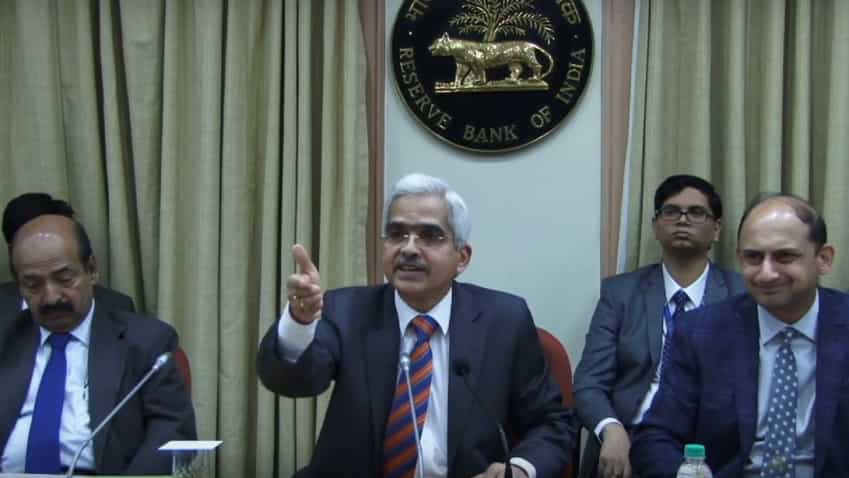 The stage is all set for the Reserve Bank of India (RBI) and its MPC members, as all eyes are looking forward for another cut in policy repo rate. Currently, policy repo rate stands at 6.25%, with reverse repo rate at 6%, while MSF and bank rate at 6.5%. In previous policy, RBI governor Shaktikanta Das and MPC panel also changed the India’s policy stance to neutral from previous calibrated tightening. On Thursday at around 11:45 am, RBI will be presenting India’s first bi-monthly monetary policy for fiscal FY20. One day ahead of the policy, Sensex and Nifty were on negative note. On Wednesday, the Sensex finished at 38,877.12 down by 179.53 points or 0.46%. While Nifty 50 ended at 11,643.95 below 69.25 per piece or 0.59%. Majority of experts are believing that RBI will cut down policy repo rate by another 25 basis points in April monetary policy, as inflation indicator stays well within their target. If this is the case, then India’s policy repo rate will soon stand at 6%.

Kapil Gupta, Prateek Parekh and Padmavati Udecha analysts at Edelweiss Securities said, “ We expect the RBI to cut policy rates by 25bps and see a good chance of the policy stance shifting to accommodative/dovish (neutral currently). Since the previous monetary policy meeting, domestic growth momentum has slowed (reflected in high frequency data such as car sales, IIP, etc.) and inflation has remained benign. Further, global growth momentum has also lost substantial momentum and all major global central banks, including the US Fed, have turned decisively dovish in recent months. Thus, a rate cut by the RBI is highly likely."

CPI or retail inflation for the month of February 2019, came in at 2.57% higher from 1.97% posted in January 2019, but lower compared to 4.44% in the same month of previous year. Such raise in inflation numbers can be attributed to food inflation which has posted different picture

Pranjul Bhandari, Chief Economists at HSBC said, “India, an economy infamous for high and persistent inflation, is currently coming to terms with the opposite phenomenon – inflation over the past year has not just fallen, but fallen more than expected. Inflation forecast errors have become one-sided. Moreover, inflation components continue to confound, with persistent divergence between food and core prices. In the latest reading, food inflation is at -0.1 percent and core inflation 6.1 per cent, with a mysterious 6 percentage point gap between them. Headline inflation at 2.6 percent is well under the 4 percent target.”

Thereby, Bhandari said, “We expect a 25bp RBI rate cut in April, followed by another 25bp rate cut in June.”

Meanwhile, Karthik Srinivasan, Group Head - Financial Sector Ratings  at ICRA Ltd said, “We expect a 25 bps rate cut in the upcoming meeting of monetary policy committee are the inflation remains below the 4% levels and MPC continues to have benign inflation outlook. However unlike the unanimous vote on the last cut in repo rate during February 2019, the rate cut is expected to be divided. Some MPC members may vote for status quo given the various populist announcements being made in run-up to the general elections and more clarity on the outcome of monsoons, which will decide the future course of inflation.”

On market reaction, Sameer Narang and Aditi Gupta analysts at Bank of Baroda said, “Fears of global economic downturn exacerbated this week as US macro data remained soft. As a result, global yields edged lower. However, progress in US-China trade talks drove equity markets higher. Crude prices rose by 2% in the week boosted by OPEC led production cuts. Domestically, with the government announcing higher market borrowings in FY20, yields are expected to inch up. An anticipated rate cut by RBI in its policy meet in the week will work on the opposite side.”

Hence, there is most likely no surprise from RBI’s front if they decide to cut policy repo rate by another 25 basis points.