No consensus at GST Council, next meet on December 11 & 12 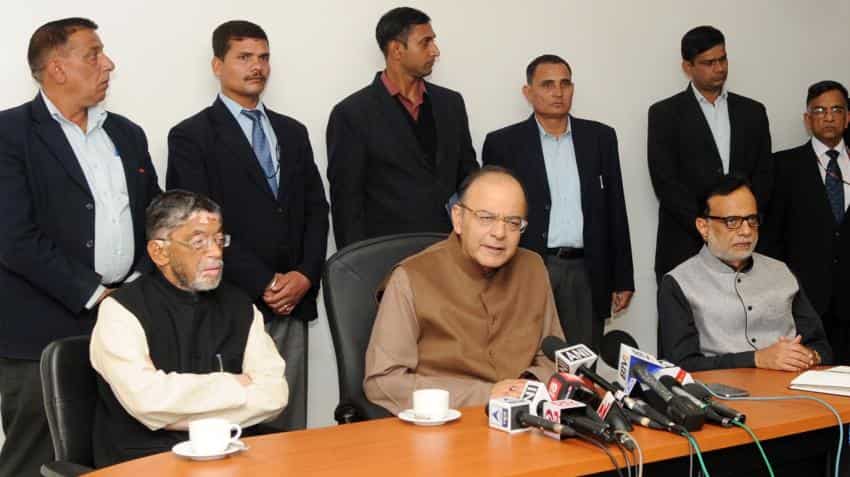 Union Minister for Finance and Corporate Affairs Arun Jaitley briefing the media after the conclusion of the fifth meeting of the GST Council in New Delhi on December 3, 2016. Image Source: IANS/PIB
Written By: PTI
RELATED NEWS

For the third time in one month, the GST Council on Saturday failed to break deadlock over control of assessees under the new indirect tax regime, an issue that has been holding up supporting bills essential for the goods and services tax (GST) rollout from April 1 next year.

The Council, headed by Finance Minister Arun Jaitley, will meet again on December 11 and 12 to hammer out the differences on which assessees will be controlled by states and who would be governed by centre, as also approving the draft supporting legislation Centre GST (CGST) and State GST (SGST).

Besides, the Council will also have to approve a law detailing compensation to states for loss of revenue in the first five years of the rollout and Integrated GST (IGST).

"Are we close to a resolution? I'll keep my fingers crossed," said Jaitley when asked whether the Council would be able to reach a consensus on key issues to enable the country to migrate to the new tax regime from April 1.

"I hope during the next meeting on December 11-12, there is a positive movement as far as laws are concerned. But on the critical issue of cross empowerment, two-three suggestions have come," he added.

The minister, however, added the new regime will have to be put into place latest by September 16, 2017, as it is a constitutional requirement.

"We started approving the laws clause by clause and almost 9 chapters of each have been discussed. We are heading towards consensus on these laws. There are two other laws - Compensation and IGST which will be discussed in the next meeting on December 11 and 12. The issue of dual control linked IGST remains unresolved we will discuss this as well in the next meeting," the minister added.

Talking to reporters after the meeting, Kerala Finance Minister Thomas Isaac said, "There is no consensus... We were not able to arrive at a consensus regarding the cross empowerment model. Therefore, the GST laws could not be completed".

West Bengal Finance Minister Amit Mitra said, "We are sticking to our position that you cannot have duel control, it has to be single control of states below Rs 1.5 crore in the benefit of the poor. We will not bend it".

The second issue, he said, relates to laws that will be formulated.

"On that there was feeling that whatever is put on table will be accepted by the states. Fact is across the political parties have come prepared to discuss and debate the matter ... That has not been completed," Mitra said.

Elaborating on the Council's deliberations, Jaitley said there are three proposals.

"One is you do horizontal division, second is vertical division, third is you work out a hybrid model. The underlying meaning behind that cross empowerment takes place but the existing two bureaucracies are separate. We still haven't reached a stage where we are converging to a federal bureaucracy which will manage the GST," the Union minister said.

"So these two separate bureaucracies that we have is also a human resource in taxation matters so how do we optimally use this human resource. I would like all issues to be resolved," he said.

Jaitley said that there cannot be implementation without resolving all issues.

"My approach will be to resolve it by discussion or consensus. So far I have avoided division and I would like to avoid division to the extent it is possible," Jaitley said.

Delhi Deputy Chief Minister Manish Sisodia also expressed concern on dual control saying the issue was not getting due attention from the Centre.

Later in a tweet he said: "Tax collection can be 50% low this month as there is no business in Delhi markets. If so, it would be hard to pay salaries of government employees".

Tax collection can be 50% low this month as there is no business in Delhi markets. If so, it would b hard to pay salaries of govt employees.