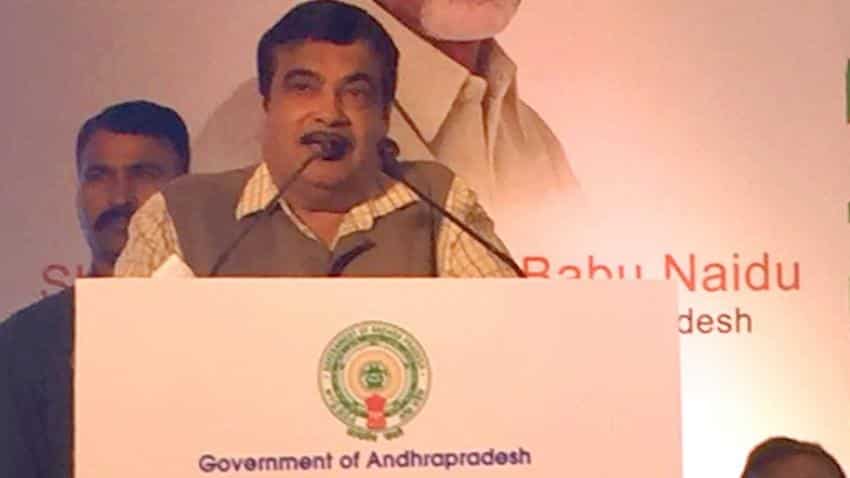 The government is also looking at a hybrid model to develop inland waterway projects on a PPP model. Photo: IANS
Written By: PTI
RELATED NEWS

To raise a part of large pool of resources needed to fund the ambitious inland waterways plan, Union Shipping Minister Nitin Gadkari on Monday said all major ports have been asked to start subsidiaries which will leverage dollar-denominated billing to raise low-cost money.

His Ministry has also written to the Finance Ministry to allocate 5% of the corpus coming from the cess on petrol and diesel for inland waterways, he said.

"My Ministry's total budget is Rs 1,800 crore and it is not possible to undertake the inland waterways projects within that," Gadkari told reporters on the sidelines of the annual Indo-American Chamber of Commerce meeting here.

Starting with the largest container port JNPT, the Ministry has asked major ports to start subsidiaries for the purpose, he said.

JNPT will be developing waterways in seven to eight rivers in Maharashtra, Madhya Pradesh and Goa by raising cheaper forex credit against its annual foreign currency billing of over Rs 4,000 crore, Gadkari said.

Nearly Rs 50,000 crore in low-cost borrowings can be raised by JNPT alone through the receivables, he said, adding the Ministry has decided to ask other ports to start similar subsidiaries.

With resource mobilisation being a key worry, the Shipping Ministry has also asked the Finance Ministry to part with 5% of the overall petrol-diesel cess for inland waterways, Gadkari said.

At present, the cess is being utilised for railway and road development (both at Centre and state levels), he said, and stressed it should also be used for inland waterways being developed under the Jal Marg Vikas plan funded by the World Bank.

The country has a vast network of rivers and canals stretching over 14,500 km.

The Centre has been collecting Rs 2 each on a litre of petrol and diesel since 2000 to part fund national highways and the money is parked with Central Road Fund, which was set up through a Central legislation. The Rs 2 per litre cess on petrol and diesel contributes about Rs 8,000 crore a year.

The Government has already approved developing 106 new inland water projects spread across 24 states as national waterways in addition to the five existing networks after the National Waterways Bill 2015 was approved by the Lok Sabha during last the winter session.

Currently, cargo movement along the five existing national waterways totalling 4,434 km is not even 3 million tonne a year, or a paltry 3% of all cargo movement in the country.

The government is also looking at a hybrid model to develop inland waterway projects on a PPP model, wherein private parties will undertake development and will be allowed to charge a user fee, Gadkari said on Monday.

Shipping Corporation Chairman and Managing Director B B Sinha said his company has already started a wholly-owned subsidiary to focus on inland waterways on the East Coast.

The new company, to be headquartered in Kolkata, will be given a loan of around Rs 1 crore to buy or hire vessels to operate in the Kolkata-Varanasi/Kolkata-Guwahati routes, the minister said.

Asked about his wishlist from new RBI Governor Urjit Patel, Gadkari said there is a need to reduce borrowing cost by at least 2 percentage points as the current cost of up to 12% for infra loans makes a project unviable.

Gadkari said he is meeting Finance Minister Arun Jaitley on August 26 to present a 'car scrapping policy' as part of the port-led development initiatives.

The policy is aimed at taking advantage of the mandate to switch to Euro VI emission norms by April 2020, which will result in large scale scrapping of vehicles, he said.

The minister claimed the auto industry's revenue can zoom to Rs 20 trillion from the present Rs 4.5 trillion as a result of such a policy implementation.

Gadkari said the government is very sensitive about the shipping sector which is passing through difficult times, and added the Centre is finalising orders of up to Rs 50,000 crore to be given to 27 ailing shipbuilding yards.

The Ministry will also be introducing a Bill in the next session of Parliament to abolish the Tariff Authority for Major Ports (Tamp), Gadkari said.

He said the Government has already formed a company to handle works of over Rs 12 trillion under the ambitious Sagarmala project, aimed at modernising ports.