Telecom regulator Trai has said nine crore out of 17 crore TV homes have made their channel preferences to onboard the new tariff regime, and it is constantly monitoring the situation to ensure that consumers do not face inconvenience. 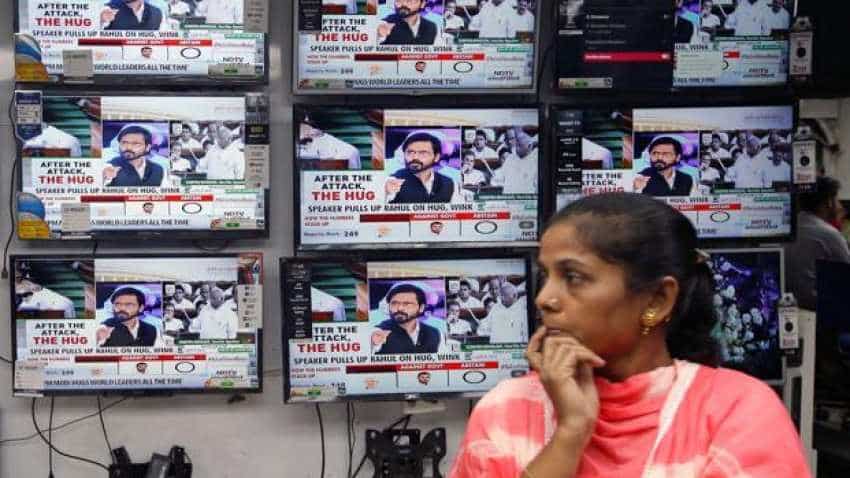 Since DTH is a pre-paid model, as and when customers' long and short duration packs come to an end, people will make channel selection, said Trai Chairman R S Sharma. Image source: Reuters

Telecom regulator Trai has said nine crore out of 17 crore TV homes have made their channel preferences to onboard the new tariff regime, and it is constantly monitoring the situation to ensure that consumers do not face inconvenience. "The speed (of onboarding) has increased as per our data and we expect the rest of the people to also register their choice of channels soon," Telecom Regulatory Authority of India (Trai) Chairman R S Sharma told PTI.

Sharma, who is spearheading Trai's new tariff and regulatory framework for broadcasting and cable services, said of the nine crore TV homes that have made their channel preferences clear, 6.5 crore are cable TV homes and 2.5 crore are DTH homes. "Out of the total 17 crore TV homes (which includes 7 crore DTH homes and 10 crore cable TV homes), about nine crore homes have already registered their choice with the operators, which is a big number," he said.

Since DTH is a pre-paid model, as and when customers' long and short duration packs come to an end, people will make channel selection, he added. "We are guiding and helping the operators where ever required and are calling regular meetings to clarify matters," Sharma noted.  The regulator also plans to step up efforts on customer outreach and awareness programmes. "Trai will take up a massive campaign on consumer awareness, through social media, print, advertisements, jingles and other programs," he said.

Last week, the sector regulator had asked platform operators to revert on special schemes and plans for households with multiple TV connections. TRAI had made it clear that players have to allow individual set top boxes (even within a same household) to have separate choice of channels, if the consumer wishes.

As per the regulations, players can also choose to offer discounts, even waive off the network capacity fee (a maximum of Rs 130) on the subsequent connections in the same household. But such discounts have be offered uniformly in a location and declared transparently on the players' website. Sharma said that Trai has received responses from three operators on the special schemes for multi-connection homes, but at this point, does not feel the need to intervene into the matter. He did not divulge further details.

The regulator has unveiled the new tariff order and regulatory regime for the broadcast and cable sector, which paves the way for consumers to opt for channels they wish to view, and pay only for them. It has said every channel should be offered a la carte, with a transparent display of rates on electronic programme guide. The new framework has come into effect from February 1.

A recent Crisil report had claimed that costs of TV viewing may rise by 25 per cent under the new regulatory regime, but Trai had strongly refuted the claim citing specific data from two market players to argue that prices in specific locations like Delhi and Mumbai have come down.