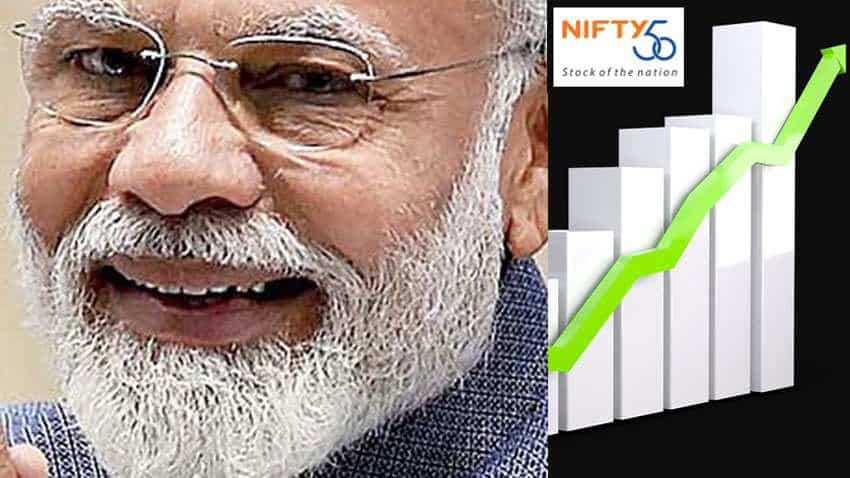 By mid-2019 rupee may touch the level of 65-66/dollar that would further fuel the investor's sentiments towards the positive bias into the markets, say experts. Photo: PTI
Written By: Asit Manohar
RELATED NEWS

Nifty and Sensex touched new highs and closed at an all-time high on Tuesday, April 16, 2019, as global markets remained supportive. Nifty closed 96 points higher at 11,787. Volumes were about 20 per cent higher than the recent average. Banks and Auto, the traditional high beta sectors did well as did Oil & Gas, Telecom, Capital Goods and Consumer durables. the market experts are of the opinion that Nifty is 'overall bullish' and its immediate target is 12,000. However, they now not sigh of predicting the 50-stock index Nifty touching the 13,000 levels by mid-2019. They are of the opinion that oil prices have not gone beyond $71/barrel levels, which is a piece of good news for the Indian indices, especially Nifty. They say if the crude oil prices remain at these levels and Lok Sabha election results, the rupee-dollar deviation would be the major key factors that would further fuel the bull run at Nifty.

VK Sharma, Head PCG & Capital Markets Strategy at HDFC Securities said, "For now investors were on the familiar ground as the Nifty was merely recouping lost ground. From here on they will have to take a leap of faith and climb walls of worry. We have a base case target of 12,400 for the Nifty this year and a bull case of 13,700." He said that the RBI may change its stance from neutral to accommodative in view of the global and domestic growth weakness that will help NBFCs and Real Estate to do well.

Standing in sync with HDFC Securities views on the 50-stock Nifty index SEBI registered technical equity analyst Simi Bhaumik said, "Overall the market is bullish and after breaking the previous all-time high of 11,761, its next target is 12,000 in the short-term perspective." She said banking, especially private banks and auto sector stocks will be the main beneficiary of the upcoming bull run on the Dalal Street and major Indian indices including Nifty.

Connecting the Nifty rally with Lok Sabha Elections 2019 and FIIs positive sentiments Prakash Pandey, Head of Research at Fairwealth Securities said, "In March 2019, FIIs have invested record Rs 34,000 crore in the Indian equity markets. This could happen because the rupee gained its lost ground against the US dollar. Apart from this, majority of the Opinion Polls are suggesting Narendra Modi led NDA Government coming back to power post-Lok Sabha Polls 2019." Pandey went on to add that in coming days rupee would further scale against the US dollar as the crude oil has recently corrected to the tune of near 8-9 per cent.

"By mid-2019 rupee may touch the level of 65-66/dollar that would further fuel the investor's sentiments towards the positive bias into the markets. In such a scenario 800-1000 points rally at the Nifty index won't be surprising because both domestic and global indicators are giving positive signals for the Indian markets," said Prakash Pandey of Fairwealth Securities.