The design of the coins is prepared by the National Institute of Design while Security Printing and Minting Corporation of India Limited and the Ministry of Finance played the key role in the introduction of new coins in the country. 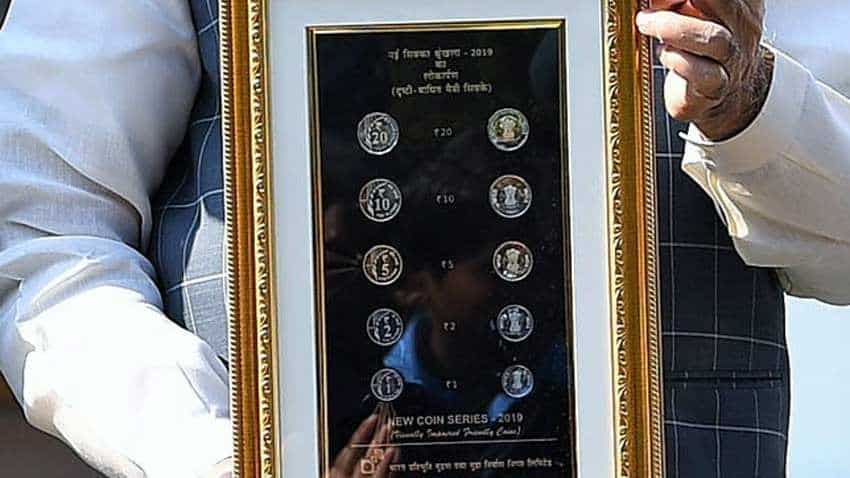 The ministry claims that these coins will have enhanced design and are visually impaired friendly, Photo:PIB
Written By: ZeeBiz WebTeam
RELATED NEWS

Finance ministry had issued a notification on March 6 announcing the launch of 5 new coins in the country namely new One Rupee, Two Rupees, Five Rupees, Ten Rupees and Twenty Rupees. The new series of coins are visually impaired friendly and have enhanced design. The coins were launched by PM Narendra Modi and Finance Minister Arun Jaitley. The design of the coins is prepared by the National Institute of Design while Security Printing and Minting Corporation of India Limited and the Ministry of Finance played the key role in the introduction of new coins in the country.

Various new features have been incorporated in the new series of circulation coins to make them more easy for the visually impaired people to use. The coins are characterized by the increasing size and weight from lower to higher denominations from Re 1 to Rs 20 coin. All of the denominations would be of the round shape, except the newly included coin of Rs 20, which will be a 12 sided coin with no serrations.

The face of the coin will have the Lion Capitol of Ashoka Pillar with the legend 'Satyamev Jayate' in Hindi inscribed below, flanked on the left periphery with the word 'Bharat' in Hindi and on the right with the word “INDIA” in English same are Rs 5 coin.

The back face of the coin will have a denominational value “2” in the international numerals. The Rupee symbol shall be shown above the denominational value. The coin also has a design of grains depicting the agricultural dominance of the country is flanked on the left periphery of the coin. The top right and bottom right peripheries shall bear the word 'Do rupaye' in Hindi and “TWO RUPEES” in English. The year of minting in international numerals shall be shown at the centre of the left periphery of the coin.

Talking about the shape and outside diameter, then the new Rs 2 coin is 23 mili-meter circular. It has 50 wider serrations on the edge and has a metal composition of Ferritic stainless steel containing Iron of 83%, Chromium of 17%

Whereas the Old 2 Rs coin which was introduced in the year 1992 is minted with cupro-nickel metal and has the diameter of 26mm and the weight of 6 grams. Comparing Rs 2 coin with Rs 5 coin then the design of the coins are almost same with different numerical values, the difference was spotted in the weight, diameter and the metal composition of both the coins.