New Rs 100 currency notes to be out soon: Check features

The Reserve Bank of India (RBI) is all set to release a new set of Rs 100 currency notes signed by Governor Shaktikanta Das. 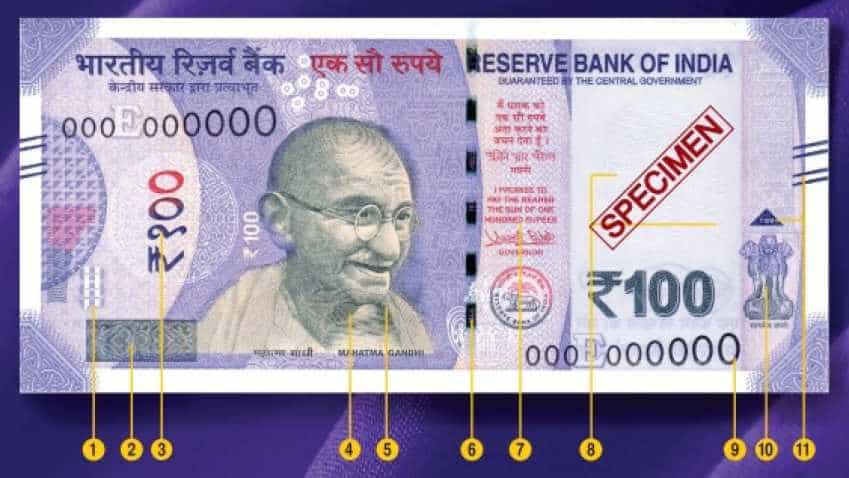 The RBI announcement came months after the central bank said it would release a new set of Rs 20 currency notes.
Written By: ZeeBiz WebTeam
RELATED NEWS

The Reserve Bank of India (RBI) is all set to release a new set of Rs 100 currency notes signed by Governor Shaktikanta Das. In an official statement last month, the RBI had said, "The Reserve Bank of India will shortly issue ₹100 denomination Banknotes in Mahatma Gandhi (New) Series bearing the signature of Shri Shaktikanta Das, Governor. The design of these notes is similar in all respects to ₹ 100 Banknotes in Mahatma Gandhi (New) Series. All Banknotes in the denomination of ₹ 100 issued by the Reserve Bank in the past will continue to be legal tender." Even as the new notes are introduced, all old Rs 100 notes will continue to remain valid. Also, it is clear from the RBI statement that apart from the governor's signature, the new Rs 100 notes will not be any different from the current Mahatma Gandhi (New) Series banknotes in circulation.

The new Rs 100  notes in circulation at present bears the signature of previous Governor Urjit Patel.

The RBI website provides full features of the currency notes in circulation. To ensure whether your currency note is not fake, check for the following features on both sides:

1. See-through register with denominational numeral 100,
2. Latent image with denominational numeral 100,
3. Denominational numeral १०० in Devnagari,
4. Portrait of Mahatma Gandhi at the centre,
5. Micro letters ‘RBI’, ‘भारत’, ‘India’ and ‘100’,
6. Windowed security thread with inscriptions ‘भारत’ and RBI with colour shift; Colour of the thread changes from green to blue when the note is tilted,
7. Guarantee Clause, Governor’s signature with Promise Clause and RBI emblem towards right of Mahatma Gandhi portrait,
8. Ashoka Pillar emblem on the right,
9. Mahatma Gandhi portrait and electrotype (100) watermarks,
10. Number panel with numerals in ascending font on the top left side and bottom right side,
11. For visually impaired intaglio or raised printing of Mahatma Gandhi portrait, Ashoka Pillar emblem, raised triangular identification mark with micro-text 100, four angular bleed lines both on the right and left sides.

12. Year of printing of the note on the left,
13. Swachh Bharat logo with slogan,
14. Language panel,
15. Motif of RANI KI VAV,
16. Denominational numeral १०० in Devnagari.