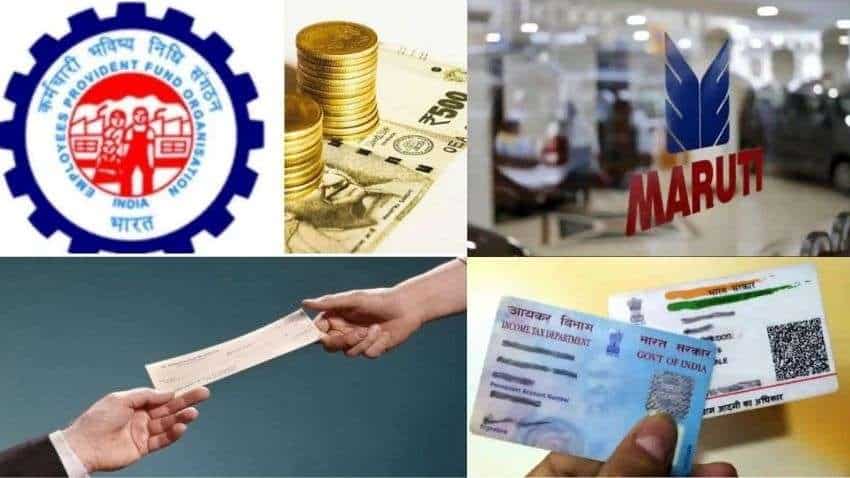 New PF rules: From September 1, if your Universal Account Number (UAN) is not linked with your Aadhaar card, then employers will not be able to credit your Provident Fund (PF) account. It is mandatory for Employees Provident Fund (EPF) account holders to link their Aadhaar number and PF account by August 31, 2021, as the PF rule is going to change from September 1, 2021. If the EPFO members fail to link their Aadhaar with EPF by August 31 then it can lead to discontinuation of the recruiter's contribution in one's PF account. It can be noted that earlier the deadline for linking PF account with Aadhaar was May 30, 2021, which was later extended by the Employees' Provident Fund Organisation (EPFO) to August 31, 2021.

Changes in cheque clearing system: Positive Pay System will be applicable for the transaction of Rs 50,000 or more checks of RBI. Under this, the bank will have to give information about the transaction of Rs 50,000 or more checks through net banking, mobile banking, or by visiting the bank branch. If this is not done, the check may be rejected. As per the new rule, the customers, who are looking to issue cheques, will have to inform their respective banks about the cheque details via net/mobile banking or a physical visit to the branch. If the issuer fails to inform the bank prior to the cheque being issued, then the cheques will get bounced. Similarly, this could prove a hurdle for senior citizens or people who are unfamiliar with online/net banking.

Changes in car insurance: Buying a new car is going to become more expensive from September 1, 2021. After the decision of the Madras High Court of mandating own damage coverage for cars from the month of September, now you may have to pay Rs 10 to Rs 12,000 more as the down payment for a four-wheeler. After the decision of Madras HC, bumper-to-bumper insurance will be mandatory on new vehicles from September 1

Change in the prices of Maruti Suzuki: The price will be hiked on every model of Maruti Suzuki from September 1. For the third time in a year, Maruti Suzuki India (MSIL) today announced a price hike from 1st September 2021 without revealing the details amid the rising input cost. India’s largest carmaker earlier in January and April had also announced a price rise across variants earlier this year. “Over the past year, the cost of company's vehicles continues to be adversely impacted due to increase in various input costs. Hence, it has become imperative to pass on some impact of the additional cost to the customers through a price rise,” Maruti Suzuki in its statement said.

Seeding Aadhaar card with PAN card: The last date to link your Permanent Account Number (PAN) with your Aadhaar number is till September 30, 2021. Previously, the deadline for linking PAN with Aadhaar was June 30, 2021. The decision was taken keeping in the view disruption caused by COVID-19, said the Income Tax Department had mentioned earlier.