The 30-day window to decide whether the account is non-performing removes the compulsion of starting a resolution process even if there was a one-day default, says Sunil Mehta, Chairman, Punjab National Bank (PNB). 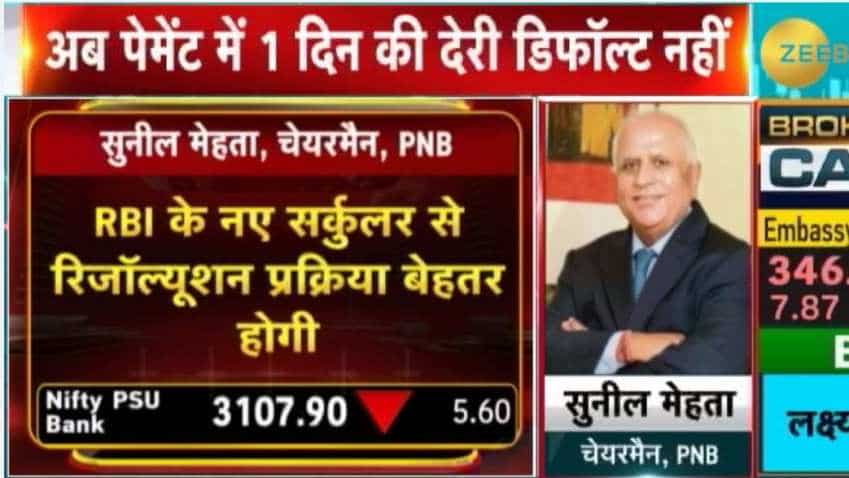 The February 2018 circular that was initiated in the past and the IBC that has been processed now, steps in the right direction.

The 30-day window to decide whether the account is non-performing removes the compulsion of starting a resolution process even if there was a one-day default, says Sunil Mehta, Chairman, Punjab National Bank (PNB). Mehta during an exclusive interview with Anil Singhvi, Managing Editor, Zee Business also said that the February 18 circular was too stringent but the new prudential framework for resolution of stressed assets is more pragmatic in nature. Excerpts:

Q: Do you think that the new resolution is more beneficial for the banks when compared with the February 2018 circular?
A: It is an important circular. The banks, earlier, faced a problem under which it was supposed to consider an account as an NPA (non-performing asset) on day zero/day one of its default. But, now, the RBI has introduced a change to it under which a 30-day window has been provided to decide either the account is a non-performing or not. It takes care of what was happening, earlier, where the bank had a compulsion to put the borrower in that process even if there was any technical default, which was a stringent process. This is far more pragmatic.

Secondly, to streamline the process of resolution, they have now included all the terms of inquisition to the bank in the new framework. It includes term financial institution, small finance banks, systematically important non-deposit NBFCs and deposit-taking NBFCs.

Thirdly, to streamline the process, the RBI circular also mandates the signing of the Inter-Creditor Agreement (ICA) - recommended by the Sashakt committee and signed by 36 banks/financial institutions in 2018 - by all lenders. Albeit, there are some marginal changes in which the total value that is required to enforce the inter-creditor agreement can be decided by lenders with 75 per cent exposure and outstanding facility. Then, whatever the resolution plan agreed by these banks and financial institutions that will become enforceable.

Q: Undoubtedly, the new framework offers some leeway on the provisioning of the stressed accounts that will be resolved under IBC (Insolvency and Bankruptcy Code). But do you think that the need for provisioning will increase for accounts that will not be resolved through IBC?
A: Yes, this incentive and disincentive system are good as the resolution process will be decided by the banks together. What the RBI is attempting to do is to make sure that it is efficiently and quickly done. So, that there is an incentive or disincentive as the case may be if you are able to resolve the case just by sitting together than in that case you will preserve the asset. Otherwise, you must send it to IBC. So, I think that it is important to look at it from the point of view of an incentive-disincentive recommendation for the overall structure, which is probably quite well.

Q: Do you think that these guidelines are balanced in nature because it takes care of the interest of the two, banks as well as the companies, who are not able to pay at the time, or you have some more points that have been missed here?
A: The February 2018 circular that was initiated in the past and the IBC that has been processed now, steps in the right direction. The June 7 circular of 2019 by the Reserve Bank has removed the loopholes that existed in the February 2018 circular. In the process, RBI has considered the recommendations of the industry and the banks and taken them into account and came out with a formulation that is best suited for the current condition. Going forward, if there is any need for changes then the industry, business and banks will sit together to discuss the same. But, going by the current conditions, it seems to be a very balanced framework.