New India to jobs, Niti Aayog has a cracker of year ahead 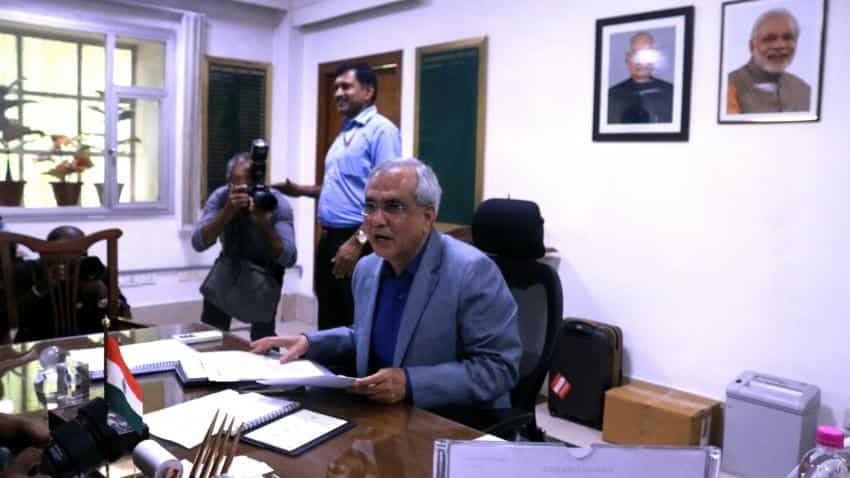 Year 2018 for the Niti Aayog, by all means, is going to be challenging -- after all, it has arguably the toughest job of giving shape to Prime Minister Narendra Modi's call for a New India by 2022 and a sharper focus on agriculture, malnutrition, higher education and jobs.

"In the next calendar year 2018, we (Niti Aayog) will focus even more on agricultural transformation, malnutrition, higher education and employment generation," Kumar told PTI. "We are now trying to work on giving substance to the Prime Minister's call for New India by 2022... So, we will complete that (New India @2022 vision document) soon and once that is over, we will work on the 15-year vision document."

The Niti Aayog is the government's premier think-tank, with the Prime Minister as its chairman.

Kumar said the Aayog will continue to keep the twin tasks of co-operative and competitive federalism on its radar.

"I think we will continue with our twin tasks of co- operative and competitive federalism, and in this regard, I have already visited 11 states and will visit other states next year so that they seriously consider the

Niti Aayog as their outpost at the Centre. And we can together design state specific development plans," the Niti Aayog V-C noted.

About the economy, he observed that private capex investment is on the rise and "we will see more rapid growth and also generation of quality employment".

"And by this time next year, let us say in the next 12 months in the third quarter of 2018-19, I would see the economy at 7.5 per cent and growing upwards. In another two years from now, we would have reached 8 per cent," Kumar asserted.

His bets on a double-digit economic growth during the next five years are based on huge formalisation, ease of doing business and simplification of investment rules.

One of the priorities for the Aayog, he said, will be to push India's export in 2018 as out-bound shipments play a critical role in creating high-quality jobs.

In 2017, Arvind Panagariya left the Niti Aayog as its first V-C and was succeeded by Kumar.

The Indian-American, who had taken charge at the Niti Aayog in January 2015, was the second high-profile academician-economist after former RBI governor Raghuram Rajan to quit a top job in India to return to teaching in the US.

Like Rajan, the 64-year old Panagariya, professor of Indian Political Economy at the Columbia University, was outspoken on issues, including labour reforms, privatisation of Air India and sick PSUs, for which

RSS-affiliate Bharatiya Mazdoor Sangh (BMS) had accused the Niti Aayog of furthering the corporate lobby's agenda. 2017 also turned out to be a year of flip-flops for the premier body.

Its member Bibek Debroy in April created a controversy by making a strong case for bringing agriculture income under the tax net. The Aayog quickly distanced itself from the Debroy's comment, saying it was

Debroy's personal view and there was no proposal in the 3-year action agenda to tax farm income.

Taxing agriculture income is a political hot potato and successive governments have stayed away from experimenting with it.

The findings were at sharp variance with the World Bank report, which showed that it took just 26 days to set up a business in India in 2016.

During 2017, the Niti Aayog also came out with the National Nutrition Strategy, the draft National Medical Commission (NMC) Bill, 2017, and a report titled 'India Leaps Ahead: Transformative Mobility Solution' on electric vehicles.

It also recommended a list of 23 sick CPSEs for privatisation, which is being looked into by the Department of Investment and Public Asset Management (DIPAM).

The Aayog also organised Champions of Change programme for over 200 CEOs and the 8th edition of the Global Entrepreneurship Summit (GES).