Ram Vilas Paswan, Union Minister of Food & Public Distribution, Consumer Affairs, told Anil Singhvi, Managing Editor of Zee Business that he hopes Consumer Protection Bill 2018, which will amend the act of 1986, will be passed during the upcoming monsoon session of Parliament. The e-commerce would be covered under the new Consumer Protection Act and the Act would provide legal support to aggrieved consumers of the online segment, he added. 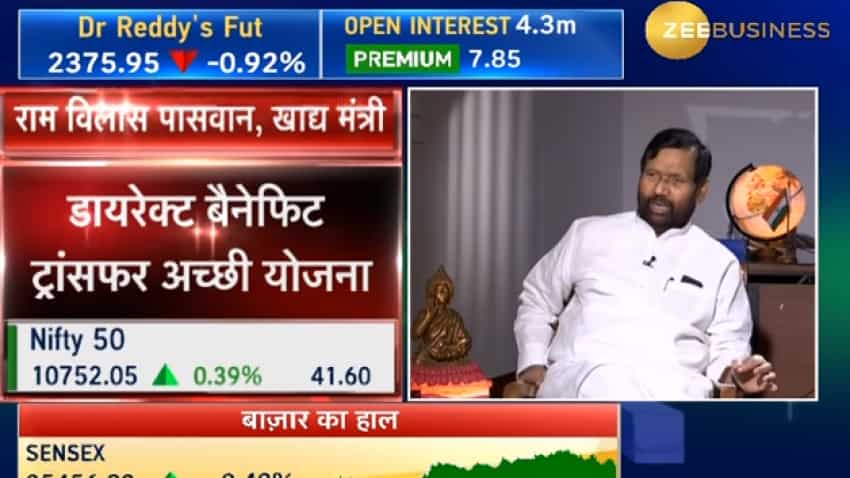 Union Minister Ram Vilas Paswan said that he hopes that the Consumer Protection Bill 2018 will be passed in the upcoming session of Parliament. Image source: Zee Busines
Written By: ZeeBiz WebTeam
RELATED NEWS

Ram Vilas Paswan, Union Minister of Food & Public Distribution, Consumer Affairs, in an exclusive interview with Anil Singhvi, Managing Editor of Zee Business, said that he hopes that the Consumer Protection Bill 2018, which will amend the act of 1986, will be passed during the upcoming monsoon session of Parliament. He further said the e-commerce would be covered under the new Consumer Protection Act, and it would provide legal support to aggrieved consumers of the online segment. Edited Excerpts of the interview:

Q: Your government has completed four years of this term. On this occasion, I would like to know about the biggest achievement of your ministry in these four years?
A: Our ministry is related to poor people of the country and has been providing wheat and rice to nearly 81 crore people at the rates of Rs 2 and Rs 3 per kg respectively. This subsidy, which stands around Rs 1 lakh 40,000 crores, is being borne by the government. Apart from this, we have not raised the rates for these products since past five years and have decided not to increase the same till June 2019.

This law came into existence during the rule of UPA government, but was not implemented in a full-fledged way in the country except few states. We have managed to implement the scheme across the country. In addition, we have also resolved the problems related to public distribution system (PDS) by computerising the complete process. We have also linked 89 per cent of the ration cards available across the country with the Aadhaar numbers of cardholders. This linking of ration cards with Aadhaar has helped us in saving about Rs 17,000 crore till date, which was given back to the state government.

Apart from this, we have also regulated pension system as well as the availability of medical facilities for the employees of departments related to my ministry.

Q: When are you planning to introduce Direct Benefit Transfer (DBT) under public distribution system?
A: See, our government has an aim of going cashless and we feel that the DBT process is an important step introduced by our government. Introducing the same in PDS system will enable us to provide 1.25 more cash over the Minimum Support Prices (MSP) to the farmers from whom the goods will be procured. The DBT process in the PDS system was implemented on a pilot basis at three places namely Pondicherry, Dadra and Nagar Haveli and Chandigarh, but faced certain problems due to absence of a full proof mechanism for implementation of the process. After this, we asked every state to provide a full proof mechanism for implementation of the scheme, but no one turned up with a solution. It means it will take a little longer time.

Q: The second problem is related to MRP, which is mentioned on the products that are being bought. The problem is that shopkeepers don't want to sell the products at the rates printed on the packet, although everyone, the customer and the shopkeeper, are aware that there is a law that says that products should be sold at the stated MRP. Is there any solution to this problem?
A: There is a solution. The first is in form of consumer court, where a consumer can go with his/her complaints. And the second solution is available in form of complaint centres, whose numbers have been increased from 14 to 60. Under the new Act, there are provisions that say that the license of the shop can be seized in cases of fraud.

Q: Earlier, you were talking about high productions. But this high production has given birth to a problem, mainly in case of sugarcane farmers. The betterment of sugarcane production has resulted in the high production of sugar leading to fall in sugar prices in the market. Due to this, sugar companies are working in losses, which means they are not able to pay the dues of farmers. Can you tell the steps taken by the government to end the problems of sugarcane farmers, whose bills are not being paid by sugar mills?
A: There are different solutions like in case of wheat and rice, we have said that we will be buying each and every grain that is being sold by farmers and are increasing the number of godowns for their storage. Right now, we need godowns for storage of over 6 lakh tonnes of food grains that are offered under PDS, but have the capacity to store 8 lakh tonnes. In addition, we are working to increase this storage capacity by 150 lakh tonnes through PG and silos.

We have a separate law to tackle the problems related to sugarcane farmers under which we decide the fair and remunerative price (FRP) for sugarcane, apart from this, the state governments have the right to increase this FRP through state advisory price (SAP). Apart from this, every state government has the power to take an action against sugar mills, who fail to provide dues of farmers within 15 days. Under the action, the state government can make the mill to pay the sum with a penalty and can also seize the property of the company which fails to pay farmers' dues after the first action of the state.