Arunachal Pradesh Chief Minister Pema Khandu on Saturday claimed that foreign investments are eluding the sensitive border state owing to objections raised by a neighbour, a reference to China, and urged the central government to address the issue. 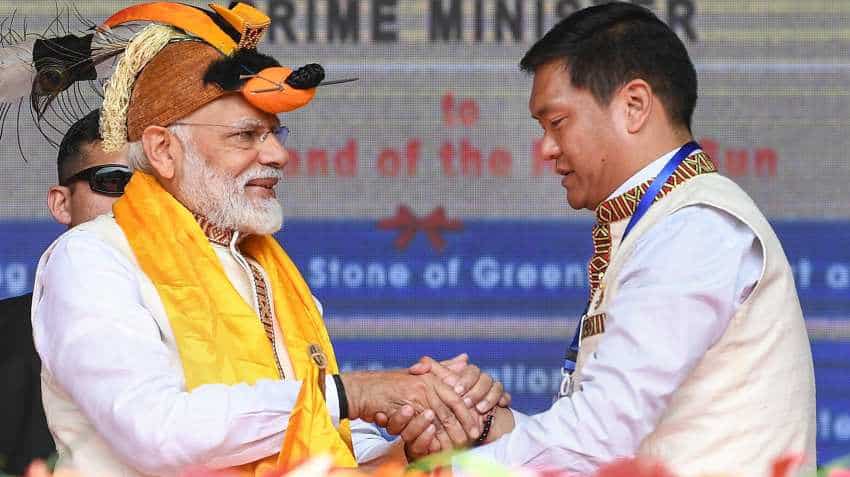 Arunachal Pradesh Chief Minister Pema Khandu on Saturday claimed that foreign investments are eluding the sensitive border state owing to objections raised by a neighbour, a reference to China, and urged the central government to address the issue. Khandu was speaking at a function where Prime Minister Narendra Modi was also present.

"Arunachal Pradesh has a lot of potential but due to objection of the neighbouring country, foreign investment is not coming," Khandu said at the event at Indira Gandhi Park here. Although Khandu did not take China's name, the reference was obvious as Arunachal Pradesh shares a 1,080-km long border with China which has refused to recognise India's claim on the region. New Delhi has consistently maintained that the state is an "integral and inalienable part" of India.

On Saturday too, China opposed the prime minister's visit to Arunachal Pradesh but India dismissed it saying its leaders visit the state like they travel to any other part of the country. "I hope in coming days under your (Modi's) intervention, the issue will be resolved so that we can convert our potential into capital," Khandu added.

Khandu did not cite any specific instance of foreign investment getting blocked, but sources said that the chief minister was hinting at the objection raised by China in June 2009 after a mega Asian Development Bank (ADB) funded irrigation project got scrapped. The ADB board of directors and member countries had endorsed a Country Partnership Strategy (CPS) for 2009-12, which included the irrigation project.

Although the ADB member countries had backed a document which included a flood management project in Arunachal Pradesh, pressure from China "forced" the bank to withdraw the project in 2009. In 2010, India dropped Arunachal Pradesh and Sikkim from a World Bank loan proposal to avoid running into Chinese objections over multilateral financial aid to projects in the border areas, an official told PTI on condition of anonymity.

"The initial proposal for a Rs 11,000 crore loan to strengthen electricity transmission and distribution in the northeastern region covered Arunachal Pradesh, Assam, Manipur, Meghalaya, Mizoram, Nagaland, Tripura and Sikkim. After excluding the two states, the loan amount was around Rs 8,115 crore," the state government official said.

Khandu, however, said that Arunachal Pradesh was getting more attention from the Centre ever since the National Democratic Alliance (NDA) government came to power in 2014. "The region which remained neglected for years together got its due recognition after Modi became the prime minister of the country.

"The seriousness for the region has gained momentum which is evident from the fact that every month at least three ministers visit the states of the region," Khandu said.