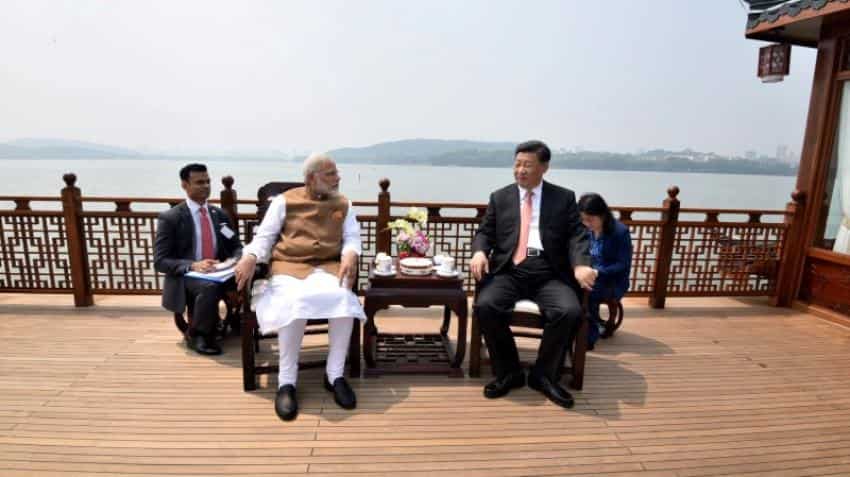 Narendra Modi-Xi Jinping meet: Chinese Vice Foreign Minister Kong Xuanyou said on Saturday China does not think it is important whether India accepts China`s Belt and Road infrastructure project and China won`t force it to. Kong, speaking to reporters in the central Chinese city of Wuhan after an informal summit between the leaders of China and India, also said China does not think the Indian government has changed its official position that Tibet is a part of China. At their meet, Prime Minister Narendra Modi and Chinese President Xi Jinping have decided to issue "strategic guidance" to their militaries to strengthen communications and to build trust and understanding, the top Indian diplomat said today, a move aimed at avoiding a Doklam-like situation in the future.

Modi said his talks with President Xi focussed on diverse areas of India-China cooperation. "We discussed ways to give impetus to our economic ties as well as people-to-people relations. Other areas we spoke about include agriculture, technology, energy and tourism," he said. Briefing reporters at the end of the two-day informal summit between the two leaders in the central Chinese city today, Foreign Secretary Vijay Gokhale said the two leaders underscored the importance of maintaining peace and tranquility in all areas of the India-China border region.

"To this end, they issued strategic guidance to their respective militaries to strengthen communication in order to build trust and mutual understanding and enhance predictability and effectiveness in the management of border affairs," Gokhale said.
He said the two leaders further directed their militaries to earnestly implement various confidence building measures agreed upon between the two sides, including the principle of mutual and equal security, and strengthen existing institutional arrangements and information sharing mechanisms to prevent incidents in border regions.

They also endorsed the work of the special representatives to find a fair, reasonable and mutually acceptable settlement on the boundary issue. The two countries have so far held 20 rounds of talks to resolve the boundary dispute and worked out different mechanisms to keep peace along the 3,488-km long Line of Actual Control. His remarks assumes significance as the 'heart-to-heart' summit between Modi and Xi is being seen as an effort by India and China to rebuild trust and improve ties that were hit by the 73-day-long Dokalam standoff last year.

"The two leaders were of the view that the two countries have the maturity and wisdom to handle all our differences through peaceful discussions within the context of the overall relationships and bearing in mind, we would respect each other's sensitivities, concerns and aspirations," Gokhale said. Modi and Xi underlined that as two major countries India and China have wider and overlapping regional and global interests. They agreed on the need to strengthen strategic communication through greater consultation on all matters of common interest. "They believe that such strategic communication will have a positive influence on enhancing mutual understanding and will contribute to regional and global stability," Gokhale said.

The two leaders recognised the common threat posed by terrorism and committed to cooperate further on counter-terrorism, he said. When asked whether the issue of Jaish-e-Mohammad chief Masood Azhar was raised, he said the two leaders "did not go into specifics". China has repeatedly blocked India's bid to designate Azhar as a global terrorist by the UN.  The two leaders agreed that India and China are major powers, with strategic and decisional autonomy and they will pursue peaceful, stable and balanced relations and such a relationship will be a positive factor for stability amidst the current global uncertainties, he said, amidst increasing protectionist moves by countries like the US.

"The developments were reviewed from the strategic and long-term perspective. They agreed to significantly enhance efforts to build on the convergences through the established mechanisms in order to create the broadest possible platform for the future relationship," Gokhale said. The two leaders underlined that trade should be balanced, it should be sustainable, and that the two sides should take advantage of the complementarities between the two economies.

Modi also mentioned the importance of balancing the trade, and the scope of the possibilities of agricultural exports and pharmaceutical exports to China.  The two sides also discussed climate change, sustainable development and food security.  Xi shared his experience in terms of the preservation of the Yangtze - China's longest river - and Modi shared his own experience on the question of the cleaning of the Ganga - India's longest river.

They also discussed how to promote sports between the two countries and how to strengthen tourism on the Buddhist circuit. "They reiterated the importance of building an open, multi-polar, pluralist and participatory global economic order which will enable all countries to pursue their development and contribute to the elimination of poverty and inequality in all regions of the world. They spoke of their respective efforts to contribute to the regional and global economic development," Gokhale said.

They also underscored the importance of reform of multilateral financial and political institutions to make them representative and responsive to the needs of developing countries. The forward-looking dialogue helped them in forging a common understanding of the future direction of India-China relations built upon mutual respect for each other's developmental aspirations and prudent management of differences with mutual sensitivity," he added.
(With PTI Inputs)