Prime Minister Narendra Modi on Saturday said India is trying to reduce its carbon footprint by 30-35 per cent and working to double its oil refining capacity in the next 5 years. 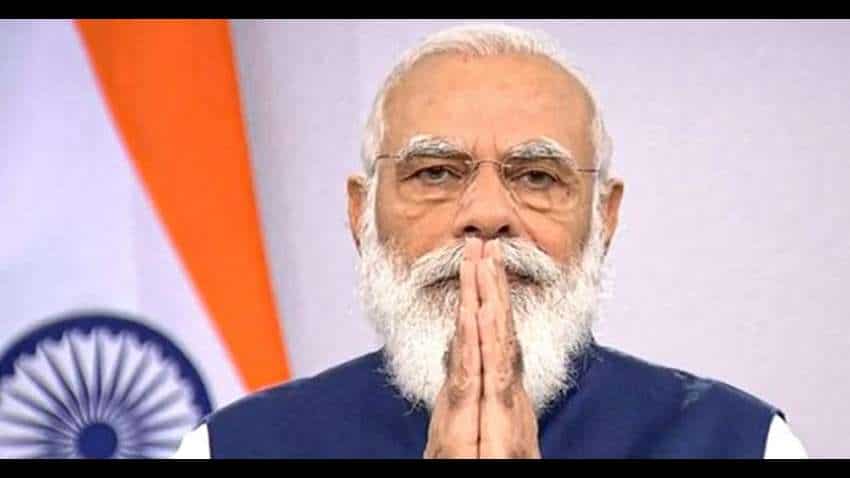 Prime Minister Narendra Modi on Saturday said India is trying to reduce its carbon footprint by 30-35 per cent and working to double its oil refining capacity in the next 5 years.

PM Modi stressed on Gujarat`s solar power movement and said that the energy sector can provide growth and jobs alike. He was virtually addressing the 8th Convocation of Pandit Deendayal Petroleum University in Gandhinagar.

"India is trying to reduce its carbon footprint by 30-35% today. The world was amazed when they got to know about it. We need to increase natural gas` usage by 4 times in our need for energy. We are also working to double the oil refining capacity of the nation in the next 5 years," the PM said.

He also said that India is moving swiftly on the solar energy scale.

"Today, the per unit cost has dropped from Rs 12-13 to under Rs 2," he claimed and added that Solar power has become an "integral part of the nation".

Though acknowledging that the students who are graduating on Saturday are facing an unusual time due to the pandemic, the Prime Minister told them to follow the 4-Ps`.

"It is not an easy thing to graduate at a time when the world is facing such a big crisis.

"But your abilities are much bigger than these challenges. More important than what the Problems are. It is what is your Purpose, Preference and Plan," he said.

The Prime Minister added that today, major changes were also taking place in the energy sector of the whole world. But in such a situation, there is limitless potential for growth, entrepreneurship and employment in this sector in India, he added.

"There was a time when people questioned how far such a university would be able to grow. But the students here, the professors and the professionals who have left here have answered all these questions," he said proudly.

He also highlighted that in the last 15 years, PDPU has widened its network in not just the petroleum sector, but all other energy sectors as well. Hence, he urged the Gujarat government to amend laws, if possible and convert the university into an `Energy University` from just being a `Petroleum University`.

Connecting the graduates with PM`s `Aatmanirbhar Bharat`, he said that he is confident that with their skill, talent and professionalism, they will emerge as a "big force of self-reliant India".

During the convocation, the Prime Minister also laid the foundation stone of "45 MW Production Plant of Monocrystalline Solar Photo Voltaic Panel" and "Centre of Excellence on Water Technology".

The convocation was also witness to the Prime Minister inaugurating other facilities like "Innovation and Incubation Centre - Technology Business Incubation".