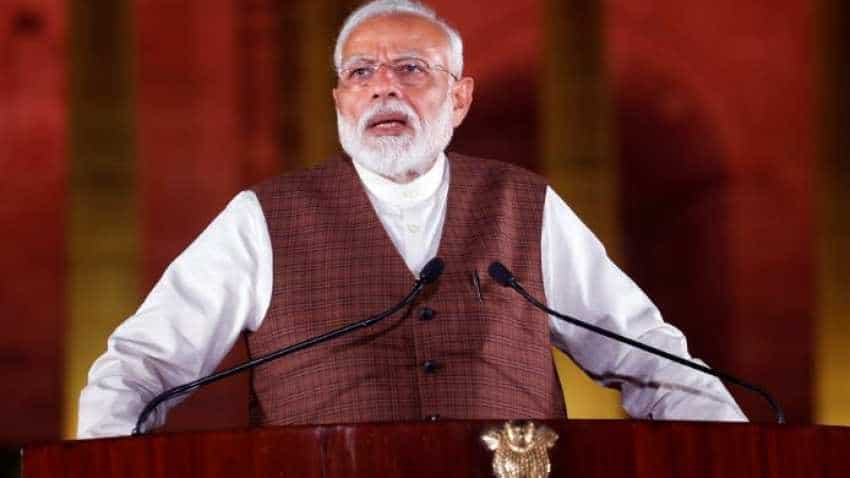 PM Modi was on Saturday elected as the leader of newly elected NDA MPs. He will now call on President Ram Nath Kovind to stake his claim to form the government. Reuters

Narendra Modi swearing-in ceremony 2019 date, time confirmed! PM-elect Narendra Modi will take oath as the Prime Minister once again on 30th May at 7pm at Rashtrapati Bhavan. Members of Union Council of Ministers will also take oath. "The President will administer the oath of Office and secrecy to the Prime Minister and other members of Union Council of Ministers on 30.05.2019 at 07.00 p.M.,"a communique from the Rashtrapati Bhavan said. Modi was elected as the leader of the NDA on Saturday.

Ahead of the swearing-in ceremony, several media reports have claimed that preparations are underway to invite world leaders, including the leaders of permanent five UNSC members, countries of South East and West Asia. However, the official sources in the government have denied such reports as mere speculations. News agency ANI reported government sources as saying yesterday, "There is speculation in the media about invitations to foreign dignitaries for the swearing-in ceremony. At the moment, we have no information on this matter. We will share details with the media once a decision is taken."

PM Modi was on Saturday elected as the leader of newly elected NDA MPs. He will now call on President Ram Nath Kovind to stake his claim to form the government. After this, he will be sworn in as the next prime minister.

Sri Lankan President Maithripala Sirisena will attend PM Modi's swearing-in ceremony on May 30. Sirisena spoke to PM Modi on Saturday. The Sri Lankan President tweeted on Friday after talking to PM Modi, "It was a pleasure to congratulate Prime Minister Modi (@narendramodi) over the phone a while ago. I shared thoughts that Sri Lanka too celebrates along with the world’s largest democracy, on his re-election. We look forward to work together to further develop our bilateral ties."

Warmly felicitating the Prime Minister, President Sirisena noted the enhanced engagements between the two neighbours and expressed his desire to further deepen the ties between the two countries.  The Prime Minister thanked the President of Sri Lanka and expressed his readiness to work even more closely for the benefit of the people of the two countries and the region.

Sincerely thanking the King of Saudi Arabia for his warm felicitations and good wishes for the progress and prosperity of the people of India, the Prime Minister conveyed his appreciation for the guidance of His Majesty to the bilateral relations between India and Saudi Arabia.

US President Trump congratulated the Prime Minister on the unprecedented electoral victory. The two leaders agreed to meet at the forthcoming G-20 Summit in Osaka, Japan, to discuss bilateral relations and global matters. They also agreed to work together for further enhancing the close and strategic partnership between the two countries.