Narendra Modi's address to the nation on Jammu and Kashmir, Article 370

Modi said, "I congratulate people of Jammu and Kashmir, Ladakh and the whole nation. When some things are their forever we presume they will never change or go away. Article 370 was something similar." 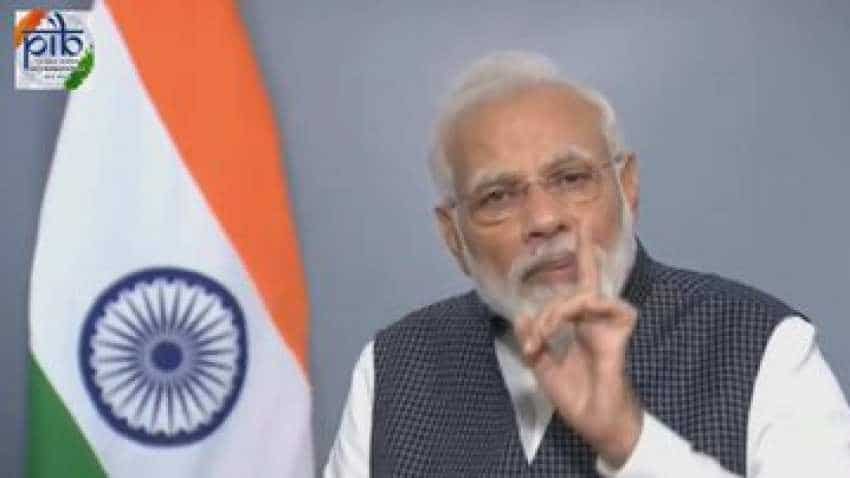 The Prime Minister`s speech comes ahead of his August 15 Independence Day speech at the Red Fort, where he spells out his vision for the nation. Image source: Twitter/PIB
Written By: ZeeBiz WebTeam
RELATED NEWS

Narendra Modi speech LIVE! Prime Minister is addressing the nation in a special broadcast to outline the government`s decision on abrogating special status of Jammu and Kashmir and splitting the state into two union territories as well as trashing Article 370. He said the dream of Sardar Patel, Baba Saheb Ambedkar, Dr Syama Prasad Mukherjee, Atalji and of crores of patriots has been fulfilled with this decision. Modi said, "I congratulate people of Jammu and Kashmir, Ladakh and the whole nation. When some things are their forever we presume they will never change or go away. Article 370 was something similar."

"You will be shocked, in Jammu and Kashmir for decades, lakhs and thousands of people had right to vote in Lok Sabha polls, but neither they could vote nor contest in assembly or local polls. These are those who came to India after partition in 1947. Should injustice have continued with them?" the prime minister said.

"I want to tell everyone that any problem of people of Jammu and Kashmir and Ladakh is also our problem. We are with them in their happy moments and their sad moments," the prime minister said, while mentioning the sacrifices done by people of the state.

The prime minister said, that decades of dynasty rule in J&K prevented the youth from political leadership, adding "Now my youth of J&K will lead the development work and take the region to new heights."

Modi said that Jammu Kashmir and Ladakh have the potential to be the biggest tourist hub of the world, adding "There was a time when Kashmir was the favorite destination of Bollywood film makers, I am confident that in future even international films will be shot there."

"In different states of the country sanitation workers come under the sanitation worker act, but workers from J&K were deprived of it. In many states strong laws are their to stop atrocities against dalits, but this was not the case in J&K," the PM said.

According to PM Modi , "We as a nation, as a family, have taken a historic decision. A system due to which brothers & sisters of Jammu, Kashmir & Ladakh were deprived of many rights & which was a big obstacle to their development, that system has been done away with."

He also rued that there has never been any discussion as to how Article 370 was adversely affecting the people of Jammu, Kashmir, and Ladakh. "And it is surprising, no one was able to really tell how did the article benefit the people," he added.

Notably, the Prime Minister`s speech comes ahead of his August 15 Independence Day speech at the Red Fort.

The government has planned to rope in big investors into the state, fast track the Srinagar Metro and involve people in the development process, all of which officials say were earlier being hampered by Article 370 of the Constitution that gave special status to Jammu and Kashmir.

With the separatists and pro-independence sympathisers under lockdown, the NDA government plans to roll out big developments in the two border Union Territories.

1. All vacant posts in Kashmir and Ladakh will be filled soon
2. Projects languishing for decades being pushed forward

3. It is the beginning of a "new era" in Jammu and Kashmir
4. Private firms would also be encouraged to generate employment opportunities
5. Work will be accelerated on all projects and projects related to road and rail will be initiated
6. The region has the potential to become the world`s biggest tourism destination
7. Filmmaking would provide employment
8. Assembly elections will be held in Jammu and Kashmir
9. People will have a Chief Minister, MLAs and ministers
10. J&K will touch new heights of development and attract people from all over the world
11. Ease of living will improve the lives of people in the region
12. In Ladakh, a plant called Solo, which is a boon to those living in high altitudes, can be sold worldwide as it has vast medicinal properties