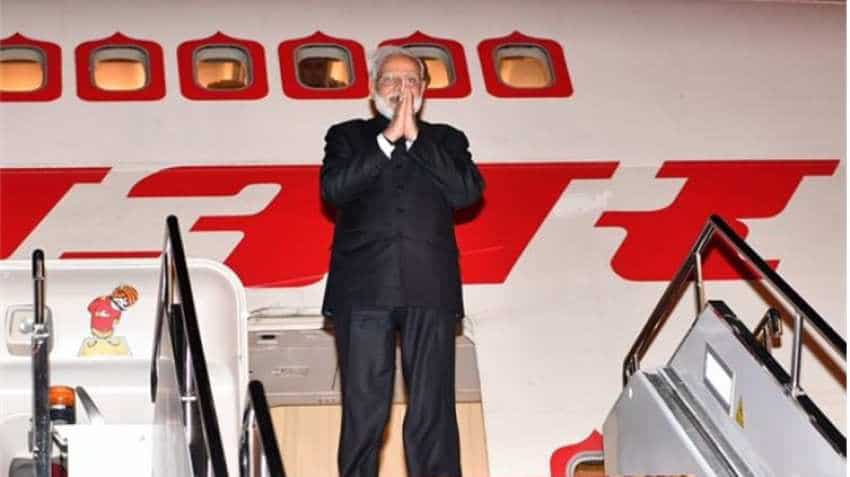 Niti Aayog Meeting 2019 Updates: Prime Minister Narendra Modi today chaired the Niti Aayog meeting today. In the fifth governing council meeting of the Niti Aayog, structural reforms in agriculture, drought situation and relief measures, challenges in transforming aspirational districts and security-related issues were expected to be high on the agenda. Chief Ministers of almost all the states attended the meet. West Bengal Chief Minister Mamata Banerjee gave the event a miss after writing to the Prime Minister that it was "fruitless" to attend the deliberations as the Niti Aayog had no financial power to support state plans. According to a statement issued by the Niti Aayog on Thursday, issues like rain-water harvesting, drought situation and relief measures, transforming aspirational districts as well as security-related issues with specific focus on Left Wing Extremism (LWE) hit districts are expected to be discussed at the meeting.

- PM Modi said, "We are now moving towards a governance system characterised by Performance, Transparency and Delivery. On-ground implementation of schemes is vital. I urge members of Governing Council to help create a govt setup which works & has the people's trust."

- "NITI Aayog has a key role to play in fulfilling the mantra of Sabka Saath, Sabka Vikas, Sabka Vishwas. We shall collectively fight against poverty, unemployment, drought, flood, pollution, corruption and violence."

- "The goal to make India a 5 trillion dollar economy by 2024, is challenging, but can surely be achieved. States should recognise their core competence and work towards raising GDP targets right from the district level," said PM.

- West Bengal Chief Minister Mamata Banerjee and her counterparts from Telangana K. Chandrashekhar Rao and Punjab Amarinder Singh are not attending the first meeting of the Niti Aayog governing council, chaired by Prime Minister Narendra Modi. Banerjee and Rao had also skipped the Modi`s swearing-ceremony on May 23.

- The discussion on the Essential Commodities Act, 1955, will focus on its need in the current scenario along with needed reforms and amendments in the Act. The Governing Council of NITI Aayog will deliberate upon these aspects and give their suggestions.

- The agenda will highlight the Government's initiatives towards achieving the target of Doubling Farmers’ Income by the year 2022. Focus will be given to ways for achieving high productivity, reducing cost of cultivation and ensuring remunerative price on the produce

The agenda at the Fifth Governing Council Meeting of #NITIAayog will focus on reforms for 'Transforming Agriculture', with special emphasis on Agriculture Produce Marketing Committee (APMC) Act and Essential Commodities Act, 1955. #FifthGCM pic.twitter.com/fmRZ0BIBsW

- The Aspirational Districts programme has successfully turned development into a Jan Aandolan (mass movement), within a year. It has become a model for cooperative, competitive and collaborative federalism. The discussion will focus on the achievements and challenges in the Aspirational Districts, pertaining to transformation in health, nutrition, education, agriculture, water resource management, financial inclusion, skill development and basic infrastructure.

- During the Fifth GCM of NITI Aayog, the agenda will highlight the impacts of droughts, forecast for 2019 monsoon season, responsibilities of Central and State Governments for monitoring, declaration, relief and mitigation in case of a drought.

- The Fifth GCM will discuss the need for all the States to implement schemes aimed at water conservation. The focus will be on steps taken by the Centre to encourage rainwater harvesting and groundwater recharge, good practices of rainwater harvesting, and way forward.

- The agenda will focus at ensuring piped water supply to every rural household by 2024 through integrated water resources management, including rainwater harvesting, groundwater recharge and grey wastewater reuse.

- The agenda at the Fifth Governing Council Meeting of NITI Aayog will focus on the internal security situation in the country with a specific focus on development in Left Wing Extremism (LWE) areas.

- The agenda at the Fifth Governing Council Meeting of NITI Aayog will focus on reforms for 'Transforming Agriculture', with special emphasis on Agriculture Produce Marketing Committee (APMC) Act and Essential Commodities Act, 1955.

- Niti Aayog said today, "Core areas of LWE influence have gaps in development and basic infrastructure. During the Fifth GCM, the Governing Council of  NITI Aayog will deliberate every avenue for strengthening the security apparatus and ensuring realisation of aspirations of the local communities."