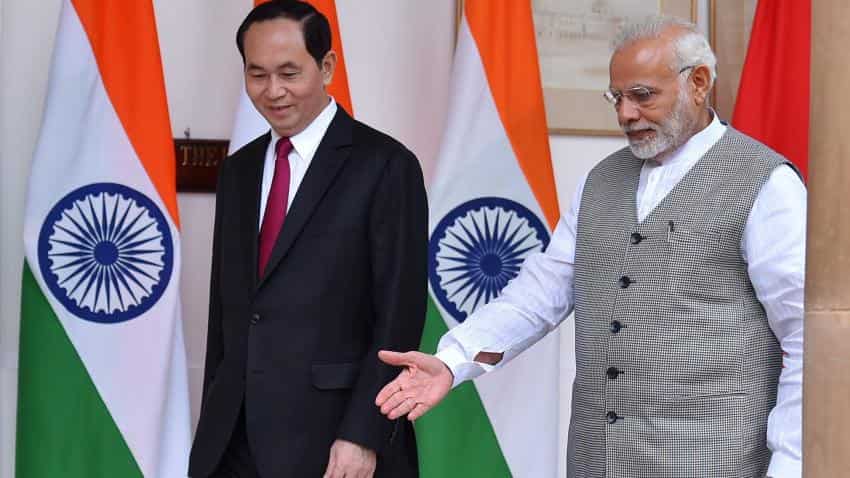 India and Vietnam today inked three pacts, including one on nuclear cooperation, and resolved to jointly work for an open Indo-Pacific, while calling for a rules-based regional architecture. In their talks, Prime Minister Narendra Modi and Vietnamese President Tran Dai Quang also vowed to expand bilateral cooperation in several key sectors, including defence, oil and gas, and agriculture.

"We will jointly work for an open, independent and prosperous Indo Pacific region where sovereignty and international laws are respected and where differences are resolved through talks," Modi said in a media statement in the presence of the Vietnamese President. "Both sides are committed towards expanding the bilateral maritime cooperation and for an open, efficient and rules-based regional architecture," he said.

The remarks come amid China's growing assertiveness in the region. On defence cooperation, the Prime Minister said both sides decided to collaborate in defence production and explore opportunities in transfer of technology.
During the talks, Modi said India and Vietnam have also "agreed" to deepen trade and investment ties in sectors such as oil and gas exploration, renewable energy, agriculture and textiles. The three pacts signed after the talks between the two leaders would provide for cooperation in areas of nuclear energy, trade and agriculture.

Earlier in the day, External Affairs Minister Sushma Swaraj called on the Vietnamese president. Their discussions focused on steps to further strengthen country's comprehensive strategic partnership by expanding cooperation across all sectors, Ministry of External Affairs Spokesperson Raveesh Kumar said.
Quang was also given a ceremonial reception at the Rashtrapati Bhavan.