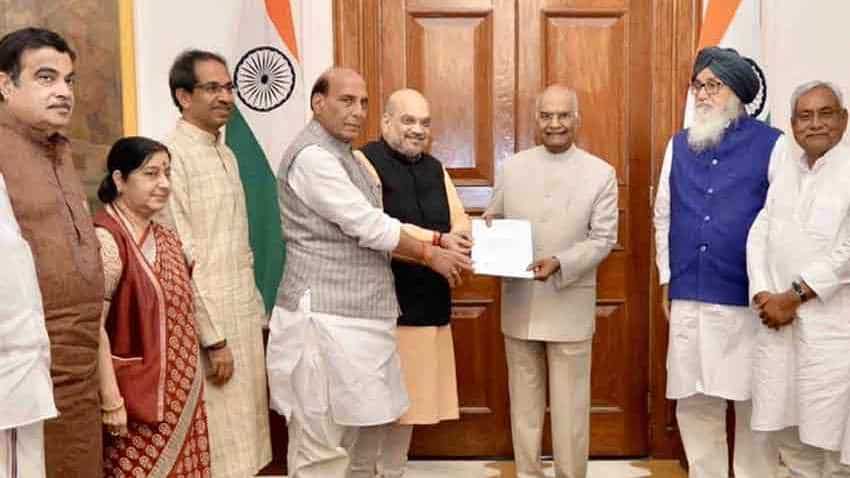 After this meeting, Rajnath Singh also met Prime Minister Narendra Modi. Many changes are being expected in the Modi cabinet with Amit Shah likely to get finance ministry in place of Arun Jaitley. Sources have told Zee Business TV that in this case JP Nadda might takeover as the new BJP president.

Meanwhile, Modi visited Union Finance Minister Arun Jaitley at his residence, hours after he opted out of the Union Cabinet citing health conditions. The meeting came against the backdrop of the letter written by Jaitley to Modi earlier in the day asking him not to include him in the new cabinet, citing health issues. Modi inquired about Jaitley`s health during the meeting. Jaitley has been a key leader of the government, one of its most articulate faces and a key trouble shooter.

In his letter, Jaitley had said: "During the last 18 months, I have had some serious health challenges. My doctors have enabled me to emerge out of most of them. I am writing to you formally to request you that I should be allowed a reasonable time to myself, my treatment and my health and therefore not be a part of any responsibility, for the present in the new government," he said.

Jaitley said that he had already communicated his request to Modi before the latter left for Kedarnath. "I would in future, for some time, like to keep away from any responsibility. This will enable me to concentrate on my treatment and health," the letter read. Modi had submitted resignation of his council of ministers last week after the results of Lok Sabha elections. President Ram Nath Kovind had accepted the resignations and asked the Prime Minister to continue till the new government assumes office.