Heavy rains continued to lash Mumbai and the entire coastal Konkan region on Wednesday, with waterlogging reported from many areas and authorities advising people to remain indoors. 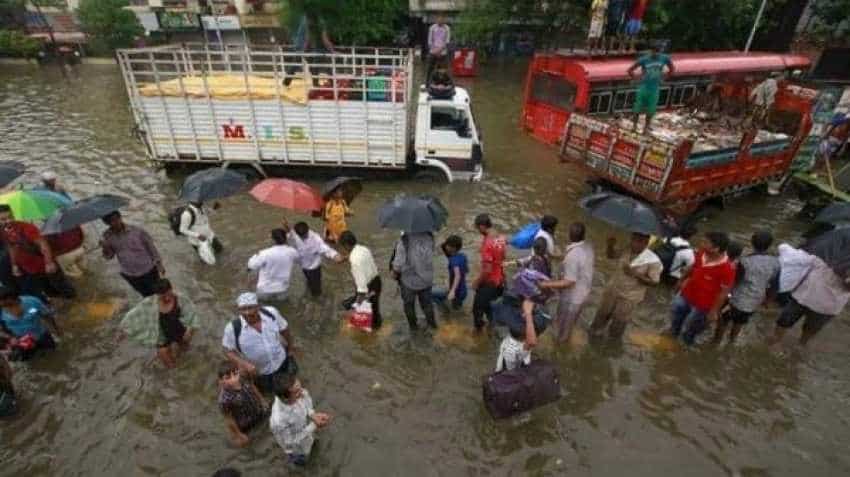 Mumbai Rains: Heavy rains continued to lash Mumbai and the entire coastal Konkan region on Wednesday, with waterlogging reported from many areas and authorities advising people to remain indoors. Around 1,300 people were evacuated by the National Disaster Response Force (NDRF) teams from Bail Bazar in Kurla, where water levels reached four-five feet owing to the flooded Mithi river nearby.

"Heavy rains that started on Tuesday night slowed down Mumbai on Wednesday morning, and by noon, the city had recorded 30.4 mm. Santacruz recorded 121.4 mm rainfall," said the Mumbai unit of India Meteorological Department.

As a precautionary measure, the Brihan Mumbai Municipal Corporation (BMC) ordered all schools (government and private) in the city to remain shut for the day, said the BMC Disaster Control.

"The principals of all schools where students had already reached, were directed to ensure their safe return home," an official told IANS.

Traffic, though disrupted, continued to move at a snail`s place, resulting in huge traffic snarls in the two highways, the main roads, link roads and arterial roads in the city.

Among the main roads that were submerged were tracts of Lal Bahadur Shastri Marg in the eastern suburbs and Swami Vivekananda Road in the western suburbs, portions of the Jogeshwari-Vikhroli Link Road, Santacruz-Chembur Link Road and other internal roads.

"All Ganeshotsav mandals are requested to check for any water seepage and whether any power lines are touching the water. They must exercise extreme caution and switch off power supply to the marquees (pandals) to ensure safety of all," Dahibavkar said.

The Western Railway (WR) had to suspended suburban and long distance services on the Vasai-Virar sector (Palghar) after the railway tracks were submerged under over three feet water. "The services continued with delays on the Vasai-Churchgate sector," said a WR spokesperson.

The Central Railway (CR) services continued to limp with average 25-30 minutes delays, but by noon, it had suspended all services between Thane and Chhatrapati Shivaji Maharaj Terminus (CSMT) owing to waterlogging on tracks between Sion-Bandra, said a CR official.

Incoming and outgoing flight operations at the Mumbai Airport were near normal with delays of around 15 minutes despite the downpour and fluctuating visibility levels.

The IMD has forecast heavy rains in Mumbai and surrounding areas over the next 2-3 days.