Mumbai airport delayed flights: It has been 13 hours now since the downpour started and Chhatrapati Shivaji International Airport has already announced that 216 departing flights and 171 arriving flights have been delayed today. 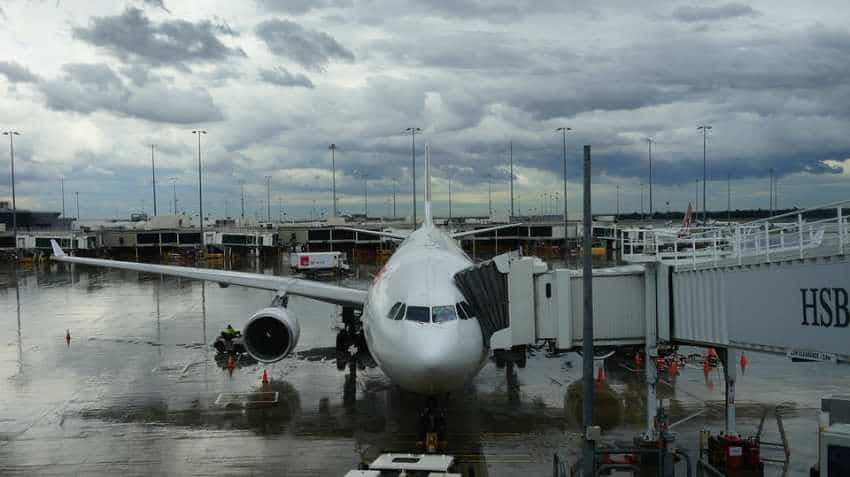 Nothing seems to go well for Mumbai during monsoon time. The city which never sleeps and is considered as major financial hub in India, sees its worst days when heavy rains come and that happens every monsoon. The same has held true in this city for over a decade now. Every time there is heavy rain, most of Mumbai suffers through waterlogging and this specifically affects Railways and airport. Today was no different, as Mumbai witnessed heavy showers from early hours of Sunday. Since then massive delays in airlines have taken place, The Railways trains too are going slow. Even Central Railways had to cancel mega block due to heavy rains. The problem is expected to continue as per weather forecaster Skymet. At least for another 48 hours, Mumbai is going to face heavy rains, this is a big cause of concern for passengers who are travelling today especially via airlines.

It has been 13 hours now since the downpour started and Chhatrapati Shivaji International Airport has already announced that 216 departing flights and 171 arriving flights have been delayed today. The number of delays can rise further once rains intensify. So far, the forecast was till 12:58 hours today.

The rains began at 12 am and from then within 3 hours, 31 flights departing flights and 44 arrivals were delayed at Mumbai airport up till 3 am.

However from 3 am to 6 am today, the delay count slowed down to 10 flights in departure mode and 16 in arrival mode.

But as the rains got heavier from 6am to 9am, a massive 110 departing flights were delayed from Mumbai and 16 arrivals.

Majority of the flights that took a hit in today due to rain were Indigo, Jet Airways and even Air India. Check here the status of your flights from Mumbai airport. 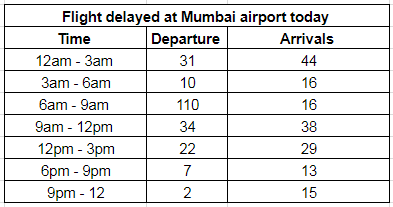 If we take into consideration both departure and arrivals, then Mumbai airport has announced a delay of some 387 flights today.

Considering that the rain is unlikely to go away any time soon, airlines like Jet Airways and Vistara have cautioned their passengers travelling today.

Jet Airways through its Twitter handle said, “#9Wupdate: Due to heavy rains in #Mumbai, guests are requested to plan their travel accordingly for seamless check-in & boarding.”

#9Wupdate: Due to heavy rains in #Mumbai, guests are requested to plan their travel accordingly for seamless check-in & boarding. Pls check your flight status here: https://t.co/q3TCmCPN0Q

There is also a helpline number 3989 3333* given by the airline. Also to check flight status at Jet Airways one can connect with them on Facebook and Twitter.

Vistara said, “#TravelUpdate Due to heavy traffic congestion between Western Express Highway and roads connecting towards Mumbai Airport are blocked, customers travelling from Mumbai are advised to allow more time for their journey to the airport.”

#TravelUpdate Due to heavy traffic congestion between Western Express Highway and roads connecting towards Mumbai Airport are blocked, customers travelling from Mumbai are advised to allow more time for their journey to the airport.

Weather forecaster Skymet says, “Mumbai rains have been playing hide and seek for quite a long time with some days seeing intense rainfall activities while the others only settling with light showers. The former situation was witnessed over the commercial capital of the country during the last 24 hours wherein three-digit rains in the city caused waterlogging and traffic chaos over many areas of the city.”

Interesting facts of Mumbai and rains this monsoon is that, heavy rains are mostly witnessed during weekend time which is Saturday and Sunday. Skymet says, “It seems like weekend and Mumbai rains are running at sync with each other as since the beginning of June, there have been several occasions wherein heavy showers have been observed on a Saturday or a Sunday.”

According to Skymet, in last 24 hours, from 8:30 am on Saturday, Santa Cruz observatory recorded massive three-digit rains to the tune of 131 mm. However, rains were on the moderate side for Colaba which recorded just about 33 mm of rainfall. The suburbs of the city also saw heavy rains wherein Thane recorded a whopping 163 mm of rains.

Now, as per weathermen at Skymet Weather, on and off heavy rains are expected to continue for another 48 hours. There may be waterlogging and traffic chaos in some pockets, but the good news is that there will be occasional breaks in between and rains will not be on a continuous basis.