Should you buy or sell? Let’s find out your yay and nay stocks of today's share bazaar

The negative impact in Indian markets is due to global peers which are also reeling in red. 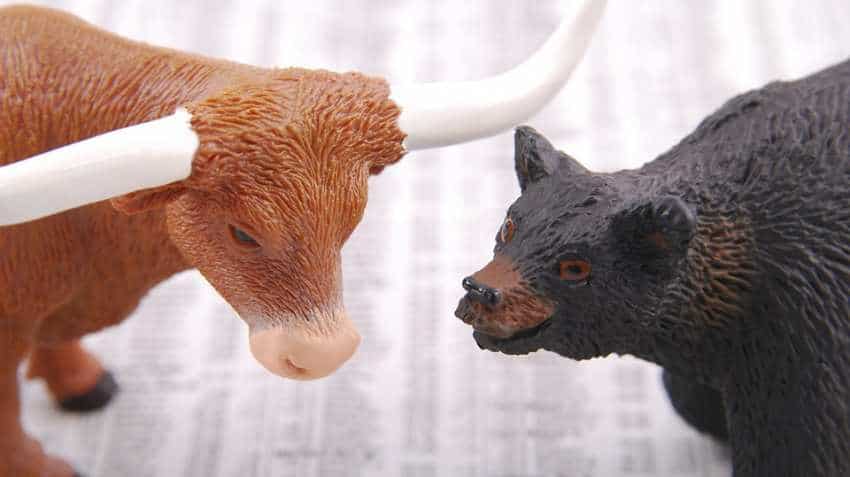 It was not a positive Monday on Dalal Street with benchmark Sensex giving away its 38,000-mark. Photo: Pixabay
Written By: ZeeBiz WebTeam
RELATED NEWS

It was not a positive Monday on Dalal Street with benchmark Sensex giving away its 38,000-mark. Sensex has tumbled by over 381 points in just a few hours of Monday’s trading session, however, at around 1111 hours, the index was trading at 37,811.97 down by 352 points or 0.92%. A similar bloodbath was witnessed in Nifty 50 as well. The 51-scrip index was trading at 11,352.60 below 104 points or 0.91%, however, an intraday low of 11,342.90 was recorded in early hours. The negative impact in Indian markets is led due to global peers which are also reeling in red. Even Indian rupee kicked off this week, by depreciating by 16 paise to 69.11 against US dollar benchmark indices at interbank forex market.

Amar Ambani, Head of Research at Yes Securities in his research note said, “Concerns about health of the world economy came to fore as cautious remarks by US Fed sent 10-year treasury yields to the lowest level since early 2018. As a result, US indices posted their biggest one-day drop since January 03. Asian indices are reeling in red, suggesting follow-on move on the downside for Indian markets. Disappointing data from Europe, Fed’s downgraded outlook has contributed to weakness.”

With this, it becomes of utmost important to make investment wisely. Hence, if you are planning to sell or buy or hold any stocks on stock exchanges, then here’s a list of stocks you should look upon.

Analysts at Spark Capital have given their views on three stocks. They are:

1. TeamLease (Rating: BUY, TP of Rs 3,350) - Analysts said, “We reiterate our BUY rating on TeamLease led by its superior cash conversion (pre-tax OCF/EBITDA >100% during FY14-18 except for FY16) compared to peers like Quess Corp, along with the prospects of high organic revenue growth and margin improvement going forward. While the organic revenue growth (~20% CAGR during FY19-22E) prospects remains strong, the scope of margin improvement is significant for TeamLease.”

4. Sadbhav Engineering - CLSA said, Sadbhav could secure O&M annuities and platform to divest future projects, as is the case with most strategic deals. Execution in its core E&C business is likely to pick-up as 49% of its backlog of US$1.8bn (+33% YoY) that couldn’t start execution until 3Q, shall start. BUY Sadbhav as we like its focus and new strategy to churn capital (43% of SoTP) should reach fruition in 1H19.

5. NOCIL - Analysts at Prabhudas Lilladher said, “Nocil is well placed to capitalize on this demand as completion of Phase 2 expansion will double its capacity (1,10,000 tons by October 2019, ~10% of global capacity) as global Tyre players are eyeing more non-Chinese supplies. Nocil is confident of maintaining 25% EBIDTA margins in the medium term despite removal of duty protection. Retain Buy with PT of Rs252 based on 15x FY21E PER.”

6. Maruti Suzuki - ICICI Securities said, “Incorporating YTDFY19 volume numbers and pencilling in volume growth of 5% CAGR in FY18-20E, we expect sales, PAT at MSIL to grow at a CAGR of 5.4%, 3.3%, respectively. There is limited scope for margin improvement given high discounting in the marketplace as well as elevated commodity prices, leading us to build marginal 50 bps margin improvement in FY20E, over FY19E. We value Maruti at Rs 6,000 i.e. 22x P/E on FY20E EPS of | 272.6 with a SELL rating on the stock.”

8. Aurobindo Pharma - Prabhudas Lilladher stated that, we believe that a large part of valuation gap was attributed due to lack in India formulations. Factoring lack of significant presence in India, we value ARBP at 20% discount to its peers and retain TP at Rs952 (PE 16x of FY21E). We maintain ‘Buy’.

9. GMR Infrastructure - Edelweiss Securities stated that, GMR Infrastructure (GMR) has awarded the commercial development rights for about 9.7msf at Delhi Airport (DIAL) to Bharti Realty (Bharti) broken down into two phases of about 4.8msf each. We view this deal as positive for GMR since it demonstrates its ability to steadily monetise DIAL land that would also help partially fund capex worth about Rs 90 billion earmarked for DIAL. Maintain ‘BUY’ with an SoTP-based target price of Rs 23/share.

10. Brigade Enterprises - Motilal Oswal stated that, We are particularly enthused with the ongoing traction in pre-leasing and residential sales. Our estimates factor in revenue potential from the SABMiller land parcel. We maintain our Buy rating on the company and raise our target price to Rs 316, implying an upside of 28%.

Hence, on Monday’s trading session, the above mentioned stocks can be your bet.