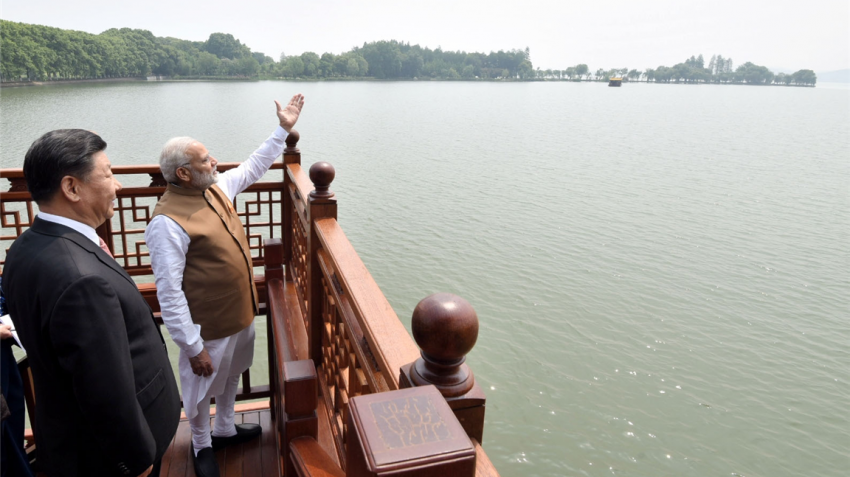 Prime Minister Narendra Modi and Chinese President Xi Jinping today walked along a sidewalk on the shores of the picturesque East Lake here and later sailed in the same boat for "peace, prosperity and development" in a relaxed and friendly atmosphere. Modi and Xi today began their last round of one-on-one talks on the second day of a two-day informal summit aimed at forging consensus to improve the bilateral relations and address the contentious issues bedevilling their ties.

"President Xi Jinping and I continued our deliberations this morning... We discussed multiple aspects of bilateral ties between our nations," Modi tweeted. Earlier, the two leaders were seen actively engaging with each other while walking by the lake and having productive discussions over tea. Also, no aides except their translators were present with them.  "Productive discussions over tea. Strong India-China friendship is beneficial for the people of our nations and the entire world," Modi said.

"The talks with President Xi Jinping focussed on diverse areas of India-China cooperation. We discussed ways to give impetus to our economic ties as well as people-to-people relations. Other areas we spoke about include agriculture, technology, energy and tourism," Modi tweeted. After the walk, Modi and Xi sailed in the same boat for peace, prosperity and development! at the East Lake.

"Sailing in the same boat for peace, prosperity and development! PM @narendramodi and Chinese President Xi on a boat ride in the East Lake in Wuhan," Ministry of External Affairs spokesperson Raveesh Kumar tweeted along with pictures of the two leaders. "A memorable boat ride on the beautiful East Lake, which is a prized landmark of Wuhan," Modi tweeted. The East Lake, a large freshwater lake in Wuhan city, is the largest urban lake in China. It is one of the most popular tourist sites in the country, with over a million visiting the lake annually. This was followed by a private lunch hosted by President Xi in honour of Prime Minister Modi.