Stating that innovation, investment, start-ups, manufacturing were among the main areas of cooperation between the two countries, he said that attention was also paid to renewable energy, urban transport and waste management to improve the quality of life of the Indian people. 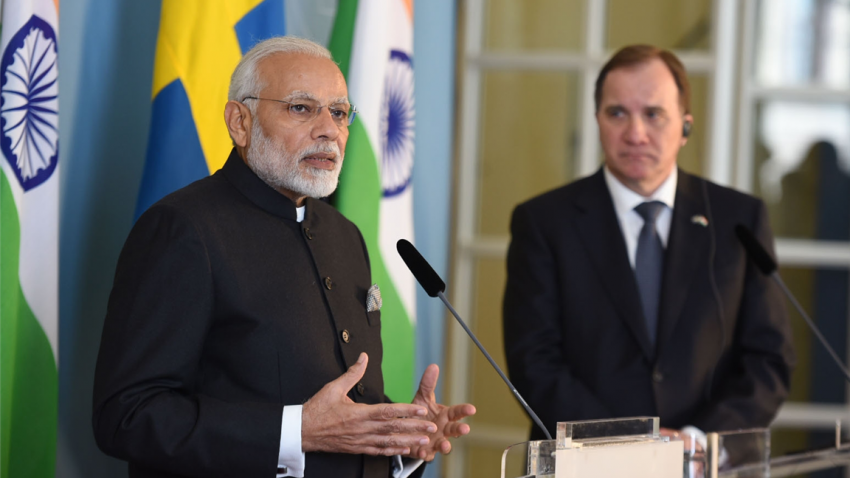 With the aim to build a win-win partnership with Sweden making use of the opportunities offered by India`s development programmes, the two countries on Tuesday signed a Joint Action Plan and an Innovation Partnership following a bilateral summit between Prime Minister Narendra Modi and his Swedish counterpart Stefan Lofven here. Jointly addressing the media here along with Lofven after their talks, Modi said that Sweden has been a strong contributor to the Make in India programme from the beginning and recalled that the Swedish Prime Minister himself led a big business delegation to the Make in India summit in Mumbai in 2016.

"The main theme of our discussions today was how to develop a win-win partnership between Sweden and India through the opportunities offered by India`s development programmes," Modi said. "As a result, we agreed to a Joint Action Plan and an Innovation Partnership."

Stating that innovation, investment, start-ups, manufacturing were among the main areas of cooperation between the two countries, he said that attention was also paid to renewable energy, urban transport and waste management to improve the quality of life of the Indian people.

According to the Joint Action Plan, both sides will initiate a multi-stake holder Innovation Partnership for a Sustainable Future, underpinning the mutual commitment to drive prosperity and growth and address societal challenges such as climate change and sustainable development through innovation.

The two sides also agreed to exchange know-how and explore cooperation in the areas of electro-mobility as well as renewable fuels.

The Joint Action Plan aims to deepen collaboration between the two countries in smart, sustainable and renewable energy, women`s skills development and empowerment, space and science, and health and life sciences.

"Defence and security is an important pillar of our bilateral relationship," Modi said in his address to the media.

"Sweden has been partner of India in defence sector for a long time. I am confident that new opportunities for cooperation in this sector will arise in the future, especially in defence production."

According to the Joint Action Plan, both sides agreed to explore the finalisation of a bilateral agreement on exchange and mutual protection of classified information for cooperation in the defence area and encourage industry partners to develop supply chains for small and medium sized enterprises with major defence and aerospace original equipment manufacturers.

"One more thing that we have agreed upon is that the importance of our relationship should be reflected at the regional and global levels," Modi said. "We have been closely cooperating on the international platform and this will continue."

Modi also said developments in Europe and Asia came up for detailed discussion during the bilateral summit.

According to the Joint Action Plan, both sides "reaffirmed the need for reform of the UN Security Council, including its expansion, to make it more representative, accountable, effective, and responsive to the realities of the 21st century".

"Both Prime Ministers called for greater unity and stronger international partnership to counter terrorism, disrupt terrorist networks and financing, and to prevent violent extremism," it stated.

On his part, Lofven said that he believed that Sweden and India make a perfect match.

Stating that India is undergoing an unprecedented economic transformation, he said that Sweden has a lot of innovative solutions to offer in this connection. "I am very pleased to announce that the Swedish government will kick start our Innovation Partnership by providing up to 50 million Swedish kronor (Over $59 million) for innovation cooperation with India in the field of smart cities and sustainability," Lofven said.

Following the summit, Modi and Lofven participated in a round table with Swedish CEOs during which the CEOs were exhorted to invest in India and participate in the country`s flagship initiatives, External Affairs Ministry spokesperson Ravessh Kumar said in a tweet.

Earlier in the day, Modi called on Sweden`s King Carl XVI Gustaf at the Royal Palace here and the two leaders exchanged views on strengthening bilateral cooperation. India and Sweden will on Tuesday also co-host the first ever India-Nordic Summit, where, apart from Modi and Lofven, the Prime Ministers of the other four Nordic countries of Denmark, Finland, Iceland and Norway will also be present.

Modi will hold separate bilateral meetings with the leaders of the other four Nordic countries on the sidelines of the summit.

The Indian Prime Minister arrived here on Monday evening on the first leg of his three-nation tour of Europe that will also see him going to Britain and Germany.

This is the first prime ministerial visit from India to Sweden in 30 years after the visit of then Prime Minister Rajiv Gandhi in 1988.

After attending an Indian community event here late on Tuesday night, Modi will depart for London on the second leg of his tour.