Union minister Pralhad Joshi on Saturday announced that the Centre would invest more than Rs one lakh crore in the next three to four years to increase the country's coal production. 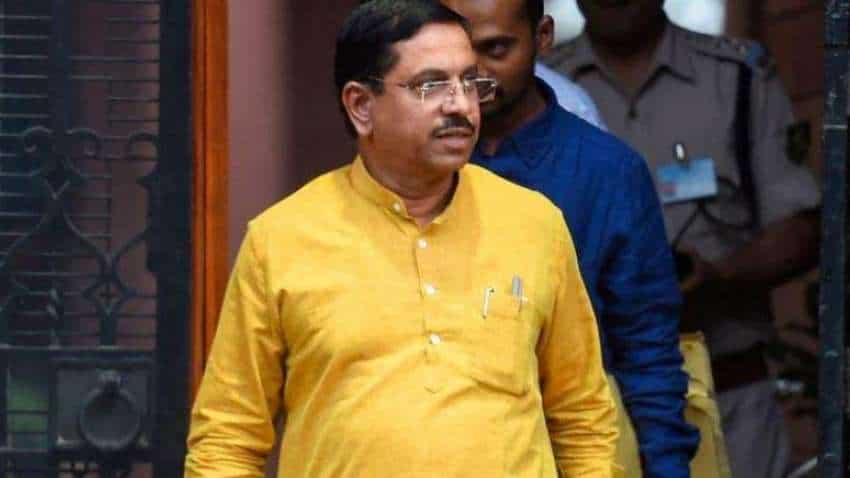 Joshi said that 75 to 80 per cent of the country's electricity is generated using coal. Photo: PTI
Written By: PTI
RELATED NEWS

Union minister Pralhad Joshi on Saturday announced that the Centre would invest more than Rs one lakh crore in the next three to four years to increase the country's coal production and to augment facilities for its off-take and transportation. He said steps were being taken to reduce the import of coal.

He was speaking at the virtual inauguration of Western Coal Field's (WCL) one underground mine in Adasa-Nagpur in Maharashtra and two underground mines in Sharda and Dhankasa in Madhya Pradesh with a total capital expenditure of Rs 849 crore.

Joshi said that 75 to 80 per cent of the country's electricity is generated using coal. He said the Coal India Ltd (CIL) has been given the specific target of one billion tonnes of production by 2023-24 and for that 60 new coal blocks have been allotted to it.

"The CIL has coal reserves of about (next) 100 years. We are investing a huge amount of money...More than Rs one lakh crore in the next three to four years for coal production, coal off-take and transportation. We will come out with the details after taking guidelines from and holding consultations with prime minister," he said.

"Unfortunately, despite India having five largest coal reserves in the world, we imported 200 to 240 million tonnes of coal in 2019-20 as the international prices were also down. Some other factors were also involved in it. But the overall import is continually increasing," the Union Coal Minister lamented.

He said that even if the CIL produces one billion tonnes in 2023-24 as per the target, there will be a shortfall.

"Keeping that in mind, we have recently announced commercial coal mining and its terms and conditions are very industry-friendly," Joshi added.

He said steps were being taken for coal gasification. "A feasibility report has been prepared and the tender process is underway," he said.

Similarly, steps will be taken for improving the quality of coal, he said, adding that under 'Atmanibhar Bharat Abhiyan' many new policy decisions are being introduced, like removal of end use restriction.

Besides, 20 per cent rebate in royalty will be given to private players if they experiment in coal gasification, he said.

Joshi said that in the next one month, the government would announce auction of 50 to 60 per cent mines of other minerals.

During his address, Gadkari emphasized the need to improve the quality of coal, reduce the import of coal, and suggested that steps be taken for coal gasification and utilisation of sand left after mining for affordable houses, among other things.

Abnormal proteins in the gut linked to Alzheimer's Disease