Amit Shah is set to combine his astute political mind with his delivery skills to help his mentor Prime Minister Narendra Modi implement his governance agenda. 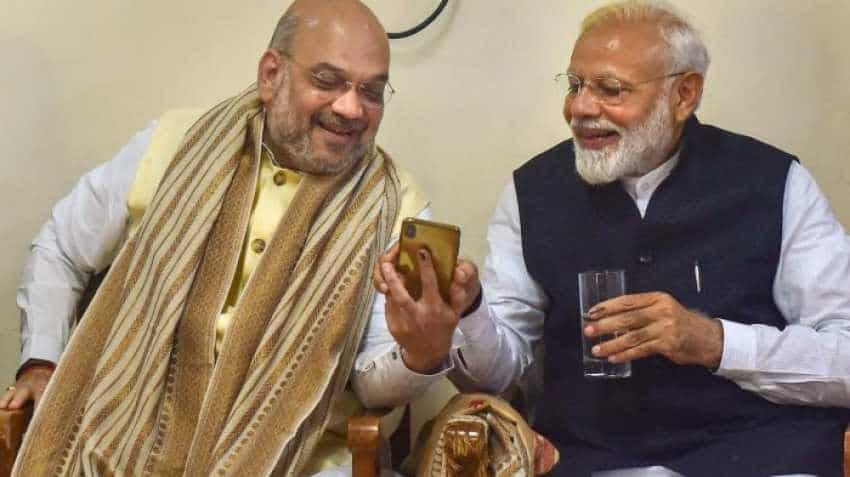 Modi's decision to bring Shah in his cabinet signals that he will now play a crucial role in the government, effectively the go-to man for the PM. Photo: PTI

With the task of galvanising the BJP's organisational machinery to craft a return of the Modi government done, party president Amit Shah is set to combine his astute political mind with his delivery skills to help his mentor Prime Minister Narendra Modi implement his governance agenda in the next five years. Modi's decision to bring Shah in his cabinet signals that he will now play a crucial role in the government, effectively the go-to man for the prime minister, several party leaders believe.

However, Rajnath Singh will remain officially the number two in the government, as made clear by him being the first minister to take oath after Modi.

For all practical purposes, he has been the party's second most powerful leader after Modi since he became its president in 2014 after the BJP-led NDA assumed power.
Shah made his debut in Lok Sabha with a massive win from Gandhinagar, a seat earlier represented by BJP veteran L K Advani.

Shah (54) was a crucial aide to Modi during his near 13-year-old reign as Gujarat chief minister between 2001-14, holding the powerful home portfolio during which he also got embroiled in a case of alleged fake encounter. He was discharged from it.

Though his organisational skills are much-storied since he delivered 71 of 80 Lok Sabha seats of Uttar Pradesh in 2014, prompting Modi to call him "man of the match" of the BJP's win in that general election, BJP leaders say he was also instrumental in executive a number of welfare policies of the party's government in Gujarat.

Unapologetic of his hardcore nationalism and Hindutva agenda, Shah's presence in the government is set to enthuse the party's base, which has grown in leaps and bounds under his tenure, and gives the signal that the Modi dispensation may pursue its ideological agenda with even bigger vigour in its new avatar.

He has strongly supported the expansion of National Register of Citizens in different parts of the country to identify and expel illegal immigrants, whom he has termed "termites", scrapping of Article 370 and 35A, which gives special powers to Jammu and Kashmir, and building of Ram temple in Ayodhya.

BJP leaders said Shah also strongly believes in the pro-poor and development agenda of the government to win over the masses, an aim the party successfully achieved in this election by drawing votes from a huge chunk of backwards and Dalits.

A keen political mind who is known to spend hours with his colleagues discussing nitty-gritty of specific constituencies, Shah's presence in the government is unlikely to wane his interest in the party's organisational agenda and he will continue to be a key influencer in setting its agenda, party leaders said.

Known as an astute strategist whose non-political interests range from playing chess and watching cricket to stage performances and listening to classical music, Shah is often hailed as the BJP's most successful president for crafting its way to power states after states before orchestrating its biggest Lok Sabha win.

The BJP won 303 of the 542 Lok Sabha seats, 21 more than the last time.
Shah has been associated with the BJP since he was 14 years of age and has risen through its ranks.